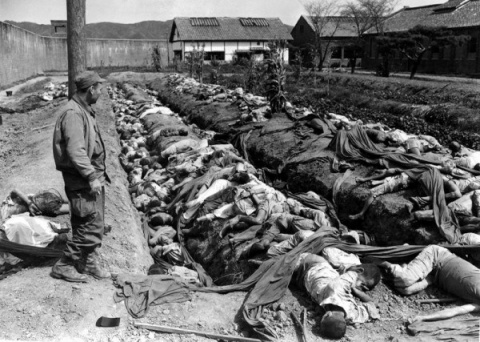 September 1950 - A war correspondent reviews about 400 victims killed and buried in Dajeon Prison, after digging their own graves.

In December 1951, the then US Secretary of Defense ordered early readiness for offensive use of biological weapons. [1]

The official consensus in China is that biological weapons created from an American-Japanese collaboration were used in the Korean war. The International Association of Democratic Lawyers (IADL) publicized these claims in its 1952 "Report on U.S. Crimes in Korea",[24] as did US journalist John W. Powell.[25] [2]

Moreover, US soldiers were publicly confessing to involvement in projects to use bioweapons.

The U.S. military and government laid charges of brainwashing in an effort to undermine confessions made by POWs to war crimes, including biological warfare. Scientific research into the topic of "brainwashing" that followed is tilted toward wartime propaganda to this day (2021).

The active war was concluded by a temporary cease fire, albeit one which lasted over 60 years. In 2018, North Korean leader Kim Jong Un and South Korean President Moon Jae-in agreed to formally end the Korean war by the end of the year.[3]

Statistics vary widely about the number of killed and injured by the Korean War, but it is agreed to be in the millions.[4]