From Wikispooks
(Redirected from Sunak)
Jump to navigation Jump to search

Rishi Sunak is a British Conservative Party politician who is Prime Minister of the United Kingdom. He was Chancellor of the Exchequer from 13 February 2020[1] until he resigned on 5 July 2022.[2]

He was previously Chief Secretary to the Treasury from July 2019 to February 2020, and has been the Member of Parliament (MP) for Richmond (Yorks) since the UK/General election/2015.

On 20 October 2022, Liz Truss announced she would resign as Prime Minister, saying there would be a leadership election within a week.[5] Rishi Sunak was elected Leader of the Conservative Party on 24 October 2022 and appointed Prime Minister of the United Kingdom by King Charles III upon the resignation of Liz Truss on 25 October 2022.[6]

Born in Southampton, Hampshire to an Indian Punjabi family, Rishi Sunak's early education was head boy at Winchester College. Sunak subsequently studied Philosophy, Politics and Economics (PPE) at Lincoln College, Oxford, and later gained an MBA from Stanford Graduate School of Business as a Fulbright scholar in 2006. None of his Stanford professors remembers him ever attending.[7]

Rishi Sunak is a Hindu, and took his oath as an MP at the House of Commons on the Bhagavad Gita. In August 2009, he married Akshata Murty, the daughter of the Indian billionaire N. R. Narayana Murthy, the founder of the technology company Infosys. Akshata Murty owns a 0.91% stake—valued at about $900m (£746m) in April 2022—in Infosys, making her one of the wealthiest women in Britain.[8]

Sunak and Murty met while studying at Stanford University; they have two daughters. Murty is a director of her father's investment firm, Catamaran Ventures. They own Kirby Sigston Manor in the village of Kirby Sigston, North Yorkshire, as well as a mews house in Earl's Court in central London, a flat on the Old Brompton Road, South Kensington, and a penthouse apartment on Ocean Avenue in Santa Monica, California. Sunak is a teetotaller, and has stated he is a fan of Coca-Cola. He was previously a governor of the East London Science School. Sunak has a Labrador called Nova and is a cricket, tennis and horse racing enthusiast.[9]

Sunak's brother Sanjay is a psychologist. His sister Raakhi is the Chief of Strategy and Planning at Education Cannot Wait, the United Nations global fund for education. Sunak is close friends with The Spectator's political editor James Forsyth, whom he has known since their school days. Sunak was the best man at Forsyth's wedding to the journalist Allegra Stratton, and they are godparents to each other's children. In April 2022, it was reported that Sunak and Murty had moved out of 11 Downing Street to a newly refurbished West London home. The Sunday Times Rich List 2022 named Sunak and Murty the 222nd wealthiest people in the UK, with an estimated combined wealth of £730 million, making Sunak the "first frontline politician to join the rich list".[10] 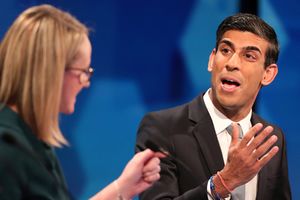 In a televised debate during the UK/2019 General Election campaign, Labour's Rebecca Long-Bailey rubbished Rishi Sunak, representing the Tories, when he said the last Labour government had crashed the economy:

“We suffered a world banking crisis: your Chancellor (Sajid Javid) was working at Deutsche Bank, selling the very derivatives that caused the crash in the first place."[11]

And she rubbished his claims about the impact of Labour’s plans, retorting:

"Secondly, when you talk about reckless spending plans, I think you were referred to recently in the media talking about the figure of £1.2 trillion spends which is a fabricated lie that the Conservative Party have been perpetrating over the last few weeks. We're the only party with a credible and detailed costing plan, to outline our plans and I haven't seen any costings for your party whatsoever."[12]

This page imported content from Wikipedia on 13 February 2020.
Wikipedia is not affiliated with Wikispooks.   Original page source here
Retrieved from "https://wikispooks.com/w/index.php?title=Rishi_Sunak&oldid=254323"
Categories: