The Spectator is a weekly British magazine on politics, culture, and current affairs.[1] It was first published in July 1828, thus making it the oldest weekly magazine in the world.[2]

It is owned by David and Frederick Barclay, who also own The Daily Telegraph newspaper, via Press Holdings. Its principal subject areas are politics and culture. Its editorial outlook is generally supportive of the Conservative Party. 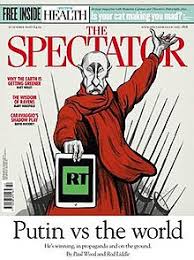 The Spectator is politically conservative and supports the Conservative Party. In the past it had liberal leanings: over the course of its first century it supported the Radical wing of the Whigs, the Liberal Party, and the Liberal Unionists, who eventually merged with the Conservatives. As with its sister publication The Daily Telegraph, The Spectator is generally Atlanticist and Eurosceptic in outlook,[3] favouring close ties with the United States rather than with the European Union, and tends to be supportive of Israel.[4] It also strongly opposes Scottish independence.

A Document by The Spectator

Documents sourced from The Spectator