Nadhim Zahawi is an Iraqi-born UK Deep state operative and politician who chaired Le Cercle from 2015 to 2017.[1] He has been the Member of Parliament (MP) for Stratford-on-Avon since the UK 2010 General Election. He has maintained contact with his native Kurdistan Region of Iraq throughout his career and currently chairs the All Party Parliamentary Group on Kurdistan.[2]

Since July 2019 Nadhim Zahawi was junior Minister for Industry, under Boris Johnson and, on 28 November 2020, Zahawi was given additional responsibility for Life Sciences overseeing COVID-19/Vaccine Deployment.[3]

In September 2021, he was made the new UK/Secretary of State for Education.[4] He became the new Chancellor of the Exchequer after the resignation of Rishi Sunak, pledging to increase military spending.[5] He launched his campaign to become the new prime minister but was eliminated in the first ballot alongside Jeremy Hunt.[6] He was demoted by Liz Truss, and given three new roles.

Nadhim Zahawi is of Kurdish origin and moved from Iraq to the UK in his childhood.[7]

Nadhim Zahawi read Chemical Engineering at University College London before proceeding to jobs such as European Marketing Director for Smith & Brooks Ltd, and co-founder and former CEO of YouGov the international market research firm which was listed on the London Stock Exchange's AIM market in 2005. 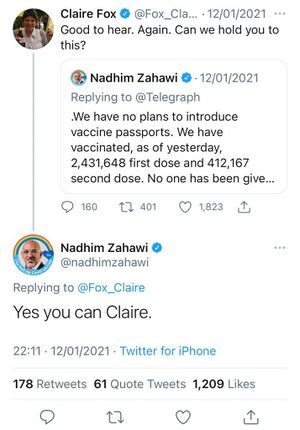 In early June 2020 Zahawi stated that a "Coronavirus" contact tracing app could be widely deployed in the UK by the end of the month.[10] In late November 2020, he was made UK's Minister for Covid Vaccine Deployment. Although documents revealed that in December 2020 the UK government was planning a "Covid passport", Zahawi explicitly denied this, and in February 2021 he was claiming that the government was “not looking at a vaccine passport for our domestic economy”.[11] In April 2021, he wrote that the UK "currently operates a system of informed consent for vaccinations".[12]

He "attended the now-infamous men-only charity dinner for some of the country’s wealthiest CEOs, with predictably less than savoury mid-course entertainment."[17]

This page imported content from Wikipedia on 16 October 2017.
Wikipedia is not affiliated with Wikispooks.   Original page source here
Retrieved from "https://wikispooks.com/w/index.php?title=Nadhim_Zahawi&oldid=251284"
Categories: