Document:Up to King Charles whether he wishes to attend COP27 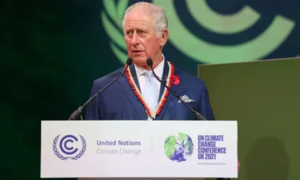 ★ Start a Discussion about this document
Up to King Charles whether he wishes to attend COP27, says Thérèse Coffey

King Charles is free to decide whether or not to attend the COP27 climate summit, the new Environment Secretary, Thérèse Coffey, has said as she defended the decision of the Prime Minister, Rishi Sunak, not to go.

Sunak, the third British prime minister in seven weeks, has come under scrutiny from opposition ministers and environmental groups, who called his decision not to attend COP27 a “failure” and said it brought into question government commitments to prioritise net zero and tackle the climate crisis.

Earlier this month, sources told The Guardian the king would not attend the international gathering in the Red Sea resort of Sharm el-Sheikh, after reports that the former Prime Minister, Liz Truss, had intervened.

“The government doesn’t have a view on whether the king should go or not, it’s a matter for the king,” Coffey told BBC Radio 4’s Today Programme on Thursday, adding she is not aware of the previous Prime Minister having advised King Charles. 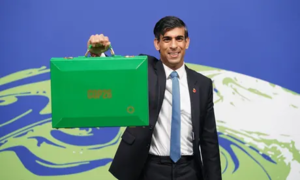 Rishi Sunak attended COP26 in Glasgow last year, when he was Chancellor of the Exchequer

Sunak’s decision not to go to Sharm el-Sheikh was heavily criticised by political opponents and green groups on Thursday as a “massive failure” of leadership.

“Britain showing up to work with world leaders is an opportunity to grasp. Not an event to shun,” said the Labour leader, Keir Starmer.

“The first test of leadership is to turn up. The new PM’s decision not to attend COP27 makes a mockery of any government claims on continued climate leadership – and what a shameful way to end the UK’s COP presidency.”

Rebecca Newsom, the head of politics at Greenpeace UK, said the move suggested Sunak did not take the climate emergency “seriously enough”.

“The UK government is supposed to hand over the COP presidency to their Egyptian counterparts at next month’s summit. For Rishi Sunak not to show up is like a runner failing to turn up with the baton at a crucial stage of the relay,” she said.[1]

On Thursday, the US Special Envoy on Climate Change, John Kerry, said it would be “terrific” for King Charles to attend alongside government representatives.

“I know that his being there would make a difference, because he has credibility, because he has been a long-term leader,” Kerry told Sky News, adding it would be “very powerful” and he could think of “nothing personally stronger” than to see the government and state presence at Sharm el-Sheikh.

Charles, who became king last month after the death of his mother, has long campaigned on environmental issues and addressed the COP26 summit in Glasgow last year. The Queen also recorded an opening address urging world leaders to action.

Referring to the Glasgow summit, Coffey told BBC Radio 4 “significant agreements were made” as the Royal Family attended, hosting various heads of state from around the world.

“In between these big moments every five years, they tend to be more detailed and focused on implementation, not quite the same level of attendance,” added Coffey, who was appointed Environment Secretary this week.

Sunak’s decision not to go owing to “other pressing domestic commitments” comes amid reports that other world leaders, including the US president, Joe Biden, who attended last year’s summit alongside Boris Johnson, will be there. The government’s autumn budget, one of Sunak’s top priorities, has been postponed to land during the COP27 summit on 17 November.

“We hosted a very significant COP last year in Glasgow, lots of progress was made.”

Coffey’s remarks come only a day after the UN environment agency said countries’ pledges to cut carbon emissions had been “woefully inadequate” and there was “no credible pathway to 1.5°C in place”.[2]

On Thursday, a parliamentary report revealed an “extreme weakness” in the UK’s national security because of the government’s failure to prepare critical infrastructure for extreme weather events caused by the climate crisis.

Urging that action be taken urgently, the report by the Joint Committee on the National Security Strategy, made up of senior MPs and peers, said:

“This summer’s heatwave also showed that even unimaginable scenarios can fast become a reality, and the government must prepare for the worst.”

On Thursday, Graham Stuart was reappointed as Climate Minister, but stripped of a place in the cabinet. Alok Sharma, who was the full-time president for COP26, will also no longer be at the table in the same role, but is expected to attend the summit in Egypt alongside Coffey and other senior ministers.

On 28 October 2022, in the afternoon, The Guardian reported:

King Charles will not attend the COP27 summit, Downing Street has said, as it is not the “right occasion” for him to do so.

The former Prime Minister Liz Truss had asked the king not to attend the summit, and her successor, Rishi Sunak, has left it in place, No 10 confirmed today.

The new monarch is famously passionate about the climate emergency, but according to Downing Street, it was “unanimously agreed” by Buckingham Palace and the government that the king would not attend.

Downing Street said Sunak and the king’s absence did not mean environmental issues had slipped down the agenda as three cabinet ministers – the Foreign, Business and Environment Secretaries – would attend the summit.

But hours before this announcement, the Environment Secretary, Thérèse Coffey, described the summit as just “a gathering of people in Egypt”.

Asked why the Prime Minister was not going to the COP27 summit, she told LBC:

"The politically big significant things happen every five years … while at the same time, of course, the UK continues to show global leadership, as opposed to just a gathering of people in Egypt."

She had earlier said that it was up to Charles to decide whether or not to attend the summit.

The Prime Minister has faced criticism for deciding to snub the summit because of other “pressing domestic commitments”.[3]