Extinction Rebellion (XR) is a UK-based resistance movement that promotes direct action to try to prevent climate change and damage to the environment. Although it is explicitly non-violent, the UK police have termed it an "extremist" ideology and have tackled it under the Prevent (Preventing Violent Extremism) programme.[1]

It gets plenty of coverage from the corporate press, like the BBC and the Guardian, having led to accusations of XR being a controlled opposition or a front group trying to introduce what the ruling classes have already determined to be the best course of action for preserving their dominance and control.

On 4 September 2021, XR concluded its "Impossible Rebellion" after two weeks of actions, marches—and over 500 arrests. Up to a thousand people joined a March for Nature in central London and groups affiliated to XR including, Animal Rebellion, Ocean Rebellion and XR Doctors all joined the protest.

Activists carried signs with slogans such as “Can’t buy your way out of extinction” and “Stop the war on nature”. The protest assembled in Trafalgar Square and marched to Hyde Park for a closing ceremony. XR's "Impossible Rebellion" has successfully highlighted key climate issues. And there are intense debates about how to win system change and confront capitalism.

Socialists have to be part of this movement. They must argue for mobilisations around the global climate strike on 24 September 2021 and action focused on Glasgow's COP 26 international climate conference in November.[2] 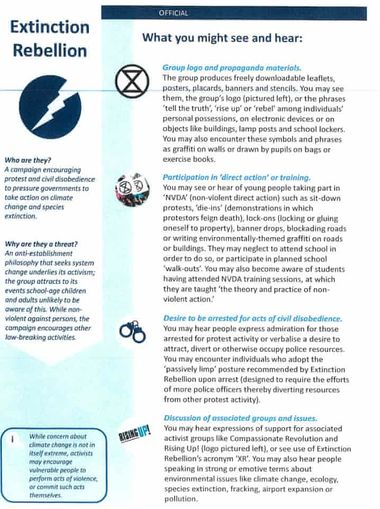 A document published by the Guardian in 2020 shows that although acknowledging the movement as non-violent, the UK police have listed Extinction Rebellion as as "extremist" group under the PREVENT (Preventing Violent Extremism) programme. When asked about the document, Counter Terrorism Policing South East stated that "this document was produced at a local level to help our partners to spot the signs of vulnerability to radicalisation. By including Extinction Rebellion in this document, it gives the impression we consider them to be an extremist group, which they are not. We will review the guidance to make this clear."[3]

The UK group has inspired similar ones worldwide, including in Australia[4] and Denmark.[5]

Gail Bradbrook, one of the co-founders, has spent the most of her career on the pay-roll of charities, NGOs and political ‘think-tanks’ (like the Blairite/New Labour IPPR)– to give ‘independent advice’ to government and help develop government strategies, policies and to define their objectives. Bradbrook joined the corporate funded Citizen Online in 2003 as “Director of Strategy & Partnerships”.[6]

In a longer analysis of XR, News from Nowhere wrote:

There’s nothing whatsoever spontaneous or grass-roots about the ‘climate mobilisation’ that’s currently being promoted all over the mass media. Mirroring what happened with the ‘colour revolutions’, idealistic youth are simply being herded into pre-approved movements, to create the illusion of a popular mandate for what the ruling classes have already determined to be the best course of action for preserving their dominance and control: carbon taxation, ‘smart’ cities, the 5G/ internet of things surveillance grid, AI, depopulation, and new investment opportunities in what’s being called the ‘Fourth Industrial Revolution’ (‘renewable technologies’, dependent on very limited rare earth minerals and heavily polluting mining operations, combined with health-damaging microwave technologies), as well as ‘carbon capture’/trading scams.[7]

Wikipedia promotes XR. [[1]], which is a song about climate alarmism was a featured article on Wikipedia's main page on 24 July 2021.

Astroturfing the way for the Fourth Industrial Revolution