The origins of COVID-19 remain uncertain. It was first publicly identified in December 2019 after an outbreak in Wuhan, a city which houses China's only BSL4 facility. The official narrative put out in early 2020 was that the virus emerged spontaneously by zoonotic transmission. In April 2020, an official opposition narrative was promoted by Western commercially-controlled media that implicated the Wuhan Institute of Virology.[1] In July 2020, Jonathan Latham and Allison Wilson suggested that the virus may have evolved from samples sent to the WIV from 6 miners infected by a new coronavirus in 2012.[2] 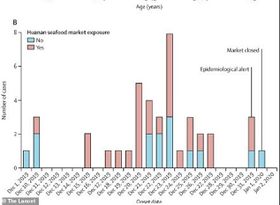 The official narrative about the origins of the virus, which Ronnie Cummins termed the "lone bat" theory was that it occurred naturally by zoonosis.[3] It was linked this to a seafood market, although a Lancet paper reported that three out of the first four patients had no known connection to it.[4]

Through March 2020 the generally implicit assumption of Western commercially-controlled media was that the virus originated naturally in Wuhan.[5] Alternative suggestions were pretty consistently referred to as "conspiracy theories"[6][7][8][9][10] and Twitter censored Zero Hedge for challenging it.[11]

The BBC claimed in October 2020 that "the vast majority of scientists agree that it crossed into humans from an animal species, most likely a bat."[12]

On 3 February 2020 Nature published A pneumonia outbreak associated with a new coronavirus of probable bat origin, which stated that "2019-nCoV is 96% identical at the whole-genome level to a bat coronavirus". The corresponding author was Zheng-Li Shi, who co-conceived the study. Her 28 co-authors, all Chinese, were mostly from the Wuhan Institute of Virology.[13] 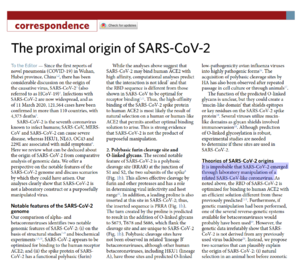 In March 2020 Nature published a paper entitled The proximal origin of SARS-CoV-2 which concluded that "we do not believe that any type of laboratory-based scenario is plausible" and that "SARS-CoV-2 originated via natural selection".[14]

ZeroHedge carried a response[15] by 'Harvard2TheBigHouse' that criticised it as discounting the possibility of unnatural selection, i.e. not gene editing but gain-of-function research by passaging through ferrets.[16]

"The findings presented in this study serve as the first example of host switching achievable for G2b CoVs under laboratory conditions by the exchange of a relatively small sequence segment among these previously unknown CoVs." [17] In plain English: virologists messing with a human-SARS-CoV (2002) and a bat-SL(SARS-Like)-CoV succeded in artificially making the bat virus infectious for humans - by inserting a small piece of the genome from SARS-CoV into the (bat) SL-CoV.

That is not to say that the Chinese are the only ones who can do that. The paper from 2007 explains the process so openly and detailed, as to enable other labs to reproduce and test their efforts. 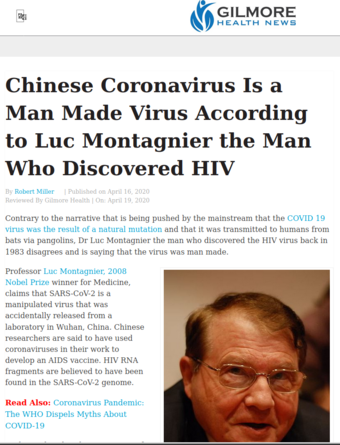 On 24 January 2020, the Washington Times published Coronavirus may have originated in a lab linked to China’s biowarfare program, citing Danny Shoham, a former lieutenant colonel in an Israeli military intelligence unit.[18] This idea was labelled a "conspiracy theory" by commercially-controlled media until early April 2020.

In April 2020, the official narrative changed from chance zoonotic emergence in November or December 2019 to conscious production in the Wuhan Institute for Virology at an earlier date, which appeared to be rolled back after a few days, with little further mention by corporate media.

"Evidence" emerged that suggested the virus may in fact have a connection to the WIV.[19]A report in Fox News in April 2020 claimed that "There is increasing confidence that COVID-19 likely originated in a Wuhan laboratory, though not as a bioweapon".[20]

"Evidence" cited included the claim that "China’s rate of occupational accidents is about ten-times higher than America’s, and some twenty-times more than Europe’s – the only other regions with high-level virology labs."[21] In January 2018, "the U.S. Embassy in Beijing took the unusual step of repeatedly sending U.S. science diplomats to the Wuhan Institute of Virology (WIV)", warning of inadequate safety procedures.[22]

Luc Montagnier, 2008 Nobel Prize winner for Medicine, who discovered HIV in 1983 said that he did not believe that SARS-CoV-2 (the virus not the disease) had occurred naturally.[23]

In 2012, 6 CHinese miners were infected by a hitherto unknown coronavirus in Yunnan province, China. This was dubbed RaTG13 by the lab of Zheng-li Shi at the Wuhan Institute of Virology. In July 2020, Jonathan Latham and Allison Wilson suggested that the virus may have evolved from their samples, and that its high efficacy at infecting humans may have evolved from the months of natural selection in the lungs of the miners, 3 of whom died.[24]

A story in the Daily Mail in April 2020 cited research suggesting that the virus may have emerged as early as September 2019, not in Wuhan,[25] and have been circulating in Europe[26][27] before the official narrative said it was introduced from China.[28]

In May 2020, reports suggested that the virus was in Europe by November 2019 and spreading slowly until it sped up in 2020[29] A French case from December 2019 was reported who had no known connection with Wuhan.[30] In May 2020, Anders Tegnell said he thought it was probably in Sweden by November or December 2019.[31] Genetic research was suggesting that it emerged towards the end of 2019 and spread worldwide, unnoticed, extremely fast.[32] 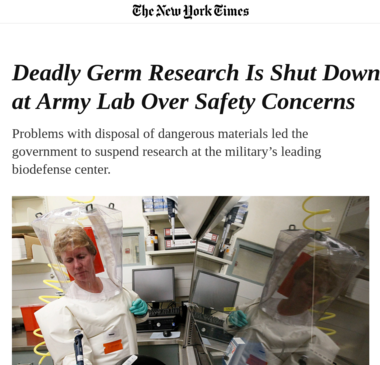 In January 2020 Zhong Nanshan challenged the assumption that the disease began in China and Chinese spokesman Lijian Zhao accused the US in a twitter post: "It might be US army who brought the epidemic to Wuhan. Be transparent! Make public your data! US owe us an explanation!"[33]

In July 2019 the CDC issued Fort Detrick (which the FBI concluded was the source of the anthrax used for the Amerithrax event) with a “cease and desist order” which shut it down for [How many?] months.[34]

In August 2019, an new illness was reported in the US which was named "vape lung" or EVALI (E-cigarette/Vaping -Associated Lung Injury).[35] "The EVALI and other respiratory viruses share similar symptoms, including shortness of breath, night sweats, low oxygen levels, and hazy spots on a lung X-ray, statnews.com reported, quoting experts, who mentioned the difficulty to "tease apart a bad flu case and a vaping case.""[36][37] 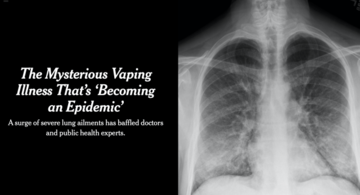 “Patients, mostly otherwise healthy and in their late teens and 20s, are showing up with severe shortness of breath, often after suffering for several days with vomiting, fever and fatigue. Some have wound up in the intensive care unit or on a ventilator for weeks. Treatment has been complicated by patients’ lack of knowledge — and sometimes outright denial — about the actual substances they might have used or inhaled.”
' [41]

It "sharply increasing in August 2019 and peaking in September". It was blamed on illicit vaping products, especially those containing cannabis. As of October 15, 2019, the CDC had reported on 1,358 sufferers of EVALI, of whom about 2/3 were male. The median age was 24 and although the median age of fatality was around 50 years.[42] 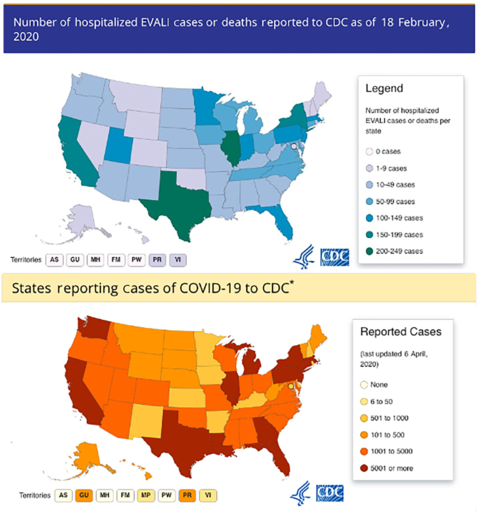 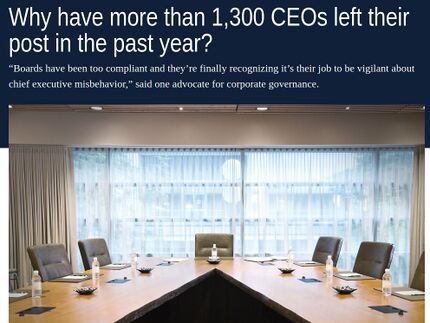 An NBC News story from 6 November 2019. It began: "Chief executives are leaving in record numbers this year, with more than 1,332 stepping aside in the period from January through the end of October, according to new data released on Wednesday. While it's not unusual to see CEOs fleeing in the middle of a recession, it is noteworthy to see such a rash of executive exits amid robust corporate earnings and record stock market highs."[43]

Forbes reported on 2 October 2019 on a report by Challenger, Gray & Christmas that CEOs Are Leaving At A Record Pace, Report Finds[44]

The 7th Military World Games was held in late October 2019 in Wuhan, China. Nearly 10,000 athletes took part from over 100 countries. In March 2020 China's foreign ministry spokesperson Lijian Zhao suggested that the “patient zero” of the COVID outbreak in Wuhan may have been a member of the US team. "The Chinese claim, something censored in the US, that the inattentive attitude and disproportionately below average results of American athletes in the game indicates they might have been in for other purposes and they might actually be bio-warfare operatives, and that their place of residence during their stay in Wuhan was also close to the Huanan Seafood Wholesale Market, where the first known cluster of cases occurred."[45]

Event 201, co-funded by Johns Hopkins Center for Health Security, the World Economic Forum and the Bill & Melinda Gates Foundation simulated a global coronavirus pandemic. The final presentation was held in front of an audience on 18 October 2019 and included participants who later played important roles in the COVID-19 Pandemic.[46]

According to an ABC News report of April 2020 that the National Center for Medical Intelligence (based in Fort Detrick) had warned the White House in November 2019 that "a contagion was sweeping through China’s Wuhan region, changing the patterns of life and business and posing a threat to the population, according to four sources briefed on the secret reporting."[47] The NCMI took the unusual step of denying it.

Italian researchers are looking at whether a higher than usual number of cases of severe pneumonia and flu in Lombardy in the last quarter of 2019 may be a signal that the new coronavirus might have spread beyond China earlier than previously thought was the headline of a March 2020 report by Reuters.[48]

The CDC explicitly prohibited epidemiologist Helen Chu from testing contacts of the first known case in Washington state. A paper in the New England Journal of Medicine dates the first US COVID-19 cases as a man who arrived there from Wuhan on 19 January 2020.[49]

In February 2020 research indicated that the US was the only location with all 5 different haplotypes, suggesting that it may have been the origin of the virus.[50] RT reported in April 2020 that "autopsies performed on two people who died at home on February 6 and February 17 show that their tissues were infected with Covid-19, Santa Clara health authorities said".[51]

On 13 March 2020, CDC Director, Robert Redfield testified to the US Congress that COVID-19 deaths had been miscategorised as the flu.[52] This inspired questions from China, which were not answered.

Various factors have been cited as suggestive that the event may have been a bioweapon, i.e. a false flag attack.[53][54] The track record of "escaped" viruses from western labs (~10 known incidents) shows that in all likelihood no pandemic can be caused by such accidents. [citation needed] Also, the flawless efficacy of the rollout of measures suggests a need for control of events other than chance.

Brian T. Kennedy, chair of the Committee on the Present Danger: China, has tweeted and re-tweeted[55][56][57] a large number of Tweets,[58][59] (some from corporate media with connections to the Committee), claiming the virus originates from a Chinese biological weapons program.

Francis Boyle stated in an interview for GreatGameIndia in February 2020 that he believed the virus is a bioweapon.[60][61][62] In a March 2020 update, Prof Boyle said he believes COVID-19 escaped from the Wuhan BSL-4 lab. He believes the virus is a biowarfare weapons agent genetically modified with gain of function properties, which is why the Chinese government originally tried to cover it up. The Wuhan facility is also a specially designated World Health Organization (WHO) research lab and Dr Boyle contends that the WHO knows full well what is occurring.[63]

The possible origins of 2019-nCoV coronavirus

On 6 February 2020 ResearchGate published a brief article by Botao Xiao and Lei Xiao from Guangzhou’s South China University of Technology. It noted that “In summary, somebody was entangled with the evolution of 2019-nCoV coronavirus. In addition to origins of natural recombination and intermediate host, the killer coronavirus probably originated from a laboratory in Wuhan. Safety level may need to be reinforced in high risk biohazardous laboratories. Regulations may be taken to relocate these laboratories far away from city center and other densely populated places.”[64] Botao Xiao told the Wall Street Journal in February that he had withdrawn the paper because it “was not supported by direct proofs.”[65]