The White Rose is a worldwide activist group which is known for posting stickers in public places against the COVID-19 deep event. The group is loosely structured around its Telegram channel https://t.me/JoinTheWhiteRose. The stickers can be ordered anonymously and are for free in most Western countries, or can be printed at home on a cheap label printer.

The White Rose is a decentralized global network of independent activists — each a powerful one person operation — all working in unison to disseminate a much needed counter narrative to the relentless onslaught of fear mongering, lies and propaganda we've all been subjected to since day one of the Covid-19 "pandemic".

In an age of rampant internet censorship, where all dissenting voices are silenced, and only Big Tech approved viewpoints are permitted a platform, we have taken the immense power of memetic warfare to the streets, via the medium of stickers!

The name is an homage to the WW2-era underground resistance group—active within Nazi Germany — who at great personal peril published and distributed a series of leaflets calling for active opposition to the Nazi regime. The courage, wisdom and ultimate sacrifice of Sophie and Hans Scholl, and all of their brave student allies, continues to inform and inspire us nearly 80 years later. 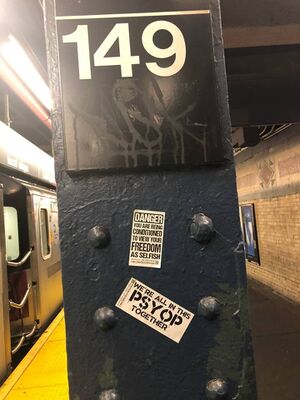 On a Manhattan subway

The White Rose is for: "Natural law, according to which all people—by virtue of being born—are endowed with inalienable 'natural rights', conferred not by act of legislation (as with 'legal rights') but by "God, nature, or reason"; Individual sovereignty/self-ownership - the natural right of every person to be the exclusive controller of one's own body and life; Bodily autonomy - the natural right of all human beings to self-determination over their own bodies; Freedom of movement; Freedom of assembly; Freedom of speech; The non-aggression principle, which asserts that no violence may be employed against a non-aggressor, in accordance with natural law; Non-violent civil disobedience; The Nuremberg Code."

The White Rose opposes: Mandatory or coerced vaccination, especially with experimental, gene altering mRNA technology, for which no long term safety data exists, and for which clinical trials are still ongoing; Mask mandates, which violate the principles of bodily autonomy and self ownership; Totalitarian lockdown restrictions, including (but not limited to): stay-at-home orders, forced business closures, forced quarantine of healthy people; Vaccine passports; PCR testing for diagnostic purposes; The Great Reset.

Corporate media has repeatedly attempted to connect it to "right wing extremism"[1], despite the White Rose explicitly stating it has no connection to any other group, and a clear mission statement which "do not condone, and moreover, we condemn racism of any kind" and is "inherently anti-authoritarian, condemning all forms of involuntary collectivism, including globalism, fascism, communism, National Socialism, Marxism, and all other doctrines that hold that any one group has the rightful authority to rule another, without the explicit consent of the governed." [2] A sleigh of hand is using ambiguous phrasing to deliberately create the impression that the stickers' comparison of COVID-measures to Nazi Germany is a support of the same. 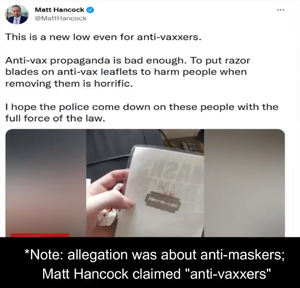 In July 2020 the BBC[3] published a story featuring a Cardiff woman who claimed she had been cut by a razor blade stuck on the back of an ‘anti-mask’ poster.

When UK-based journalist Iain Davis looked closer at the story he pointed out that what the BBC did not bother investigating was that the poster in question was laminated, thus stiff, and the razor blade stuck flat to the back of it, making it virtually impossible that the woman had actually cut herself. “When you took it off the wall, it would have been like a card, not a piece of paper you could scrunch up, it would have been a stiff card,” David said.

Nor did the BBC question why she threw away the ‘evidence’ instead of turning it over to the police she had contacted. They didn’t look into her apparent history of outlandish and improbable claims, like being disemboweled and walking to hospital holding her intestines in, nor her admitted history of self-harming, lending credence to the likelihood she staged the sliced-hand photo.[4]

While this story seemingly originated from an unstable individual, it was pushed unquestioningly by the BBC. Further, as Davis noted, the nonsensical razor poster story re-emerged two months later, this time with London transport warning of “anti-mask posters with razor blades.”[5]

Some irregularities include the fact that White Rose is non-violent, and that the obvious bad press would make the whole exersise poinless. Some people think that GCHQ are behind it.[6]