Jane Margaret Lakes Harman is a former member of the U.S. House of Representatives, serving from 1993 to 1999, and from 2001 to 2011; when she resigned after an NSA wiretap caught her coordinating with an Israeli agent.

Harman was the ranking Democrat on the House Intelligence Committee and the Homeland Security Committee's intelligence subcommittee. When Democrats held the House majority, she was in line to chair the House intelligence committee but was denied the post by then-Speaker Pelosi.[1] Resigning from Congress in February 2011, Harman became President and CEO of the Woodrow Wilson International Center for Scholars.[2]

Harman has been under FBI and Justice Department investigations after an NSA wiretap caught her coordinating with an Israeli agent so she could intervene in the AIPAC espionage case to reduce charges against Steve J. Rosen and Keith Weissman, the two officials indicted for spying. In exchange, according to Time, AIPAC would lobby then-House Minority Leader Nancy Pelosi to appoint Harman as chair of the House Intelligence Committee if the Democrats captured the House after the 2006 elections.[3] The New York Times later reported on the arrangement:

In return, the caller promised her that a wealthy California donor — the media mogul Haim Saban — would threaten to withhold campaign contributions to Representative Nancy Pelosi, the California Democrat who was expected to become House speaker after the 2006 election, if she did not select Ms. Harman for the intelligence post.[4]

In April 2009, CQ Politics, also confirmed the report. Harman ended the phone call, according to CQ, by saying, "This conversation doesn’t exist." According to CQ, then-Attorney General Alberto Gonzales pressed CIA Director Porter Goss to drop the agency's investigation of Harman, because he wanted Harman's support during the NSA warrantless surveillance controversy, about to break in the New York Times. Harman called the New York Times and urged them not to publish details on the program.[5][6] 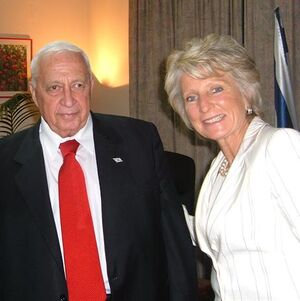 Shortly after the AIPAC scandal, Harman appeared with James Woolsey at AIPAC's 2009 annual conference in a panel discussion moderated by Dan Senor. Besides pushing for military action against Iran, Harman also recommended the ethnic fragmentation of the country:

The Persian population in Iran is not a majority, it is a plurality. There are many different, diverse, and disagreeing populations inside Iran and an obvious strategy, which I believe is a good strategy, is to separate those populations.

After graduating from law school, Harman - then known as Jane Lakes - married future NOAA administrator Richard A. Frank in 1969, and they had two children. They spent a short time in Switzerland and then she worked for two years as an associate with the law firm Surrey, Karasik and Morse in Washington, DC. She began her political career by serving on the staff of Senator John V. Tunney, and as his staff director from 1972-73. In 1973, Tunney named her his chief counsel and staff director for the Senate Judiciary Subcommittee on Constitutional Rights. During this time she also taught at Georgetown. When Tunney lost re-election in 1976, Harman - then known as Jane Lakes Frank - joined the Carter White House where she served as special counsel to the Department of Defense, and as Deputy Secretary of the Cabinet. She made headlines in 1978, when she quit to spend more time with her children. She and her husband, Richard Frank divorced the same year.[8][9] Two years later, she married Sidney Harman, who she had met in the White House when he was her first husband's boss.[10][11] Through the 1980s, Jane Harman worked as a corporate lawyer and as a director of her husband's company, Harman International Industries.[9]

Harman was first elected to Congress in 1992. From 1993 to 1999, Harman represented the California's 36th congressional district. In 1994, she barely survived reelection in a heavily Republican year. Harman did not run for the Congress in 1998, instead entering the 1998 California gubernatorial race.[12]

After losing the Democratic nomination to Lieutenant Governor Gray Davis, she briefly taught public policy and international relations at UCLA as a Regents' Professor before running for the House of Representatives, winning her old congressional seat in the 2000 election.

She served on all the major security committees: six years on Armed Services, eight years on Intelligence, and eight on Homeland Security. She made numerous congressional fact-finding missions to hotspots around the world, including North Korea, Syria, Libya, Afghanistan, Pakistan, Yemen, and Guantanamo Bay. During her long public career, Harman has been recognized as a national expert at the nexus of security and public policy issues. She received the Defense Department Medal for Distinguished Service in 1998, the CIA Agency Seal Medal in 2007, and the CIA Director's Award and the Director of National Intelligence Distinguished Public Service Medal in 2011.

She was one of many Democrats who supported the Iraq War.[13]

Harman was a co-sponsor of the Armenian Genocide recognition resolution bill in 2007. However, while still cosponsoring the bill, she wrote a letter to House Foreign Affairs Committee Chair Tom Lantos urging him to delay a floor vote on the legislation.[14] Her argument was that while the genocide deserved recognition, it was not a good time to embarrass Turkey, "given that country's role in moderating extremism in the Middle East."[15]

Harman is currently a member of the Defense Policy Board, the State Department Foreign Affairs Policy Board, the Director of National Intelligence’s Senior Advisory Group, and the Homeland Security Advisory Council. She was a member of the CIA External Advisory Board from 2011 to 2013. Harman is a Trustee of the Aspen Institute and the University of Southern California. She also serves on the Board of Directors of the Committee for a Responsible Federal Budget. She is also a member of the ReFormers Caucus of Issue One.[16]

Harman's first marriage was to Richard Frank, in 1969, with whom she had two children.[17] Her second marriage was to audio pioneer and multi-millionaire Sidney Harman, who served from 1977 to 1979 as the Undersecretary of the Department of Commerce in the Carter administration before repurchasing the company he founded, Harman International Industries, and later taking it public.[18] She also had two children with him.[17] She has four grandchildren.

Asked in 2010 about a possible conflict of interest, Sidney Harman said: "We’ve been married for over 30 years. I’ve never told her how to run the government and she’s never told me how to run the business (Harman International). That’s absolutely fundamental to us."[19] He retired in 2008 from Harman Industries, purchased Newsweek Magazine in 2010, and founded the Academy for Polymathic Study at USC before he died in April 2011.[18] Harman maintains a residence in Venice Beach, California.