Robert James "Jim" Woolsey Jr, a former director of the U.S. Central Intelligence Agency, and still (per 2020) very active in deep state networks. He participated in the uncannily correct 2001 Dark Winter bioterrorist exercise. Since his CIA job, he has been counsel for major corporations, in both commercial arbitrations and the negotiation of joint ventures and other agreements, including as Vice President at Booz Allen & Hamilton for Global Strategic Security[1], and is active in deep state networks like the Henry Jackson Society.

In March 2020, he became honorary co-chairman of the Secure the Grid Coalition, "where our nation’s existence depends" on the commission's ability "address the incredible vulnerabilities of the U.S. electric grid to all hazards,"[2] He is not the only deep state actor with an interest in this subject. Some analysts have put the renewed attention in the subject in conncection with the preparation for a possible false flag incident[3] involving an Electromagnetic Pulse or a cyberattack, destroying the electricity supply for extended periods.

Woolsey was a Rhodes Scholar from 1963-1965, a graduate of Stanford University and a 1968 graduate of Yale Law School. During his military service in the U.S. Army, he served as an adviser on the U.S. Delegation to the Strategic Arms Limitation Talks (SALT I), Helsinki and Vienna, from 1969 to 1970. [4]

Woolsey has held important positions in both Democratic and Republican administrations. His influence has been felt during the administrations of Jimmy Carter, Ronald Reagan, George H. W. Bush, and Bill Clinton, and his deep state activities continued afterwards too.

Woolsey started his career in the law firm Shea & Gardner.

He was also appointed by President Reagan as Delegate at Large to the U.S.-Soviet Strategic Arms Reduction Talks (START) and Nuclear and Space Arms Talks (NST) in Geneva between 1983 and 1986. He was also a member of the Policy Advisory Board to the Secretary of Defense.

Woolsey was Director of Central Intelligence under President Bill Clinton, 1993-95. After a brief and unhappy tenure, he went back to Shea & Gardner, which represents a number of major corporate clients, including defense contractors Boeing and Lockheed Martin. . In 2003, the firm was registered as a foreign agent performing lobbying and legal services for the Iraqi National Congress.[6]

During Clinton’s second term, Woolsey served on the Rumsfeld-chaired Commission to Assess the Ballistic Missile Threat, whose final 1998 report issued the alarmist conclusion that several “rogue” countries would be able to target the United States with ballistic missiles in a few short years.[9]

Woolsey became a prominent media presence after 9/11, criticizing opponents of the Bush administration’s “war on terror” and characterizing the conflict in stark, existential terms.

Woolsey was an outspoken proponent of invading Iraq even before 9/11. Following 9/11, Woolsey was part of a circle of national security hawks that aggressively promoted a theory that basically held that Saddam Hussein was behind it, and immediately began to push for military action against Iraq —a policy he had supported long before 9/11. Paul Wolfowitz sent Woolsey to the UK to press the British government for supposed evidence showing that Saddam was the mastermind of 9/11. Woolsey also pushed the theory—advanced by Dick Cheney that Mohamed Atta, the alleged lead 9/11 hijacker, had met with an Iraqi intelligence officer in Prague months before 9/11. (This was not true either.) And Woolsey championed an Iraqi defector who claimed to have information on WMDs in Iraq, though this defector had been judged a fabricator by US intelligence.

Woolsey has contiuned being a prominent talking head in security matters in corporate media.

He is involved in several hawkish pro-Israeli efforts, especially against Iran. Woolsey championed President Obama’s decision to broaden U.S. involvement in rolling back the (CIA created) Islamic State in Iraq and Syria (ISIS). After the November 2015 terrorist attacks in Paris, Woolsey called for a “coalition with us and France and NATO” to “go after them.” [12]

He has been a stern critic of negotiations with Iran. Regarding the interim nuclear deal signed between Iran and world powers in November 2013, Woolsey said, “We are basically caving in.” “Now it’s going to be hard to move it where we should move it if we want to cause major disruption in the Iranian government, and I think we should want to do that.”[13] 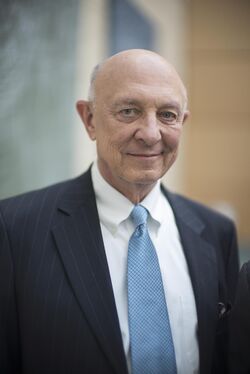 Woolsey derided the July 2015 nuclear deal between Iran and the P5+1 world powers as “worse than worthless.”[14]

On the Wednesday prior to the US airstrike that assassinated Iranian general Quassem Soleimani, Woolsey appeared on the conservative Newsmax TV and said, “We ought to target all of the facilities of the Revolutionary Guard.”<refhttps://www.motherjones.com/politics/2020/01/with-a-war-against-iran-brewing-dont-listen-to-the-hawks-who-lied-us-into-iraq/</ref>>

He also promotes a hard line on North Korea, invoking in May 2013 the generally discredited threat that North Korea could launch a nuclear device in the stratosphere to trigger an electromagnetic pulse (EMP) that would cripple U.S. infrastructure. “An EMP attack,” Woolsey claimed, “would collapse the electric grid and other infrastructure that depends on it—communications, transportation, banking and finance, food and water—necessary to sustain modern civilization and the lives of 300 million Americans.” [15]

In March 2020, he became honorary co-chairman of the Secure the Grid Coalition, "where our nation’s existence depends" on the commission's ability "address the incredible vulnerabilities of the U.S. electric grid to all hazards,"[16] He is not the only deep state actor with an interest in this subject. Some analysts have put the renewed attention in the subject in conncection with the preparation for a possible false flag incident[17] involving an Electromagnetic Pulse or a cyberattack, destroying the electricity supply for extended periods.

Woolsey declared that the NSA leaker Edward Snowden “should be prosecuted for treason [and] hanged by his neck until he is dead.”[18]

Woolsey has had lucrative board of directors positions in a number of defense companies, generally in fields related to technology and security, including Martin Marietta; British Aerospace; Fairchild Industries; and Yurie Systems.

He is a member of the Gatestone Institute.

Woolsey is connected with the Scowcroft Commission (also see Brent Scowcroft) and the Rumsfeld Commission (also see Donald H. Rumsfeld). He is currently chairman of Freedom House, affiliated to the National Endowment for Democracy, is on the board of the Jewish Institute for National Security Affairs (JINSA), a member of the Committee for the Liberation of Iraq, on the board of the Washington Institute for Near East Policy, a senior advisor for Americans for Victory Over Terrorism (AVOT), and a principal in Paladin Capital Group.[20] He is Vice President of Booz Allen & Hamilton, the lead contractor for the Total Information Awareness programme.

Speaking to a group of college students on 2 April, 2003, former CIA Director Woolsey revealed, "...the United States is engaged in World War IV, and that it could continue for years." Woolsey described the Cold War as the third world war. He then said "This fourth world war, I think, will last considerably longer than either World Wars I or II did for us. Hopefully not the full four-plus decades of the Cold War."[21]

When James Woolsey, the former CIA director and current Pentagon adviser, appeared on "Nightline" five days after 9/11 and suggested that America had to strike Iraq for sponsoring "terrorism", Ted Koppel rebutted: "Nobody right now is suggesting that Iraq had anything to do with this. In fact, quite the contrary."

'only fear will re-establish Arab respect for us'.

He worked on the Advisory Board of the Endowment for Middle East Truth.