Deep state milieux are informal, clandestine gatherings to meet and arrange business. These organs of the deep state are created and governed by deep politicians. Like criminal syndicates, some are ephemeral, some perennial. They have varying procedures and protocols, but are generally characterised by the secrecy required by agents of the deep state.

Deep state milieux are environments where deep politicians can meet and conduct deep political business. They vary in terms of secrecy from the relatively public (such as the CFR) to more secretive groups such as Le Cercle or the Club de Berne. Some have formal meetings and minutes (such as the Bilderberg), others are careful to commit as little as possible to paper - making them hard to track. The examples listed below are almost all international in nature.

“one of the tendencies of such groups is for their members to "play musical chairs", changing place frequently on the raft of names sponsoring an organization... [so] sharing a Board membership with someone does not necessarily imply intimate knowledge of the other's various activities.”
David Teacher [1] 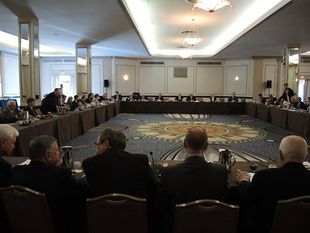 Deep state milieux reflect the patriarchal Western societies from which they usually arise - they are typically full of older Caucasian men. The first Bilderberg, for example, was exclusively male. While no longer 100% male, a photo from the 2016 Cercle meeting in Washington shows a large majority of men.

In order to secure continuity of the institutions, some younger men are admitted, either on a trial basis or occasionally more permanently. Similarly, skin tone is predominantly pale rather than dark, although nowadays this may be less a reflection of institutionalised racism as much as on low social mobility and the ancestral basis of admission to such groups. Kwasi Kwarteng, for example, believed to have been chairman of Le Cercle from 2017-2018, is of African descent although his educational background is more standard for a deep state operative: Eton College, University of Cambridge, Harvard University. 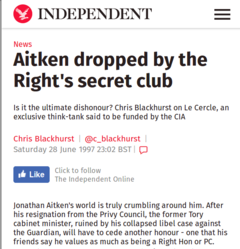 A very rare mention of Le Cercle by corporate media.

As of 2019, most deep state milieux are third rail topic‎s which commercially-controlled media has next to nothing to say about. Where the group does have a public-facing narrative, corporate media reliably promotes this. Occasional stories do get published however which are a source of information about these groups. One such was a 1997 article by The Independent which mentioned about Jonathan Aitken's dismissal as Chairman of Le Cercle.[2]

One exception is the Bilderberg, which was the subject of intense efforts at exposure by independent online activists. It now publishes a guest list just before each meeting and is mentioned reliably in commercially-controlled media, albeit uncritically.

An illustrative 2011 piece from the BBC was entitled Bilderberg mystery: Why do people believe in cabals?. It quoted David Aaronovitch (later exposed as a member of the UK deep state's Integrity Initiative) as stating that the Bilderberg is "really an occasional supper club for the rich and powerful".[3]