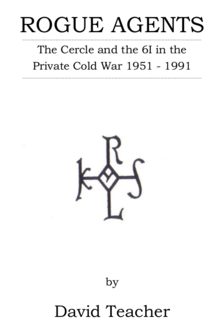 Rogue Agents is a book by David Teacher. Based on a considerable cache of original documents, it is an in-depth scholarly analysis of the objectives, activities and membership of Le Cercle and related secret organisations focused on post-war Europe during the Cold war period from the early 1950's to 1991. Originally intended for publication in the early 1990's but postponed for a mix of reasons connected with the sensitivity of its contents, it has undergone 4 major revisions in response to new documents becoming available. It was first made available publicly following the author's contact with Joël van der Reijden of ISGP in 2010.

Revisions 3, 4 and 5 are available on Wikispooks. If you are new to the book, you are recommended to download the latest (edition 5) and 3 (for its appendix of source documents).

A document sourced from Rogue Agents