The Bohemian Grove is a 2,700-acre virgin redwood grove in Northern California, 75 miles north of San Francisco, which is a deep state milieu. [1]

Nothing to see here, move along. A spokesperson for Bohemian Grove stated the people that gather there “share a passion for the outdoors, music, and theater.”[2]

To join the Bohemian Club one must either be invited by several members or wait for decades. A $25,000 initiation fee and the costly yearly dues.[3]

A quasi occult ritual[4] is played out every year:

“A second and third priest then recall to memory deceased friends who loved the Bohemian Grove, and the high priest makes yet another effusive speech, the gist of it being that "Great Nature" is a "refuge for the weary heart" and a "balm for breasts that have been bruised." A brief song is sung by the chorus and suddenly the high priest proclaims: "Our funeral pyre awaits the corpse of Care!" A horn is sounded at the boat landing. Anon, the Ferry of Care, with its beautifully ornamented frontispiece, begins its brief passage to the foot of the shrine. Its trip is accompanied by the music of a barcarole—a barcarole being the song of Venetian gondoliers as they pole you through the canals of Venice. As one listens to the barcarole, it becomes even clearer that many little extra touches have been added by the Bohemians who have lovingly developed this ritual over its ninety four-year history. The bier arrives at the steps of the altar. The high priest inveighs against Dull Care, the archenemy of Beauty. He shouts, "Bring fire," and the torchbearers (eighteen strong) enter. Then the acolytes quickly seize the coffin, lift it high above their heads, and carry it triumphantly to the pyre in front of the mighty Owl. It seems that Care is about to be consumed by flames.”
The Bohemian Grove and Other Retreats [5]

In 2011, the Washington Post headlined an article "Where the rich and powerful go to misbehave".[2]

Short newspaper item about the B. Grove 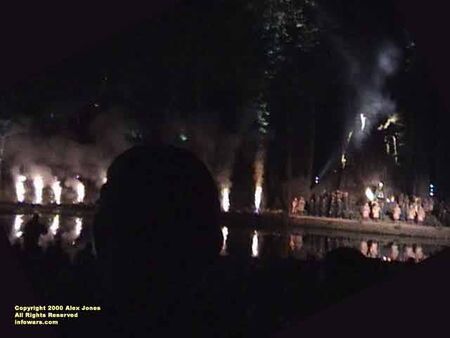 Picture from Alex Jones recording the Cremation of care ceremony in secret. [6]

Paul Bonacci reports that he was flown to the Bohemian Grove in 1982.