John Taylor Gatto has stated that the concept of 'adolescence' was invented in 1902, as a method of prolonging childish dependence though schools.[1] 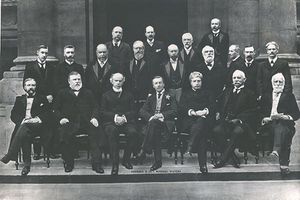 The The_Pilgrims_Society was start as an dining club. It continues to this day and has became particularly important as a meeting place of bankers, diplomats and politicians.