From Wikispooks
< Wikipedia
Jump to navigation Jump to search

Wikipedia is actively censored, and users are blocked not only for reasons of spam and vandalism. Their carefully formulated policies, especially those on "reliability" and "notability" are tools to extend Operation Mockingbird's control of corporate media to give de facto control of what appears on Wikipedia.

Wikipedia boldly and clearly declares "Wikipedia is not censored"[1], notwithstanding evidence that particular information is persistently removed.[2]

One Wikipedia editor stated "Wikipedia is a record of human knowledge, stored on a high school blackboard, and every kid has an eraser and a piece of chalk. Guess whose stuff stays on the blackboard?"[3] Wikipedia has an explicitly establishment friendly policy of assuming that commercially-controlled media is reliable, even though they are legally allowed to lie.[4] Moreover, events that the corporate media choose to ignore are not deemed 'notable', allowing those who can censor the commercially-controlled media to effectively censor Wikipedia. Certain lines of thought are reverted within minutes.

Bell Pottinger has a team which "sorts" negative Wikipedia coverage of clients.[5] Less obvious, but no less pernicious, is use of Wikipedia's "notability" criterion to remove entire pages, keeps certain important topics off the agenda and certain people or activities out of the limelight.

Like Google, English Wikipedia maintains a blacklist of sites (including this one), which must never be cited as sources. This domain blacklist simplifies the inclusion of the site within an Operation Mockingbird style system of broad spectrum censorship.

Ordinary Wikipedia users cannot see the content of deleted pages, only the date of their deletion. This is occasionally revealing in itself (Isaac Kappy's page was deleted 2 days after he died). However, the content of the page is visible only to administrators with the power to undelete it.

Page deletions are not standardised between languages, so if you detect that a page has been deleted, it is quite possibly still available in an alternative language. For example, the English Wikipedia page of José Sanjenís Perdomo was deleted on 6 September 2015, for example, but the Spanish language page was still available as of July 2019.

All wikipedia pages have histories, which record the earlier versions. These are accessible if you click on the View history tab. These histories can be censored[7] but as of 2014, this was believed to be a rare occurrence. 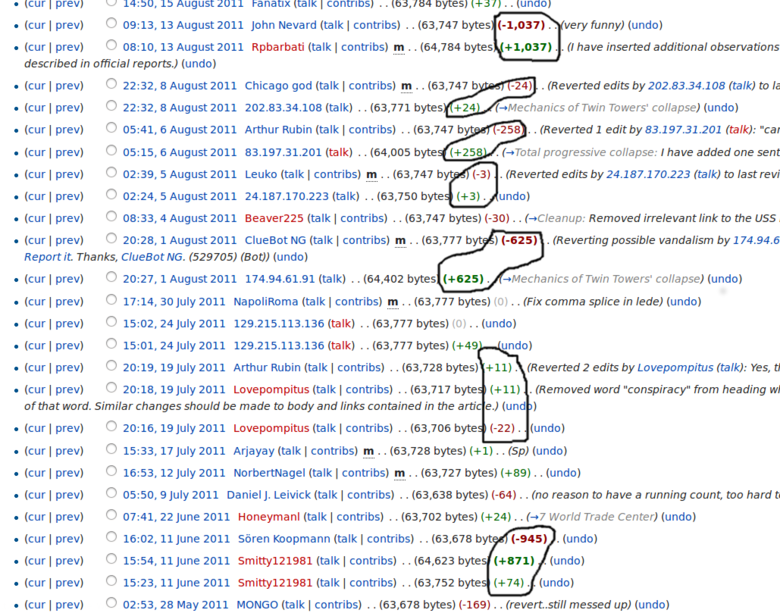 The page history of the Collapse_of_the_World_Trade_Center page shows a clear pattern of repeated, fast, reversion of edits, strongly indicative of censorship.

The history is gives a list of revisions to the page, including the time, date, editor name, article length, edit length, and (optional) edit summary. Certain wikipedia pages are regularly monitored to ensure particular viewpoints are excluded.

The edit reversions are marked. They are indicated by a green number with an red identical number just above. For example, see the fifth line down: on 22:32, an anonymous user (202.83.83.108) made an edit which increased the article length by 24 bytes, only for user Chicago god to remove 24 bytes the same minute.

To investigate the edits, click on the reversion (later edit, typically a red bytecount) and the edit below. Then click on "compare selected revisions" and wikipedia will show you the change(s) made. This may of course be vandalism or spam, but it may also be censhorship. While unwanted on Wikipedia, material which challenges the official narrative may be welcome on Wikispooks, especially if it is referenced. Another tip for investigation is to click on the contribs link next to the author, to see a list of all the edits they have made on Wikipedia. If some of their edits are being censored, this is a good indication that their other edit may be of interest.

The simplest strategy for censoring content is just to purge all trace of it. As of 2018, it is still unproven whether this is employed at all, as sufficient real time tools have not yet been developed to monitor Wikipedia.

Another policy use by Wikipedia (since December 1, 2012[8]) has been using a system of "page protection" which will prevent the above technique from working. Particularly sensitive pages may be assigned a "protection level", illustrated by the icon shown right, which prevents unregistered or new users from changing them - thus preventing their contribution being reflected in the page history, as it is likely to be rejected by an editor versed in the official narrative.

Suppressed edits in gray struck through font have been censored from the Wikipedia page about the suspicious death of Vince Foster.[9].

Since Summer 2006, Wikipedia has had a "Revision delete" (a.k.a. "suppression" or "oversight") facility which allows a small number of administrators (i.e. 52 as of February 2018, reduced to 41 as of August 2019) to make the content of edits inaccessible for ordinary users, editors and other administrators alike. The explanation of this, as of February 2018 was that the "Wikimedia Foundation may have to delete, protect, blank a page or take other actions without going through the normal site/community process(es) to do so. These changes may be temporary or permanent measures to prevent legal trouble or personal harm and should not be undone by any user."[10]

It was reportedly rarely deployed as of 2018. Since the dates of revisions are available, one way to try to get round it is to look at the internet archive, which might have a copy of the censored edits. Another sensible move is to pay particular attention to other edits made by the user(s) whose edits have been censored in this way.

Previously, going to a deleted page would not show the text, but would at least reveal a list of when the page had been created and deleted. In 2014, Wikipedia changed the behavior for pages which had been deleted, so now no confirmation is presented that the pages ever existed.