An E-4B is a highly modified Boeing 747 equipped with advanced communications equipment,[1][2] capable of carrying a crew of up to 112 people and intended as a flying military command post (National Airborne Operations Center - NAOC). Four planes of this type were built. One was flying in restricted airspace over the White House on the morning of 9/11; this was reported by CNN.[3][4] 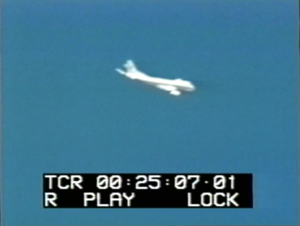 As of 2007, the US military had not admitted to knowing anything about the large plane circling over Washington on 9/11.[5] With declassification of documents that was reported about in 2014,[6] it is now clear that operators on that day knew it was an E4B:

DDO: Roger. Actually, any NAOC element. We're trying to confirm the type of aircraft that ADDJ:S77 is.
That's A-D-D-J:-577, which is inbound to Andrews Air Force Base.
HAOC: . That is the tertiary NAOC and they are trying to get into Andrews.
DDO: Roger. understand it' s an E4B?
NAOC: That Is E4B.
DDO: Roger. Understand, E4B.
NORAD: Roger. NORAD copies. And, that's the same airframe as a Boeing 747, correct?
RAOC: That is correct, sir.[7]

Several witnesses testified to seeing a large white plane fly over the White House. At 9:54 a.m., correspondent John King, standing near the White House, reported that about ten minutes earlier (i.e. ~9:44 a.m.), there was "a white jet circling overhead."[8] Dan Verton, a former intelligence officer in the U.S. Marine Corps and former senior writer for Computerworld magazine, wrote that "on the morning of September 11, an E-4B was launched from "an airfield outside of the nation's capital." (He did not, however, state which specific base.) This plane was carrying "civilian and military officials," and was going "to conduct a previously scheduled Defense Department exercise." This exercise would involve "the use and testing of the aircraft's various advanced technology and communications equipment."[9][10] 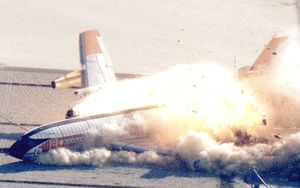 E-4Bs are highly modified Boeing 747s that act as flying military command posts. The plane was possibly, along with other E4B's, participating in Global Guardian.[9][11] Andreas von Bülow and others have suggested that the E4B above Washington may have been the command center for the 9/11 operation. In his book: "The CIA and September 11" he speculated that the one over Washington, along with the other available E4B's, have hijacked the electronics of the planes via Boeing Uninterruptible Autopilot[12] or other means and let these planes crash remotely like demonstrated with the "Controlled Impact Demonstration" in 1984.[13][14] 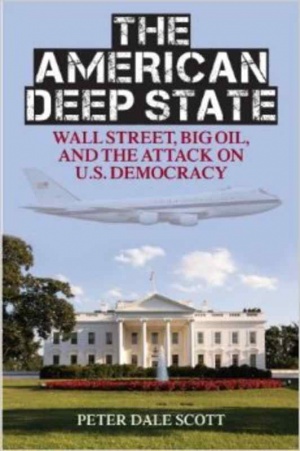 Cover of The American Deep State showing the E-4B

The first edition of Peter Dale Scott 2014 book The American Deep State features a ghostly looking E4B over the White House to draw attention to the E4B which flew in restricted airspace on September 11th, 2001, and symbolize the subordination of "democratic" government to the military industrial complex.