Document:Venezuela critics are just Blairites having a kick at Jeremy Corbyn

George Galloway delivered a blistering rant against "half-witted" commentators and Labour MPs criticising the Venezuelan government, saying they are simply Blairites trying to have a kick at Jeremy Corbyn.

Our host, in the opening monologue of "The Mother of All Talk Shows", said he was a "long-standing admirer" of Venezuela's political process and had been moved to "take a stand" after hearing Ken Livingstone's interview with Julia Hartley-Brewer last week.[1]

Livingstone told our listeners that Nicolás Maduro was a nice man, that Venezuela would have been more stable had Chavez killed the country's oligarchs upon taking power in 1998, and that he himself had offered the Venezuelan government economic advice - but been rejected.

The former Mayor of London has been widely criticised for these views, but Galloway suggested he had been the victim of a witch-hunt against Corbyn and other members of the hard-left who have supported Venezuela in the past.

"I keep hearing half-witted, uneducated pontificators who know nothing about the country, lecturing us on how Venezuela has taken such a wrong turn. When I heard the interview about it on this station, in this very studio room with Ken Livingstone, I realised we had to take a stand.

"What’s really going on here is not an attack on Maduro, who these pontificators had not heard of before last week, couldn’t identify his mug on a mugshot on a TV screen. This is another assault on Jeremy Corbyn.

"Labour MPs, many of them admirers of Tony Blair, many of them supporters of the Iraq War, many of whom abstained on a three-line whip to ask for an inquiry into the selling of deadly weapons to the putrid dictatorship of Saudi Arabia, are demanding that Corbyn denounce his erstwhile friends in Venezuela. It's enough to make you sick."

Galloway went on to suggest that, "if only Venezuela had hired one of Tony Blair's PR machine in London town, they might be in a better place as far as the British mainstream media is concerned:

"If only Venezuela, when it adopted its new constitution in the last couple of days, had chosen the Saudi Arabian constitution, all the Western countries would have loved it and would have been queuing up to sell it weapons. Prince Charles might have done a sword dance with President Maduro."

Turning to the cause of the current crisis, Galloway said it has been "fuelled by the United States, not in the last few weeks or months but since 1998:

"For nineteen years the United States government and its secret agents have been trying to overthrow the Venezuela political process. Why might that be? Well, there are many reasons but the biggest among them has the smallest name: OIL."

Following on from this, he claimed UK law had been turned into an "ass" by last week's High Court decision that Blair could not be punished over the Iraq War, as the allegations against him do not exist in British law:

"As the great Michael Mansfield QC argued in court, that can’t be true because we say we follow international law. Unless you think the Nuremburg Trials in 1945 were a kangaroo court dispensing lynch mob justice, unless you think we tried the beasts of Nazism and hanged a bunch of them in a kangaroo court with no legal validity, then you can’t possibly take the view that these two justices in the high court took this week.

"The Nuremburg charge sheet number one was the making of 'Aggressive War'. That was the number one indictment and Britain took the lead in the prosecution. To now claim Blair can’t even be brought to court to answer the charge laid bare in the Chilcot Report, that he and Bush had launched aggressive war against Iraq, a member state of the United Nations in defiance of the UN Charter we are required to uphold, then the law is frankly an ass."

Retrieved from "https://wikispooks.com/w/index.php?title=Document:Venezuela_critics_are_just_Blairites_having_a_kick_at_Jeremy_Corbyn&oldid=119706"
Categories:
... more about "Document:Venezuela critics are just Blairites having a kick at Jeremy Corbyn"
RDF feed
Constitutes
Interview +
Description
For nineteen years the United States government and its secret agents have been trying to overthrow the Venezuela political process. Why might that be? Well, there are many reasons but the biggest among them has the smallest name: OIL. +
Display docType
Interview +
Display image
File:George_Galloway.jpg +
Display image2 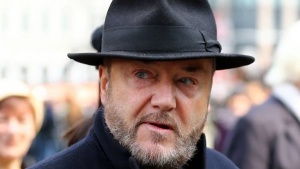