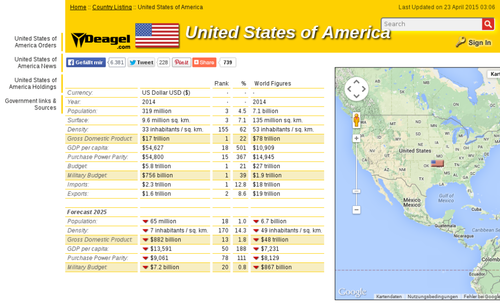 As of October 2021 it is still publishing articles about military technology;[3] the predictions about reduced populations have been removed.

On the occurrence of the Corona pandemic, Deagel updated their disclaimer.[4][5]

Archives indicate that the website started with no such forecasts in 2007.[6] Since 2012 the Deagel list has predictions about the year 2025, before that until 2020.

Deagel.com was mentioned once in the 2012 Wikileaks Stratfor leak, apparently as a resource for analysis in a Stratfor report. The mention is a 2010 Deagel article about a missile (thus technical information); possibly the only source the author could find at the time on that type of missile, not looking at other information on the website. Or it has been placed there deliberately by a company that has the strongest connections to the national security apparatus, to use this kind of circumstance in psychological warfare operations against it's populations.[11][12] (the later explanation would imply that the leak is not genuine, but intentional, or Stratfor was aware of access to their systems and placed some information intentionally).