Document:M23 and the unseen high-tech genocide

Keith Harmon-Snow is one of very few deeply knowledgeable and genuinely independent sources of information about what is really going on in the Great Lakes region of Central Africa. It is a region of major strategic mineral resource interest to the globalised economy. Conveniently for those orchestrating the vast criminal exploitation of both its resources and population, it is also one which the vast majority of Western people are both ignorant about and indifferent to. Indifferent that is until their outrage is needed to bolster support for some Western intervention or other when, as if by magic, another wicked terrorist organisation commits another terrorist outrage.

Western multinational corporations operating in eastern Congo have deep ties to the criminal extortion, money-laundering, racketeering and theft behind the plunder and depopulation in the Great Lakes countries. John Bredenkamp, Billy Rautenbach, Dan Gertler, Philippe De Moerloose, Elwyn Blattner... we know who the "untouchables" are, the white collar war criminals behind the high-tech genocide; but they are never, ever mentioned by the western media system, unless they have built some wattle-and-daub school, insulting the African people, but pleasing their affluent sponsors....

★ Start a Discussion about this document
More Congo Propaganda: M23 and the unseen high-tech genocide 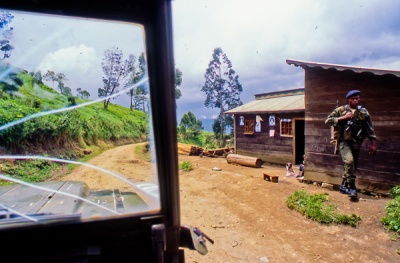 The village of Bihambwe on "Chicko Mountain" in the verdent hills of North Kivu, DRC. Photo: Keith Harmon Snow.

The western propaganda system is again trotting out the refrain that "rebels in Congo have been defeated." The latest so-called "rebels" — the M23 forces — are actually Rwandan government troops, not rebels. Reports appearing in the western mass media are that the "M23 rebels" have "surrendered in Uganda", or "turned themselves in" in Rwanda. This is nonsense.

Reports now appearing in the western Mainstream Media are that the "M23 rebels" have "surrendered in Uganda", or "turned themselves in" in Rwanda. This is nonsense, since these are Rwandan Defense Forces, most of them formerly National Congress for the Defense of the People (CNDP) "rebels", formerly Congolese Rally for Democracy "rebels", formerly of the Rwandan Patriotic Army/Movement (RPA/RPF), formerly Ugandan People's Defense Forces (UPDF), formerly National Resistance Army/Movement (NRA/M) troops. (This is especially true of commanders, e.g.: James Kabarebe, Laurent Nkundabatware, and many others). The varying incarnations of "rebels" in eastern Congo have all and always been backed by Museveni (Uganda) and Kagame (Rwanda), in turn backed by the USA, UK and Israel. M23 is the same: another predominantly Tutsi army serving the Tutsi/Hema elites — not the people of Uganda or the people of Rwanda/Burundi and the bain of innocent men, women and children wherever they go. 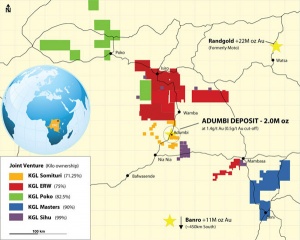 Meanwhile, in Kinshasa, Hippolyte Kanambe (alias Joseph Kabila) is showing his consistent treasonous betrayal of the people of Congo by calling for the M23 rebels to be included in the political process. How and why would the president of Congo be inviting "defeated" guerrillas who have committed war crimes, crimes against humanity and genocide in Congo (1996-2013), Rwanda (1990-1995) and Uganda (1980-1985) to participate in the political process?

Hippolytte Kanambe is another tutsi elite (his uncle is James Kabarebe) and his goal as Trojan Horse [1] is to further integrate/infiltrate Rwandan guerrillas and politicians into the Congo. Remember that Kanambe accompanied Laurent Desire Kabila on the US-backed invasion of Zaire and he was there, under the direct tutelage of Col James Kabarebe, when the hundreds of thousands of innocent Rwandan Hutu refugees were obliterated in one of the most — if not THE MOST — systematic cold-blooded genocides of modern times.

Further, western media reports have exaggerated the fighting between Congolese troops (FARDC) and their U.N. partner-army the Rapid Intervention Forces (RIF), against the M23: most M23 were warned in advance of an impending assault and they fled to Rwanda and Uganda. Exaggerating the "successes" of the UN and RIF serves to provide justification for the United Nations as an independent entity doling out justice for the world. Nonsense.

Meanwhile, multinational corporations operating in eastern Congo under the media radar, but soaked in Congolese blood, include Banro Gold, Casa Mining, Randgold, Mwana Africa, Loncor, Anglo-Gold Ashanti, Kilo Gold, and Moku Gold. These are U.S., Canadian, Australian, and European mining corporations and they benefit from having the Rwandan Tutsi in Kinshasa (Kanambe). They all have deep ties to the criminal extortion, money-laundering, racketeering and theft behind the plunder and depopulation in the Great Lakes countries, ties to Kagame and Museveni and their agents. 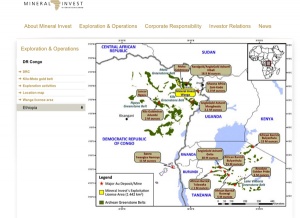 TIME Magazine this week (Nov. 11, 2013) ran a little propaganda clip by a white journalist Jessica Hatcher titled, "Saving Congo's Gorillas" [3]. In typical western media fashion, the furry primates are portrayed as the supreme victims of war in the Great Lakes region. The point is to manipulate public opinion to support further western/corporate intervention in Congo, but not for the people, rather ostensibly for the non-human primates, but really for other western corporate exploiters, including Dian Fossey Gorilla Fund, Jane Goodall Institute, Conservation International, CARE, Save the Children, UNICEF, etc. Oh, and don't forget Ben Affleck and Eve Ensler's million-dollars money-making schemes in Congo (requiring complete Ugandan and Rwandan government-war-criminal support). 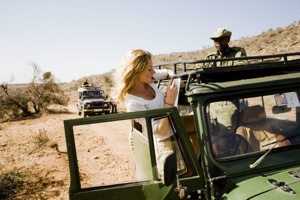 The page-and-a-half Time story offers an interesting trail for anyone interested in understanding the nature of power and the political economy of the mass media. For example, if you haven't heard, former Massachusetts Senator John Kerry is now Barrack Obama's new Secretary of State (replacing Hillary Clinton). The gorilla story doesn't mention Kerry at all, though it might have, since Kerry traveled to Rwanda and has extensive ties to Kagame. Kerry also unveiled new diplomatic cooperation (PEPFAR) with South Africa [4] (note those S. African mining companies and S. African troops in Congo!), Rwanda and Namibia (run by another criminal enterprise backed by Washington)(and, also, especially, by the world diamond cartels). PEPFAR is one of these corporate AIDS front efforts which are merely a few hops from covert operations.

Again, the short gorilla story does not mention Kerry. It does however mention a formerly mostly-unheard-of gorilla reserve, Senkwekwe Orphan Mountain Gorilla Center, described by Time as "a refugee camp for primate victims of war." Never mind the hundreds of thousands of human refugees in the region....or the ongoing genocide against Congolese peoples... And remember that the so-called "humanitarian" charity (so-called "not-for-profit") CARE INTERNATIONAL is "partnered" with BANRO GOLD Corp in the blood-drenched hills of South Kivu, DRC. [5] This is humanitarian fascism.

So, let's follow the trail Time inadvertently lays for us. Senkwekwe Orphan Mountain Gorilla Center , it turns out, gets some funding from the capitalist Buffet enterprises — in particular, the Howard G. Buffet Foundation. The gorilla story in Time doesn't tell you this. 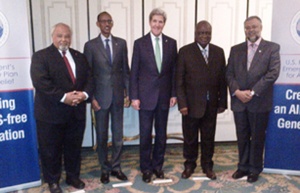 John Kerry with Kagame and others for new PEPFAR photo-op.

Time doesn't tell us that Warren Buffet, Howard G. Buffet and their companies, Berkshire Hathaway, have been deeply tied to the plunder and depopulation in the Great Lakes countries, and in Sudan. The Howard G. Buffet Foundation claims to have donated over $US 1 million to the World Food Program. Any enterprising honest journalist who wanted to look into this would find a haven of tax breaks, rotten grains, and corporate profiteering all at the expense of US taxpayers, all under the guise of the World Food Program, and involving protectionist agribusiness. Corporations like ConAgra and Archers Daniels Midland — both tied to the Buffets — that reap huge benefits by dumping shitty "food" on the World Food Program with the help of U.S. politicians and some Christian right front organizations like BREAD FOR THE WORLD.

Howard G. Buffet trumpets his African Great Lakes Peace Building Initiative, [7] but this is window dressing for profiteering and pacification of the natives. Buffet also claims to have provided "capacity-building and operations support for Virunga's National Park rangers" and "Humanitarian support for counter-LRA efforts". Unpack these claims and you will find the ugliest realities of predatory capitalism. "Humanitarian support for counter LRA-efforts" ??? What "counter LRA-efforts" — the LRA is the propaganda bogeyman Joseph Kony and his Lord's Resistance Army [8] — could possibly involve anything "humanitarian"?

Let's dig a little deeper back in Time, though, and VOILA! see what we find (found). Warren Buffet is also on the Board of Directors of the H.J. Heinz Corporation. In fact, Berkshire Hathaway acquired H.J. Heinz in June 2013. [9]

What does H. J. Heinz have to do with Congo?

Why did John Kerry really travel to Central Africa? 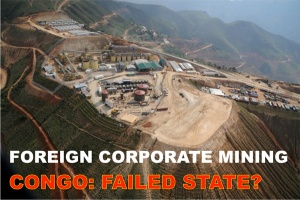 If the Congo is a "failed state" as the Foreign Policy establishment likes to pontificate, how does BANRO GOLD create such an orderly exploitation of minerals? Answer: This is "failed state" by design and proxy warrior.

What are the real Buffet interests in the region?

I will only offer a small tidbit of insight: John Kerry's wife is Teresa Heinz, of the H.J. Heinz fortune.

Bottom line: THERE IS NOTHING ABOUT ANY OF THE RECENT REPORTAGE IN ANY MAJOR WESTERN VENUE THAT TELLS ANYTHING CLOSE TO THE WHOLE TRUTH ABOUT THE ONGOING GENOCIDE AND DEPOPULATION IN AFRICA.

If you are consuming the western mass media (Time Magazine, New York Times, New Yorker, etc.) you are contributing to your own mental illness, and to the war against the people of Africa.