The Population Council is an international, nonprofit organization that seeks to reduce the reproductive rate among poor people ('to help achieve a humane, equitable, and sustainable balance between people and resources'). The Council conducts biomedical, social science, and public health research and helps build research capacities for this purpose in developing countries.

The Council works with governments and finances civil society organizations in research and programs in more than 50 countries, with a global network of offices in Africa, Asia, Latin America, and the Middle East.

Founded by John D. Rockefeller III in 1952, The Population Council's primary aim was to equip and staff itself as the organization uniquely qualified to be called upon by governments at a later date to initiate personnel training for population programs, a "foot in the door" tactic to control this policy area.

Over the last 70 years, it has used the Rockefeller's extensive network and influence over the World Bank and other international institutions to make grants and loans to poorer countries conditional on following the U.S. elite's population reduction plans.

Its first president (1952-1959) was Frederick Osborn, earlier one of the founding members of the American Eugenics Society in 1926, an organization founded to promote eugenics in the general public. After the horrors of the German Nazi regime created popular revulsion for eugenics, Osborn moved the AES headquarters into Population Council, changed selling angle, and represented a reformed presentation of eugenics. He is credited by later eugenicists with providing the American eugenics movement with a program that abandoned the race- and class-focus of the earlier period and tied eugenics closely to science.

In his 1951 book Eugenics, Osborne complained that with America's incleasing survival rates, "Natural selection by death has almost come to a halt," and wrote: "The eugenic problem is to find means by which the people with the genetic potential most fit to survive in and contribute to our complicated society will tend to have the largest families, while at the same time those with a poorer genetic potential will have smaller families."[1]

Its third president (1968-1974) was Bernard Berelson, who worked hard on communication research. One of his innovations was an audiovisual kit for delivering family planning messages to nonliterate communities. 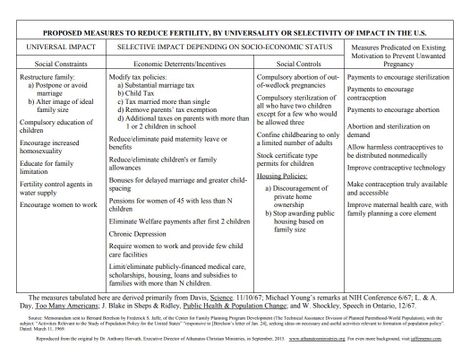 The Jaffe Memo was written by Frederick S. Jaffe in 1969 to Bernard Berelson while he was president. It included a table that summarized many proposals from various sources regarding population control,[2] such as:

The table was included in a report by a Planned Parenthood official that worked for Jaffe, that said "The report was prepared in behalf of Planned Parenthood's Population Education Staff Committee as a basis for discussion of and action on the U.S. population problem by the Planned Parenthood national organization."[3] Berelson and Jaffe would work together on the 1972 Rockefeller Commission Report.[4] Many of the ideas discussed in the memorandum were incorporated into the Rockefeller Report.