Attenborough is best known for writing and presenting, in conjunction with the BBC Natural History Unit, the nine natural history documentary series forming the Life collection that constitute a comprehensive survey of animal and plant life on Earth.

He has also talked for decades about the elite agenda of overpopulation and how that drives climate change. These warnings have found an eager reception in assemblies of powerful people and the corporate media they own. He has however provided few specifics of what to do, and in public says the solution involves persuading people that their lives and the lives of their children would be better if they didn't exceed a certain number of births per family.[1]

Attenborough, whose 2015 interview by Barack Obama about climate change was screened in more than 50 countries, has contributed a huge amount to shaping world opinion on environmental issues. UN Head of Environment Erik Solheim said “few people have inspired action for the planet” like him.[2]

He is a member of the Optimum Population Trust, was a friend of Prince Philip[3], has described human beings as a “plague on the Earth” and said sending food to famine-ridden countries is 'barmy'[4]

“For the past 20 years I've never had any doubt that the source of the Earth's ills is overpopulation. I can't go on saying this sort of thing and then fail to put my head above the parapet..”
David Attenborough (2009)  [5] 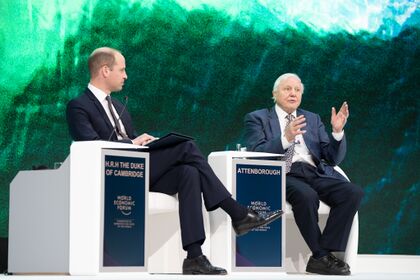 David Attenborough and Prince William at the World Economic Forum 2019.

“We now know the disasters that continue to inflict the natural world have one element that connects them all… The unprecedented increase in the number of humans beings on the planet...It needs actions by governments. In my view, all countries should develop a population policy”
David Attenborough (2011)  [6]

“All our environmental problems become easier to solve with fewer people and harder - and ultimately impossible to solve - with ever more people.”
David Attenborough (2018)  [7]

“I have no doubt that the fundamental source of all our problems, particularly our environmental problems, is population growth. I can’t think of a single problem that would be easier to solve if there were less people”
David Attenborough (January 2020)  [8] 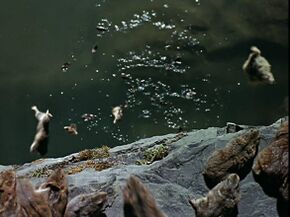 The documentary he spoke about, with animals falling off a cliff due to climate change, is somehow reminiscent of the situation with White Wilderness; a 1958 Disney "documentary" that misrepresented migration behavior of Lemmings and implied that due to "overpopulation" some animals will see to drown to help the situation.[9][10][11]

Attenborough hid the truth[12] about hundreds of walrus falling off Siberian cliffs to their deaths filmed for a Netflix documentary – he insisted this was due to climate change[13], a story he retold at the 2019 World Economic Forum in Davos[14], even though it could be shown he was well aware the animals fell because they were being stalked by predatory polar bears.[15][16]

This page imported content from Wikipedia on 22.09.2021.
Wikipedia is not affiliated with Wikispooks.   Original page source here

A Quote by David Attenborough