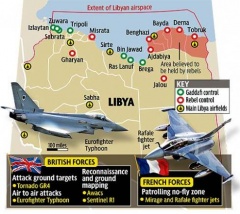 The House of Commons Select Committee on Foreign Affairs, chaired by Crispin Blunt, a Conservative MP, has produced what can only be described as a comprehensively damning report "Libya: Examination of intervention and collapse and the UK’s future policy options" (HC 119, 14th September 2016) on David Cameron and the Conservative Government’s appalling policy blunders in Libya.[1] The full report is to be found here.[2]

Ironically the report is published the day after Cameron resigned as an MP, and only yesterday was presented to the British public almost across the print and broadcast media as a plausibly competent Prime Minster whose only mistake or greatest success was Brexit (except notably by the Daily Telegraph, but that is another story). A day is a long time in politics. Of course, he wasn’t competent. Here is the first paragraph of the Select Committee Report:

“In March 2011, the United Kingdom and France, with the support of the United States, led the international community to support an intervention in Libya to protect civilians from attacks by forces loyal to Muammar Gaddafi. This policy was not informed by accurate intelligence. In particular, the Government failed to identify that the threat to civilians was overstated and that the rebels included a significant Islamist element. By the summer of 2011, the limited intervention to protect civilians had drifted into an opportunist policy of regime change. That policy was not underpinned by a strategy to support and shape post-Gaddafi Libya. The result was political and economic collapse, inter-militia and inter-tribal warfare, humanitarian and migrant crises, widespread human rights violations, the spread of Gaddafi regime weapons across the region and the growth of ISIL in North Africa. Through his decision making in the National Security Council, former Prime Minister David Cameron was ultimately responsible for the failure to develop a coherent Libya strategy.”

This article is not written as an act of political opportunism. Bella Caledonia published two articles specifically on British policy and its consequences in Libya, written in a small attempt to draw attention to the appalling policy failures committed by Britain that turned Libya into a failed state, overrun by terrorists, which gave IS/Daesh a platform of operation in Libya, and turned the Mediterranean red with blood, and the washed-up human debris created by chaos and anarchy. The first article was "Walking Away: the Formation of British Foreign Policy" (24th February, 2015).[3]

The second was "Deserting Libya: the rhetoric of British foreign policy" (28th September, 2015).[4] In this second article I closed with the following argument, which I think relevant because it confirms that anyone prepared to read then what was openly available to inspection in the public domain, and think carefully about the British government’s policy, could see that British policy was seriously defective and Britain was committing a blunder of major proportions that would have long and bitter consequences. I wrote then that I had attempted in the first article '‘Deserting Libya’' very carefully only to use Government sources or sources/evidence that could scarcely be challenged by Government, in order to explore the failure and self-delusion of British Foreign Policy in Libya. I believed the Government’s position on Libya was annihilated by the swiftness and the scale of the catastrophe it recklessly invited upon its botched policy; and not least by the fact that the clear and manifest opposition of wiser and more experienced judgement (or simple attention to obvious facts and bitterly earned experience) was ignored by irresponsible and too easily influenced British politicians who quite clearly lacked either judgement or experience.

Such articles were met by indifference in official or political circles, or mere hubris, ignorance or folly in the mainstream media. In another irony, this new Select Committee report follows an only too familiar tale of dubious intelligence, ‘'hammed-up'’ (not my term) media reporting and spin, and all the grotesqueries of modern British government that we have seen so often before both in home and foreign policy; so bad, so unsustainable, so obvious that it has finally sunk the last sad vestiges of Westminster’s credibility and integrity with the British people, and, '‘a fortiori’' and some time ago, with the Scottish people. The Select Committee Report simply repeats the familiar exposé of the same kinds of policy and intelligence failure that we saw in Iraq (but which took over a decade to extract the horror story of British blunders), in Afghanistan and in Syria.

We should not be beguiled into believing that this is purely a failure of David Cameron alone; how much the Conservative Party prays that the public will buy that canard, and pass over the cesspit of squabbling ferrets improbably led by such as Theresa May, Boris Johnson and Liam Fox, paralysed into political catalepsy by their own folly over Brexit, that is the hallmark of this Conservative Government. They survive only because the Labour Party is unelectable, and that brings us back to the real problem at the bottom of this concatenation of hapless political failures: Westminster.

Cameron merely follows Tony Blair as a well-groomed, over-promoted victim of British hubris undone. Meanwhile, David Cameron slinks into the long grass merely to avoid exposing the contradictions that will develop within the Conservative Government and Party, or making obvious the toxic intellectual imbecilities at the heart of the Party. This resignation is all about appearances.