Document:Libya: Fine, but why Britain 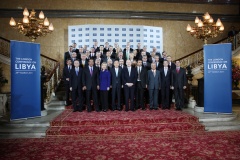 Photo-call of participants in the March 2011 London Conference on Libya that resolved to support military action against Libya pursuant to 2011 UNSC resolutions 1970 and 1973.

Libya: Fine, but why Britain

David Cameron had earned generous tributes to his success in securing a tough Security Council resolution on Libya, authorising an air war against Gaddafi: but why did he (and most of the media and the chattering classes) think it necessary for Britain to play such a prominent part in it? Come to that, why does everyone assume that if there’s to be an air war over Libya, British aircraft and their crews must play a prominent part in it?

When Mr Cameron first called so stridently for a Libyan no-fly zone, he was rightly criticised for imprudently getting ahead of our allies and partners, and laying himself open to the suspicion of dreaming of another Iraq – another western attack on a middle eastern Muslim country, unlikely to win the approval of the Security Council, liable to unite the Arab world against us and involving another open-ended military commitment that the country couldn’t afford. Suspicion was intensified when Cameron and his supporters, bear-led by a raucous Malcolm Rifkind, started to claim, implausibly, that if the Security Council ‘failed’ to authorise a Libyan no-fly zone, it could still be set up legally under cover of some other alleged provision of international law unknown to the law books. Serious and well-founded doubts were expressed about the chances of a no-fly zone having a decisive effect on the civil war now being fought in Libya: the main threat posed to the rebels by Gaddafi’s forces comes from his tanks, artillery and other ground forces, much less so from his air force. The fact that the only other voice calling loudly for a no-fly zone came from French President Sarkozy, enthusiastically advocating every kind of mayhem in response to the Libyan situation, did nothing to dispel doubts about the wisdom of the exposed position that Cameron had chosen to occupy. Nor did it seem well judged to have committed Britain so early on to such a controversial, activist policy when there was so far no consensus in its favour either within the EU or NATO, or even with the Americans, whose active participation would clearly be indispensable if ever a no-fly zone were to be established.

Then on Thursday after long days of negotiation in New York the United Nations Security Council adopted resolution 1973 (2011) of 17 March, adopted by ten votes in favour, none against and five abstentions. The resolution, all 22 preambular and 29 operative paragraphs of it, duly authorises an air war against anyone in Libya whose actions threaten the safety of civilians. (It does many other things too, but that’s the core of it.) Cameron (and Sarkozy) could perhaps be forgiven, after the flak they had been taking, for claiming that with this UN decision they had been handsomely vindicated. Both leaders instantly committed their countries to leading roles in the execution of the resolution, and started moving their fighters and bombers ready for the fray.

Despite the certainty of being accused of sour grapes, I suggest that a number of reservations need to be made and questions asked about the vindication theory, and about the justification for the praise heaped on Mr Cameron at the special session of the House of Commons on Friday.

First, our Prime Minister’s timing was seriously ill judged. By jumping in with his call for a no-fly zone ahead of proper consultation with our principal allies and partners, he jeopardised President Obama’s canny strategy of waiting for an appeal by the middle east’s regional governments, represented by the Arab League, the African Union, the Organisation of the Islamic Conference, and other associations, for UN action against Gaddafi, so as to avoid giving any impression that this was yet another US-led, western intervention against a sovereign, independent Arab Muslim state, on the pattern of Iraq and Afghanistan. While Obama was patiently withholding any firm pronouncement for or against a no-fly zone, meanwhile encouraging the Arabs to call for one and consulting the Russians on the kind of UN resolution that they would not feel compelled to veto, Cameron was already noisily committed to a no-fly zone and to a prominent UK role in enforcing it.

Secondly, it never seemed likely that action confined to a no-fly zone would be enough to stem Gaddafi’s progress towards the recapture of Benghazi and the other areas still under rebel control. This potentially lethal deficiency in the Cameron proposals is handsomely remedied in the Security Council resolution, which authorises (indeed actually imposes) a no-fly zone but also, much more significantly, permits air attacks on military targets on the ground – tanks, artillery, military vehicles or convoys, etc., and not just aircraft – if these are threatening civilians.

Thirdly, even resolution 1973, with its call for a cease-fire before anything else happens, carries with it the risk of committing the participants in the air war against Gaddafi indefinitely to increasingly controversial military activity with increasingly dubious prospects of anything resembling “success” if Gaddafi’s forces are fought to a standstill, declare and observe a cease-fire, and sit tight in a total stale-mate, with Gaddafi in secure control of Tripoli and perhaps the main oil installations. What then? Escalate to intervention with ground troops, with the only possible objective of régime change – a war aim that the Security Council could and would never authorise? It’s all very well to say that “we” (who?) can’t stand idly by while thousands of Libyan civilians are slaughtered, and to brush off concerns about the very possible consequences of our actions with the tired old formula about crossing that bridge when we come to it: but that was exactly the kind of lack of foresight and anticipatory planning that landed us all in such a comprehensive mess in Iraq.

Can we afford it?

Fourthly, perhaps most fundamentally (and most controversially), why should it be Britain which not only leaps into the lead in demanding military action, however sorely needed, against a middle eastern Muslim régime, however repressive, but also insists on playing a prominent part in the military action as soon as it has UN authority? Britain has no special or unique responsibility for the protection of Libyan civilians, compared with (for example) Italy, whose colony Libya used to be, or France, which more than any other western country has apparently supplied Gaddafi with more and more sophisticated weaponry, including updating and modernising his Mystère jet fighters.

The logic of the situation suggests an Arab-led operation, with a few select and respectable western countries in discreet support. Britain is more heavily engaged in Afghanistan than any other western country except the US, and undertaking yet another active military operation in yet another country in the region risks gross over-stretch of our defence resources. Britain, more than almost any other western country apart from Greece and Ireland, has opted to tackle its international debt and budget deficit by ferocious cuts in almost all its social and welfare services, gratuitously adding to unemployment, smothering demand in the economy, and risking driving its economy into a second recession even more severe than the first: what further swingeing cuts (or new borrowing) will be needed to pay for another military adventure in which no major national interests are at stake?

It would have been prudent to encourage two or three rich Arab states to play a prominent part in the air war that is now beginning. It would have displayed political and diplomatic sensitivity for the country which played such a prominent role in the illegal attack on Iraq, and is still so prominently engaged in an increasingly unpopular war in Afghanistan, to leave it to others to force the pace over Libya and then to contribute its airmen and women, and military hardware, to the combat.

There seems to be a strange kind of British love affair both with war and with the idea of leadership. No doubt there are sound historical reasons for our subconscious association between war and glorious victory, and a similarly deep-seated assumption that if there’s going to be a war, Britain must automatically be playing the “leading role” in it – an obvious imperial hangover. It’s no coincidence that the country which had the most worried doubts about the call to arms in Libya, and which abstained from the vote on UNSCR 1973 on Thursday, was Germany, whose subconscious associations are doubtless very different. In Friday’s parliamentary sitting on Libya, almost every fulsome tribute to the Prime Minister’s brilliant success referred to his, and Britain’s, “leading role” in securing the Security Council resolution. (The tributes to the success of the British diplomats at the United Nations in New York who had taken part in the heavy lifting of negotiating the terms of the resolution were surely much better earned.)

In much the same way, those in politics and the media who argue against the immediate withdrawal of all British forces from Afghanistan, where their presence is fairly obviously doing more harm than good, almost invariably talk as if “our” withdrawal would be the same thing as the withdrawal of the Americans and all the other members of the coalition in Afghanistan, leaving the country defenceless against the return of the Taliban, with al-Qaida in tow. The idea that the Americans and their other partners might soldier on without Britain never seems to occur to these arm-chair warriors. Nor, it now appears, can the same proud patriots conceive of the enforcement of the Security Council resolution on Libya without Britain in a starring role. They are seemingly quite impervious to the inconvenient facts that the nimble M. Sarkozy stole in front of Mr Cameron in campaigning for military action against Gaddafi and then stole Britain’s thunder again by ensuring that a French warplane would be the first to fire at a Libyan military vehicle.

Those of us who found Tony Blair’s itch for military intervention, and his obsession with British leadership, obnoxious and alarming were, it now seems, premature in celebrating his departure from UK politics. Blairism rides again, personified in the strident and triumphant voices of Sir Malcolm Rifkind and Mr David Cameron. They have taken a huge and above all a totally unnecessary gamble. We can only hope that it will pay off.[1]