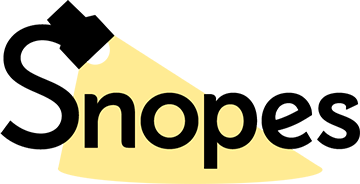 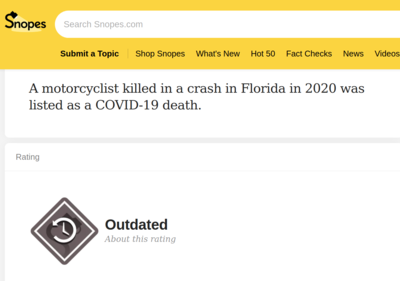 Snopes.com noted that "It does appear to the case, however, that a motorcyclist who was killed in a traffic accident also tested positive for COVID-19, and was initially listed among Florida’s COVID-19-related deaths", but listed the claim as "Outdated" rather than "True".

Snopes is a long established website which emerged from the alt.folklore.urban newsgroup and was originally a reference site about urban legends. In recent years it has become a staunch defender of the official narratives, to the extent that it has been referred to as "the go-to website for CIA propaganda".[1] Craig Murray has used this fact to direct his research, using Snopes superficial refutations as suggestive of a deeper story.[2] 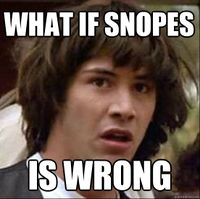 "We are to believe that one man, David Mikkelson, with “assistants” he’d hired from Snopes’ message board, manages to pump out a steady stream of researched articles every day."[3] In 2020 Mikkelson reported that "only 10 people work in our newsroom".[4] 'Magnora7' remarked on Saidit that "the thing with snopes is they're accurate, but they never address the real question at hand."[5]

On 23 July 2020, Snopes rated "Was a Fatal Motorcycle Crash Listed Among COVID-19 Deaths in Florida?" as "Outdated" (that is "original truth rating irrelevant")[6] since the the decision was reclassified:

“It does appear to the case, however, that a motorcyclist who was killed in a traffic accident also tested positive for COVID-19, and was initially listed among Florida’s COVID-19-related deaths. But officials from the Florida Department of Health said that person has since been removed from the count.”
' [7]

The #5 of Snopes' 9-11 conspiracies, about the wingdings font from Microsoft Windows

Snopes has a category of "9/11 conspiracies" in which it presents a range of 9-11 related rumors with minimal deep political content.[8] As of 2017, their top conspiracy was the claim that Nostradamus predicted the September 11 attacks, which they term "the granddaddy of all 9/11 rumors", #2 concerned a rescue dog named Daisy, #3 was about a beer advert, #4 a faked digital photo of a tourist and #5 the windings font.[9]

Snopes stated that the rumour that "the U.S. government was sued and found culpable for the murder of Martin Luther King, Jr., but the news media refused to report it" was "mostly false", starting its article "Intermittently, rumors have circulated on social media holding that the United States government was found guilty in 1999 of conspiring to assassinate Martin Luther King, Jr. Furthermore, according to these rumors, the reason this relatively new information (King was murdered on 4 April 1968) comes as a surprise to many is the “mainstream media” intentionally suppressed it after the government’s role in King’s death was exposed. It’s common for exaggerated claims to contain a few elements of truth, and that factor comes into play in this conspiracy theory rumor for a few reasons."[10]

While the site does admits that the jury unanimously found that "others, including governmental agencies, were parties to this conspiracy as alleged by the defendant", it states that “the verdict was of no real significance given that virtually nothing was at stake (this was not a criminal trial, and the defendant was only being sued for a mere $100 and thus had little motivation for vigorously defending himself, allowing the King family to present a mostly unopposed version of events and guide the jury to return the verdict they desired.” [11] 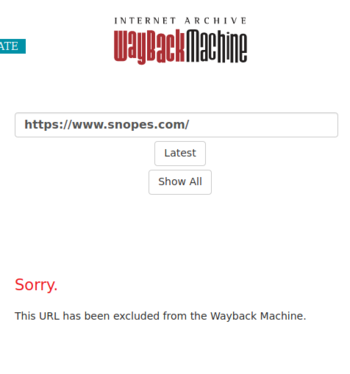 The snopes.com domain is excluded from the Internet Archive, making checks on their statements in the past more difficult.

The Snopes' Field Guide to Fake News Sites and Hoax Purveyors is cited by the Poynter Institute list of "Fake News" outlets.

On 13 June 2016, Snopes reported that "an irresponsible Facebook post [2 days earlier] claimed that multiple gunmen were involved in the mass shooting at Orlando Pulse, and that two of them were still at large."[12][13]

A 2010 email notes that "Snopes receives funding from an undisclosed source. The source is undisclosed because Snopes refuses to disclose that source." Alan Strong posted an article in 2013 entitled Snopes is a Fraud and this needs to be repeated about his dealings with David Mikkelson which concluded that "Many people still think Snopes.com is neutral and they can be trusted as factual. We need to make sure everyone is aware that that is a hoax in itself."[14]

Snopes is a recommended "fact checker" by Dave Van Zandt's Media Bias/Fact Check. Snopes partenered with Facebook to do "fact checking", but announced on February 1, 2019 that it would end this partnership as part of a "difficult, but necessary change."[15]