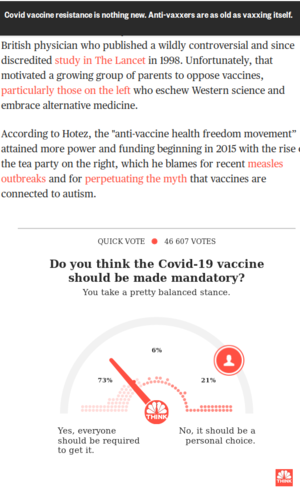 "Should the Covid-19 vaccine be mandatory?" A poll at the foot of an NBC News article subtitled with the warning that "the country almost certainly can’t rely on soft tools such as education and incentives alone to get sufficient numbers of people vaccinated."[1]

“Dr Joseph Fair appeared at least 10 times on NBC and MSNBC over the last two months to share his fight against Covid-19 with the networks’ viewers. His television appearances – including an interview from his hospital bed – fueled panic about the illness. Describing himself as a fit and healthy 42-year-old, Fair claimed in May that he had absorbed the virus through his eyes while on a flight. As it turns out, there is no reason to believe he ever contracted the virus.”
' [2]

Global Research reports on an investigation by the Public Accountability Initiative into the TV appearances of a set of war pundits with known toes to weapons manufacturers which found that out of "16 appearances on NBC or its umbrella networks, attempts at disclosure were made five times."[3]