The assassination of US President, John F. Kennedy in Dallas, Texas, on November 22, 1963, was the seminal deep event in the evolution of the modern day[1] US Deep state. Blood guilt fused a somewhat ad hoc alliance of perpetrators, into a deep state which Mark Gorton termed "The Cabal".[2] Unknown to most people for decades, this group dominated US politics up to the present day.[3] After aggressively consolidating its hold over the US government during the 1960s, Peter Dale Scott has researched how the same group resisted pushback by a still relatively uncorrupted US congress in the 1970s by offshoring and becoming supranational in nature.

The proportion of people disbelieving the "lone nut" theory has consistently exceeded 50% since the event[11] although as Russ Baker noted in 2022, "most media continue to dismiss widespread — and justifiable — public skepticism of the Warren Commission report", terming it "an ongoing study in the power of misinformation".[12] 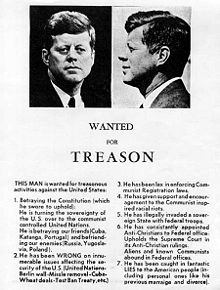 President John F Kennedy was assassinated by gunfire as he traveled in a motorcade in an open-top limousine in Dallas, Texas on Friday, November 22, 1963 (12:30 pm, CST); Texas Governor John Connally was wounded during the shooting, but survived. Within two hours, Lee Harvey Oswald was arrested for the murder of Dallas policeman J. D. Tippit and arraigned that evening. Shortly after 1:30 am, Saturday, Oswald was also arraigned for murdering President Kennedy.[13][14] On Sunday, November 24, at 11:21 am, US deep state functionary Jack Ruby shot and killed Oswald as he was being transferred to the county jail.

Immediately after the shooting, many people suspected that the assassination was part of a larger plot.[15] Ruby's shooting of Oswald compounded initial suspicions.[15] Mark Lane has been described as writing "the first literary shot" with his Defense Brief for Oswald in the December 19, 1963 edition of the National Guardian.[16] [17] Thomas Buchanan's Who Killed Kennedy?, published in May 1964, has been credited as the first book alleging a conspiracy.[18]

Many people were immediately suspicious of the claim that JKF was killed a "lone nut". Two days after the event, Nicholas Katzenbach (the Deputy Attorney General) wrote in a now declassified memo to Bill Moyers (White House Press Secretary) that "the public must be satisfied that Oswald was the assassin" and that "speculation about Oswald's motivation ought to be cut off". He suggested "the appointment of a Presidential Commission of unimpeachable personnel". This was to bear the name of the US Chief Justice, Earl Warren. Initially unwilling, Warren was blackmailed to take part by Richard Russell[19] although the commission was run by Allen Dulles, the CIA director whom JFK had fired. 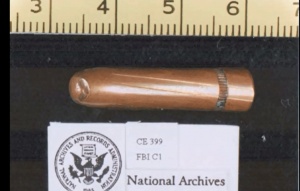 Lyndon B. Johnson appointed the Warren Commission as Katzenbach had suggersted, to try to bolster faith in the claim that Lee Harvey Oswald was solely responsible. After cherry-picking of evidence and intimidation of witnesses by the FBI, the commission duly reported that Oswald acted alone and that "no credible evidence" supported the contention that he was involved in a conspiracy to assassinate the president.[20] According to the Warren report, Oswald fired three shots in six seconds (although leaving four bullets and without leaving any residue of nitrate on his cheek). They also concluded that one of the bullets, later termed the "magic bullet", managed to cause seven entry/exit wounds penetrating 15 inches of tissue, 4 inches of rib and a radius bone to come out in almost perfect condition. These results have never been duplicated.[21]

Many people connected with the JFK assassination suddenly died, including witnesses, some of those involved,[22][23][24][25] those with foreknowledge as well as those who had determined to uncover the truth[26][27][28][29][30]. As well as suicides or accidents, some of these obvious assassinations, such as that of Lee Harvey Oswald himself.

In 1979, the United States House Select Committee on Assassinations (HSCA) agreed with the Warren Commission that Oswald assassinated Kennedy, but concluded that the Commission's report and the original FBI investigation were seriously flawed. The HSCA stated that "the Warren Commission failed to investigate adequately the possibility of a conspiracy to assassinate the President.[4][31] The HSCA concluded that John F. Kennedy was probably a victim of a conspiracy based off gunshots recorded in Dealey Plaza on police radio. Six impulses were recorded but due to budget restrictions the HSCA could only have four of them analyzed. The Analysis concluded that the four impulses analyzed were gunshots and that shots three and four occurred within seven tenths of a second of each other. The HSCA also concluded the fourth shot came from the grassy knoll adding there was a second shooter. With a peer reviewed study backing The HSCA investigation, [32] it destroys the Official Narrative that Oswald was a "lone nut" . [4]The HSCA asked the Justice Department to reopen the case but the department has declined to do so.[33]