Adlai Edwing Stevenson II was an American politician and diplomat, noted for his intellectual demeanor, eloquent public speaking, and promotion of progressive causes in the Democratic Party. From 1949 to 1953 he served as the 31st Governor of Illinois.

Adlai Stevenson received the Democratic Party's nomination for president in 1952 US Presidential election, even though he had not campaigned in the primaries. He was defeated in a landslide by Republican Dwight D. Eisenhower. In 1956 he was again the Democratic presidential nominee against Eisenhower, but was defeated in an even greater landslide. After the 1956 campaign, Stevenson formed a legal firm with W. Willard Wirtz "that strictly abstained from politics" and whose clients included the De Beers diamond merchant Maurice Tempelsman.[1]

Stevenson sought the Democratic presidential nomination for a third time in the election of 1960, but was defeated by Senator John F. Kennedy of Massachusetts.

US Ambassador to the UN

Upon his inauguration on 20 January 1961, President Kennedy appointed Adlai Stevenson the United States Ambassador to the United Nations in New York. 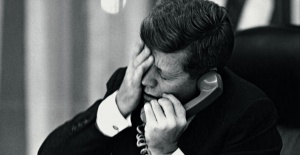 Three days earlier, in a coup allegedly engineered by Maurice Tempelsman with the connivance of the CIA and MI6, Congolese Prime Minister Patrice Lumumba had been murdered in Katanga province. James DiEugenio noted:

"The information about his death was kept from President Kennedy for almost a month. He did not learn about Lumumba's murder until February 13th. He learned of it on a phone call with UN Ambassador Adlai Stevenson. White House photographer Jacques Lowe captured the moment in a crystalline photograph."[2]

Stevenson remained en poste at the UN until he died on 14 July 1965, in London after suffering a heart attack.