The American Herald Tribune (AHT) was an independent media site with many members, often fiercely critical of US foreign policy. Its editor in chief, Anthony Hall, is based in Canada. In November 2020, its aht.com domain name was seized by the US government, but by December it was up and running again as the Canadian https://ahtribune.ca. By March 2021, also the Canadian site had a note stating it was seized by the FBI and the attorney's office for the Northern district of California[1]

Shut down by the US government

On 4. November 2020, the US Department of Justice (DOJ) shut down the newspaper's website, along with 27 other online domains, claiming the websites were controlled by Iran’s Islamic Revolutionary Guard Corps (IRGC). The AHT and 4 other domains were confiscated under the Foreign Agents Registration Act, the remaining 23 domains were seized "as they targeted audiences in other parts of the world."[2][3]

Particular contributors that might have motivated the government's ire, are people like the AHT independent writer Philip Giraldi, an 18-year veteran of the CIA’s Clandestine Service and and an articulate critic of US wars in the Middle East and of Israeli influence on American policy and politics; or Miko Peled, an Israeli peace activist. 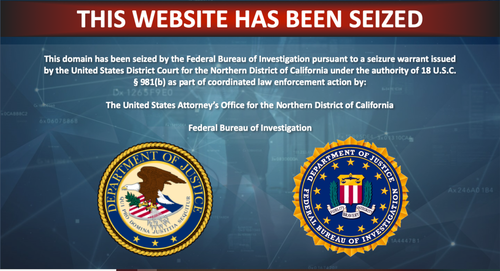 Screenshot of Ahtribune.com after the confiscation

US government machinations for ban on Social Media

In 2018, the FBI encouraged Facebook, Instagram and Google to remove or restrict ads on the American Herald Tribune. Editor Anthony Hall stated[4] that the removals occurred at the end of August 2018, but there was no announcement of the move by Facebook. Nor was it reported by the corporate news media until January 2020, when CNN elicited a confirmation[5] from a Facebook spokesman that it had indeed done so in 2018.

The ban was also boosted by the cybersecurity firm FireEye, which has been used by the Department of Homeland Security as a primary source of “threat intelligence”. CNN cited an unnamed official of FireEye stating that the company had “assessed” with “moderate confidence” that the AHT’s website was founded in Iran and was “part of a larger influence operation.” ( The bland term “moderate confidence” comes from US intelligence agencies parlance and means there is plenty of room for doubt[6].)