The PSC campaigns for peace and justice for Palestinians, in support of international law and human rights. PSC states that it is "opposed to all forms of racism, including anti-Jewish prejudice and Islamophobia".[2] It has stated that it opposes both "Israel’s occupation and its aggression against neighbouring states"[3] Whilst recognising differences between apartheid-era South Africa and Israel, PSC promotes the boycotting of Israeli goods as a method that it believes was previously successful in achieving political change.[4]

PSC's stated goals include the right of return for Palestinians and Israeli withdrawal from the occupied territories.[5] The PSC has criticised Israel's practices when arresting children.[6]

Activities organised by and statements from the PSC are reported on outlets such as the website The Electronic Intifada.[7] 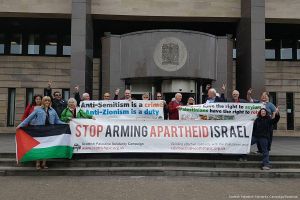 Scottish PSC activists outside the Court

On 14 July 2017, members of the Scottish Palestine Solidarity Campaign emerged from Glasgow Sheriff Court victorious after being accused of racism for standing up to Zionism. The trial ended three years of speculation and pressure for SPSC members whose robust defence of their actions in five days of evidence and cross-examination focused on the actions of two SPSC members who faced charges of racism and aggravated trespass for a protest against Israeli company Jericho Cosmetics, which operates around the Dead Sea in the occupied West Bank. The protest was held in the wake of Israel’s 2014 military offensive against Palestinian civilians besieged in the Gaza Strip. More than 2,200 Palestinians were killed by the Israelis during the offensive, including 550 children, before the war ended on 26 August 2014. During the demonstration on 13 September 2014, the SPSC protesters denounced the killings.

Police were called to the shopping centre where the protest was being held, leading to the arrest of the two SPSC members accused of racism. “In other words,” explained Mick Napier, one of those arrested, “we were accused of being motivated by hatred of Israelis rather than opposition to Israel’s repeated massacres, apartheid across the whole of Palestine and genocidal violence in Gaza.”

During the Glasgow trial, the SPSC was buoyed by a High Court ruling in London that the Conservative government in Westminster acted unlawfully when it tried to prevent local councils in Britain from divesting from companies involved in Israel’s military occupation. The successful legal challenge for Boycott, Divestment and Sanctions, the right to boycott, was brought by the Palestine Solidarity Campaign in London, supported by War on Want, the Campaign Against the Arms Trade and the Quakers.[8]

However, Napier wasn’t convinced that the result of the latest trial was a foregone conclusion. “Given their past record, we felt it was unlikely that even this High Court ruling in favour of BDS would stop Scottish prosecutors’ related efforts to criminalise the campaign in support of Palestinian freedom.”

The prosecutor — called the Procurator Fiscal in the Scottish legal system — claimed in open court that the two accused in the Glasgow case were recycling an ancient anti-Semitic “Jewish blood libel” by speaking about Israeli mass murder of Palestinians. The Procurator Fiscal’s office made these claims, said Napier, while the violated people of Gaza “were still looking for ice-cream freezers and vegetable refrigerators in which to store the bodies of children killed by Israel’s military.”

In their testimony last month, Napier and his co-accused Jim Watson both rejected the claims made by prosecution witnesses, a Chief Inspector of police, the manager of the Jericho stall and two local Zionist activists. The prosecution claim was that staff were intimidated by “racist” placards and the shouting of “racist abuse”; this was the description of the SPSC’s criticism of the pro-Israel counter-demonstrators for supporting Israel’s most recent massacre of Palestinians.

The “racist” placard with which the Procurator Fiscal and Zionist witnesses took particular issue was a symbolic but graphic image of blood dripping under the name “Dead Sea cosmetics”. Napier pointed out that at the time of their protest, the UN Secretary-General was describing Israel’s massacre of thousands of Palestinians as a “moral outrage and criminal act” and a “gross violation of humanitarian law.”

“When the Scottish government joined in by denouncing the ‘deep inhumanity’ of the Israeli massacre,” noted Napier, “the Scottish Procurators Fiscal were working hand in glove with pro-Israel lobby groups to silence voices of Palestine solidarity.”

The SPSC has faced repeated efforts by pro-Israel lobbyists and Scottish prosecutors to criminalise the group’s pro-Palestine activities. The Zionist record to-date is one of almost total failure; legal action has failed to secure any convictions of pro-Palestine activists. “There was, however, a consolation prize for the Zionists when we were both found guilty of refusing to leave the shopping centre when asked to do so by the police,” said Napier. “I was also convicted of aggravated trespass for protesting inside the shopping centre. We will be appealing against both convictions so any celebrations by the Zionists will, I suggest, be a bit premature.”

In February last year, two employees of the pro-Israel Community Security Trust made allegations against SPSC members but that was also thrown out by Kilmarnock Sheriff Court when the Sheriff ruled that the crime as alleged had not taken place. “Had we not had the benefit of an Al_Jazeera Arabic language broadcast of the protest where the CST tried to secure an assault conviction there might have been a different outcome,” added Mick Napier.[9]

This page imported content from Wikipedia on 20 October 2017.
Wikipedia is not affiliated with Wikispooks.   Original page source here
Retrieved from "https://wikispooks.com/w/index.php?title=Palestine_Solidarity_Campaign&oldid=220575"
Category: