Document:Easter 1916: When a terrible beauty was born 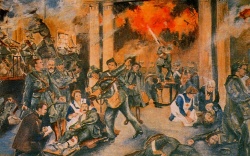 The following quotation from the writings of James Connolly is a telling forecast of the future of a nominally "independant" Ireland that deserves repetition:

“...if you remove the English army tomorrow and hoist the green flag over Dublin Castle, unless you set about the organization of the Socialist Republic your efforts would be in vain. England would still rule you. She would rule you through her capitalists, through her landlords, through her financiers, through the whole array of commercial and individualist institutions she has planted in this country and watered with the tears of our mothers and the blood of our martyrs.”

Is that not a near-100% accurate description of present day Ireland on the eve of the 100th anniversary of those momentous 1916 events?

Easter 1916: When a terrible beauty was born

William Butler Yeats' epic poem on the Easter Rising of 1916 immortalized an event that possesses all the elements of a Greek tragedy and which 100 years later is still capable of stirring strong emotions.

The audacity and bravery, bordering on insanity, of just over 1200 combined Irish Republican Brotherhood Volunteers, led by Patrick Pearse, and Irish Citizen Army Volunteers, led by James Connolly - which on Easter Monday 1916 merged to form the Irish Republican Army - unleashing an armed rising in Dublin against the British state has rarely been equaled. Making the event even more astounding is the fact that when it took place Britain controlled an empire covering a quarter of the globe and had a million men under arms. Most of those men, conscripts, were participants in and victims of the mass slaughter that was unfolding in Europe at the time, more commonly known as the First World War.

The inalienable right of an occupied people

What was inarguable a century ago, and remains so today, is that the moral right of an occupied people to rise up and resist their occupation and colonization is inalienable. In this regard the Irishmen and women who took up arms on Easter Monday 1916 stand as a testament to the spirit of emancipation and rebellion that resides in all of us but remains suppressed in most beneath the crushing weight of the ideological chains of the status quo.

Whether we are aware of it or not, those chains are enforced and renewed every minute of every day as we go about our daily lives, during which the received truths of the dominant ideology scream at us from every advertising billboard, every TV show, movie, and news broadcast. It is why events such as the Easter Rising in Dublin, the Bolshevik Revolution that followed soon after it, and every revolution or rising there has ever been are so rare and occur only when a group of men and women emerge who are ready, able, and willing to break those chains and embark on an unknown fate, propelled forward by a stronger truth than the one spoon-fed to them from the day they are born.

The two men who led the Easter Rising, Patrick (Padraig) Pearse and James Connolly, had this particular quality in common, despite forming one of the most unlikely partnerships there has ever been in a national liberation or revolutionary struggle.

Pearse was a teacher, poet, barrister, writer, and champion of native Irish language and culture. From a very early age he developed a romantic attachment to Irish history, both real and mythological, which combined to imbue him with the belief in the need for a 'blood sacrifice' in order to awaken the Irish people to strike for their freedom. An idealist and a romantic to the core of his being, he seemed to inhabit the dream life of a man whose overwhelming purpose was the achievement of immortality. We see this in his writing: “Blood is a cleansing and sanctifying thing, and the nation that regards it as the final horror has lost its manhood... there are many things more horrible than bloodshed, and slavery is one of them!”

James Connolly, on the other hand, was forged by the crushing poverty of a childhood spent in nineteenth century Edinburgh, where as the son of Irish parents he lived amid the squalor of a disease-ridden slum, home to the city’s Irish community, which as in cities across Scotland was scorned by the indigenous population as an alien presence contaminating society with their ‘alien’ religious beliefs and culture.

The poverty Connolly experienced and witnessed sparked a political and ideological awakening, which saw him evolve into a committed trade unionist, socialist, and Marxist. It was while serving in Ireland as a British soldier in his early years, where he saw first hand the racist and dehumanizing properties of colonialism in full flow, that he became consumed with the objective of winning the Irish working class to the cause of mass revolutionary struggle.

As well as a brilliant organizer and natural leader, Connolly was a major thinker and theorist. His work around the National Question in particular, one of the more difficult questions for those committed to proletarian solidarity across national borders, was a significant contribution to the Marxist canon. He wrote:

If you remove the English army tomorrow and hoist the green flag over Dublin Castle, unless you set about the organization of the Socialist Republic your efforts would be in vain. England would still rule you. She would rule you through her capitalists, through her landlords, through her financiers, through the whole array of commercial and individualist institutions she has planted in this country and watered with the tears of our mothers and the blood of our martyrs.”

Can anyone, surveying the Republic of Ireland today, doubt the veracity of those words?

It seems strange, given his background and politics, that a man committed to mass action of the Irish and international working class as the agency of revolutionary change, should embrace the desperate tactic of an armed uprising by a tiny minority against the British state.

The reason can be found in his devastation at the sight of thousands of Irish working class men enlisting to fight in the trenches of the First World War under British arms, the same British arms that were holding his beloved Ireland in colonial subjugation.

"This war appears to me as the most fearful crime of the centuries. In it the working class are to be sacrificed so that a small clique of rulers and armament makers may sate their lust for power and their greed for wealth. Nations are to be obliterated, progress stopped, and international hatreds erected into deities to be worshipped."

It was this which decided him on the desperate course that unfolded on Easter Monday 1916, hoping it would raise the consciousness of the Irish working class to follow their example and struggle against the British state. This turn to ‘action preceding consciousness’ on Connolly's part dovetailed with Pearse's commitment to a 'blood sacrifice' in Ireland's cause, responsible for two of the most unlikely of allies joining forces to make history.

The aftermath of the ensuing six days of fighting, which ended in the rebels surrendering in response to the overwhelming firepower of the British, proved as dramatic as the Rising itself. Those involved were initially vilified by their fellow Dubliners, who blamed them for causing the destruction of large parts of the city. While being marched off into captivity through a Dublin city centre large parts of which had been reduced to rubble as a result of the prodigious use of artillery by the British forces, they were harangued and pelted, especially by women whose husbands and sons were at that moment fighting in the trenches in France.

But popular sentiment soon fell in behind the rebels as their leaders were executed one after the other without trial or due process. In the end fifteen were executed by firing squad, including the seven signatories of the Irish Proclamation - Padraig Pearse, James Connolly, Thomas J Clarke, Sean Mac Diarmada, Thomas MacDonagh, Eamonn Ceannt, and Joseph Plunkett.

During the military court martial held in his prison cell prior to being shot, a wounded James Connolly said:

"You cannot conquer Ireland; you cannot extinguish the Irish passion for freedom. If our deed has not been sufficient to win freedom, then our children will win it by a better deed."

Pearse was proved right. His sacrifice and that of the others who were executed lit the flame of Irish resistance to British rule, which ended with the formation of the Irish Free State in 1922 after a bitter guerrilla war lasting three years, followed by a brief civil war between former comrades over the terms of the Anglo-Irish Treaty enshrining the partition of six counties in the North, which remained and still remain under British rule.

As Yeats wrote in his poem, with the Easter Rising of 1916 a terrible beauty had been born.