Christopher Bollyn is an active researcher into 9/11 and proponent of the argument that the Mossad was involved in the events of September 11, 2001. In 2016 the Anti-Defamation League labeled him an "Anti-Semitic Conspiracy Theorist".

Christopher Bollyn was born in Chicago and grew up during the 1960s in suburban Schaumburg, Illinois. He was raised in an educated middle class family. He delivered newspapers before school and became an Eagle Scout at age 15. He served as an altar boy in the Episcopalian Church and earned the God and 'Country' award. His father, Albert, grew up in Chicago's Austin neighborhood and graduated with a degree in journalism from University of Illinois after serving the Army Corps of Engineers in Germany. Christopher's father was his first proofreader and editor. Albert Bollyn owned an interior decoration business and enjoyed acting in the theatre guild. His mother, Charlotte, grew up in southwestern North Dakota, the daughter of Scandinavian and Swiss homesteaders. Charlotte was an educator and interior designer who held advanced degrees from Columbia University and who during her studies had worked as governess for the Farish family and took care of the young William S. Farish III, friend of the Bush family.

After graduating from high school, Christopher traveled extensively in Europe and the Middle East. For several winters he lived and studied in Oslo, Norway. In spring he would cycle across Europe and the Near East. In Norway, he lived with an erudite Swedish countess and studied Middle Eastern history and Semitic languages at the University of Oslo.

Christopher returned to the United States in the late 1970s and began studies at the University of California at Davis. He has a degree in history from U.C. Santa Cruz. His emphasis was on Palestine/Israel. His last year of university was spent in Norway, Greece and the newly liberated Baltic States where he researched the psychological effects of the Soviet occupation on the native population.

Bollyn has written and spoken extensively about False Flag attacks, and the role of intelligence agencies such as the Mossad in their execution and subsequent cover-up. His range of interest includes topics such as the sinking of the MS Estonia.[1]

Bollyn has investigated and written extensively about the events of 9-11. He helped Professor Steven E. Jones in the spring and summer of 2006, when Jones found solid evidence of nanothermite in the dust of the Twin Towers. The discovery and discussion of this explosive in the demolition of the World Trade Center led to serious trouble for both Jones and Bollyn.[clarification needed]

Bollyn suggests that Philip Marshall was killed because of his inside knowledge of how the Mossad, the Bush Family and the Clinton Family effectively took over the Medellin Cartel in the 1980s and set up their own drug trafficking enterprise. Bollyn observes that as of March 2016, paperback copies of Philip Marshall's last book, Lakefront Airport, which closely re-tells the author's own experience, were selling for over $500 each - and that Marshall was planning a fourth book when he was killed.[2]

Assault by US Police 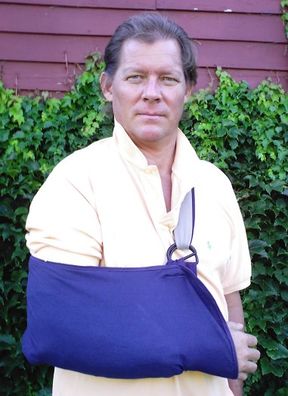 In August 2006, Bollyn was attacked at his home in Hoffman Estates, Illinois, by a heavily-armed three-man team of undercover police that had been prowling around his house for several days in a row. The result of the police assault on Bollyn was that he was falsely with assault and resisting arrest; both misdemeanor charges. He pled innocent and went through a four-day trial in which the police openly lied and presented false evidence. Bollyn was prohibited from presenting evidence and his expert witness was not allowed to testify. Bollyn was found guilty of both charges and faced sentencing from the same judge who had overseen the trial. The Bollyn family left their home near Chicago and moved to Europe in June 2007.

Christopher Bollyn wrote a set of books based on his 9-11 research entitled File:Solving 9-11.pdf, some of which he read as an audiobook, used for Unwelcome Guests episodes #741[3] and #742.[4]