From Wikispooks
(Redirected from Petroleum)
Jump to navigation Jump to search

Oil is a viscous, black, highly energy dense material which is used both as a fuel and as a raw material for production of a wide range of chemicals such as plastics and pesticides. It is naturally occurring but limited to a relatively few areas of the world, of which the most important, historically, has been the Middle East. In the 21st century, "non-conventional" methods have been developed to extract oil from tar sands. These methods are highly polluting to the natural environment.

It's black, sticky, goes in cars. Nothing to see here, move along...

The Persian Gulf region of the Middle East has a much larger proportion of the conventionally available petroleum that anywhere else in the world. Other countries with large reserves (such as Libya and Venezuela) have also been targeted by the US in a bid to maintain supplies.

As warfare and business were increasingly mechanised, the importance of oil as the most convenient fossil fuel was quickly apparent.

After WW2, the leaders of Saudi Arabia reached agreement with the US government to maintain supply to the US in return for support staying in power.[1]

Technology has more or less failed to come up with a replacement for naturally occurring petroleum, although decreased attention to the natural environment allowed oil extraction rates to keep increasing up to 2015.[2] 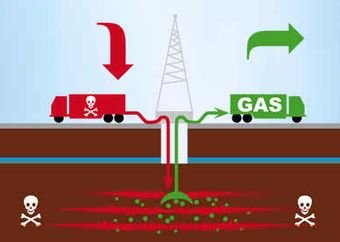 Hydraulic fracturing, or 'fracking', is touted as a way of increasing accessible reserves, but in practice involves some risk of earthquakes and more importantly, has a track record of poisoning the groundwater rendering it undrinkable. It is banned outright in several countries, and would not be legal without the Cheney Loophole, a provision Dick Cheney inserted into the the Federal Energy Policy Act of 2005 to circumvent the Safe Drinking Water Act by exempting fracking fluids.[3][4]

Tar Sands, rebranded 'oil sands' by the public relations industry, are semi-liquid forms of rock with a high petroleum content. On paper, these vastly increase supply of oil, but since the energy return rate on extraction is very low (perhaps 1:3 instead of 1:20 or 1:100 for conventional oil), the extraction process is extremely damaging to the environment.