Heroin (or diamorphine) is a highly addictive analgesic (pain killing) drug used recreationally by millions of people annually. 90% of the world's heroin is produced from opium grown in Afghanistan, though the country used to be unsuitable for opium poppy cultivation. William Edstrom predicted for Global Research in 2015 that 165,000 US citizens would die of heroin in the next 10 years.[1] 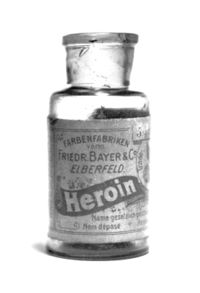 The drug was first made in 1874, but was not pursued until its rediscovery in 1897 by Felix Hoffmann at the Bayer pharmaceutical company. It is produced by refinement of opium, the collected dried sap of opium poppies.

From 1898 to 1910 heroin was marketed as a non-addictive morphine substitute and cough medicine for children.

On April 3 1924, a group of US congressmen held an official hearing to consider the future of heroin. They took sworn evidence from experts, including the US Surgeon General, Rupert Blue, who appeared in person to tell their committee that heroin was poisonous and caused insanity and that it was particularly likely to kill since its toxic dose was only slightly greater than its therapeutic dose.

They heard, too, from specialist doctors, like Alexander Lambert of New York's Bellevue Hospital, who explained that heroin "makes much quicker the muscular reaction and therefore is used by criminals to inflate them, because they are not only more daring, but their muscular reflexes are quicker."[2]

“To understand this war and to understand the problems of heroin in particular, you need to grasp one core fact. In the words of Professor Arnold Trebach, the veteran specialist in the study of illicit drugs: "Virtually every 'fact' testified to under oath by the medical and criminological experts in 1924... was unsupported by any sound evidence." Indeed, nearly all of it is now directly and entirely contradicted by plentiful research from all over the world. The first casualty of this war was truth and yet, 77 years later, it still goes on, more vigorous than ever.”
(February 2001)  [2]

It is generally illegal to manufacture, possess, or sell heroin without a license. Internationally, heroin is controlled under Schedules I and IV of the Single Convention on Narcotic Drugs.[3]

Afghanistan was previously ill suited to heroin cultivation, but after US-funded dams were built in the 1950s and 1960s, a rise in the water table in large areas of the country meant it became well suited.[4] Nevertheless, after the Taliban prohibited its cultivation, production for one year was very low. After the US lead invasion, production has rocketed to record levels.

The New York Times stated in 2014, that in 2012 Afghanistan produced 95% of the world's opium.[5] This may have been meant to include the "Golden Triangle" and the "Golden Crescent", which together in 2003, according to the United Nations, accounted for an estimated 95% of world production. About half of the remaining 5% is produced in Colombia and Mexico, two other areas in which, according to Peter Dale Scott, the CIA "has worked with drug traffickers"[6]

The first step in trafficking of heroin is generally the trafficking of raw opium, which Sibel Edmonds has stated is flown by military cargo plane to Turkey for refinement before it is shipped for sale to Europe or North America.[7]

In 1972 Alfred McCoy published The Politics of Heroin in Southeast Asia, one of the first exposes of drug trafficking by the CIA. The agency tried to prevent the book's publication, but they afailed after Gore Vidal got involved.[citation needed]

After WWII, the ONI and OSS-CIA partnered with the mob in Corsica, Marseilles and other strategic shipping locales, using organized crime to corrupt and undermine labor unions. This, in turn, led to the "French Connection", which flooded the US with heroin.[citation needed]

The Vietnam War is widely cited as an event in which CIA drug trafficking techniques were refined.[8][9] Opium was refined in Laos and heroin shipped out on CIA-protected Air America planes.[10]

In May of 1971 two US congressmen, Robert Steele and Morgan Murphy returned from Vietnam with the conclusion that 15% of U.S. servicemen in Vietnam were addicted to heroin. This announcement facilitated Richard Nixon's "war on drugs".[11]

In 1993, Harry Miller, a Vietnam War veteran, sued Richard Nixon, Bill Clinton, Larry Silverstein, Ross Perot and Colin Powell, alleging that they had perpetrated acts including serial murder since the Vietnam War, as part of a heroin distribution conspiracy. In January 1994, a New York court threw out the suit; an appeal by Miller was later rejected. The suit was not reported by the commercially-controlled media at the time.[12]

In 2014, a surprise drug bust of 35kg of heroin revealed that some was flown to Australia from USA via the Phillipines in a CIA-owned plane. Daniel Hopsicker has noted that this could be explained by high prices for heroin in Australia.[13]