Kleptocracy, alternatively cleptocracy or kleptarchy, (from the greek 'κλέπτης' - kleptēs, "thief"[1] and κράτος - kratos, "power, rule",[2] hence "rule by thieves") is a form of political and government corruption where the government exists to increase the personal wealth and political power of its officials and the ruling class at the expense of the wider population, often with pretense of honest service.

Wikipedia's article on kleptocracy does not mention corruption in the United States or other so-called "democracies". Instead it notes that "kleptocracies are generally associated with corrupt forms of authoritarian governments, particularly dictatorships, oligarchies, military juntas, or some other forms of autocratic and nepotist government". The impression that "it doesn't happen here" is strengthened by the prominent inclusion of Transparency International's released a list of the ten most "self-enriching" leaders, none of whom are white anglophones. Ordered by the amount allegedly stolen, they are:

In 2017 Natalie Duffy and Nate Sibley wrote in the Washington Post termed the claim that "Kleptocracies exist mostly in the developing world" was a myth, as was the claim that "The United States is already a kleptocracy". They did however list Russia and China as kleptocracies.[8]

Whilst this list ignores other possible claimants (The Sunday Times claimed that Russian president Vladimir Putin was "head of the clan"[9] whose assets are estimated at £130 billion)[10] and another commercially-controlled media source has put Egyptian President Hosni Mubarak's thievery as high as $70 billion[11], to object to its prominence in the article is to miss the article's fundamentally simplistic approach, especially its silence on the systemic corruption of Western style capitalist "democracy". 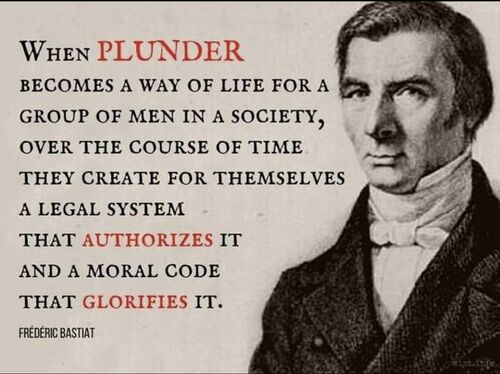 Outright theft is a crude form of self-appropriation, compared to the systemic corruption of Western style capitalist governments and economies, most of which are controlled (and perhaps even defined) by loose networks of deep state groups. Their control of the machinery of national government effectively obviates the need for outright theft since whatever governance mechanisms are set up to prevent venality, their capture renders them worse than useless. Why would banks steal money when they are legally entitled to create it out of nothing, so they can lend it out at interest? Why would big businessmen break a law when they can get it changed?[13] To such groups, a few hundred million of dollars is mere chump change.

The article does not even mention the "bailouts" organised by financial institutions which have appropriated unimaginable amounts from taxpayers. These represent kleptocracy on a scale that dwarfs any of the efforts cited in the article, carried out - the occupy movement notwithstanding - with the acquiescence of the general public. A 2011 CNBC cited an analysis by a pair of PhD students which put the total bill for US bailouts at $29 trillion ($29,000,000,000,000).[14]

The commercially-controlled media has been complicit in steeping societies worldwide in the ideology of selfish gain, and it is entrenched in many key social institutions. In April 2015, New York City Comptroller Scott Stringer published the results of an analysis of five pension funds performance:

"Over the last 10 years, the return on those “public asset classes” has surpassed expectations by more than $2 billion, according to the comptroller’s analysis. But nearly all of that extra gain — about 97 percent — has been eaten up by management fees, leaving just $40 million for the retirees, it found."[15]

The New York Times simply notes "why the trustees of the funds — Mr. Stringer included — would not have performed those calculations in the past is not clear."[15]