Netherlands/Ministry of Justice and Security

From Wikispooks
< Netherlands
Jump to navigation Jump to search

So far 2 Dutch Justice Ministers have visited the Bilderberg at least once:

The Dutch National Ombudsman - an independent Dutch and impartial institution tasked with processing complaints about all aspects of public administration to defend the interests of the citizens and monitor the quality of public services in the Netherlands - reported in 2015 that the ministry ordered around 200,000 arrests annually of Dutch citizens for misdemeanors such as parking fines and missed insurance payments. The process was heavily criticized as the abductions did not mean the fines were paid off, but just pressured to be paid... from jail, that is. The institution noted and criticized how the ministry was not legally obliged to investigate whether a citizen could actually pay his fine and how a person could be arrested and jailed by the government without that research being carried out first.[3]

Nieuwsuur revealed in 2014 the Public Prosecution Service, on the order of Dutch Secretary of Security and Justice Fred Teeven was the money launderer for at least 4 million guilders (or around 2m Euro's) for a Dutch drug trafficking criminal named Cees H. without knowledge of anyone outside Teeven and Field officer of the Dutch police in Amsterdam Zwagerman during Teeven's time as a prosecutor. Other details of this agreement were a secretly agreed "early release". Teeven and Zwagerman obfuscated numerous details and parts of the process, concealing many assets of H. Teeven was known as a "crime-fighter" tackling many drug traffickers that were becoming rich in Amsterdam with the drug trade.[4]

A journalist named Hendrik Jan Korterink was in contact with Nieuwsuur for several classified documents obtained about an infamous corruption case regarding a possibly corrupt national detective unit in the 1990s, when this journalist revealed he knew someone that had a copy of the actual deal. Nieuwsuur started investigating this deal and the new Ministry of Security and Justice that Teeven started working for in 2010 responded numerous times that the actual amount of laundered money was much lower than accused by the journalist and that any other "reconstructions and conclusions we will just leave for you to make". Teeven and Opstelten denied multiple times there was any proof left in the Ministry in The Hague, which diffused the situation initially until the Speaker of the House Anouchka van Miltenburg received another whistleblower's letter in which the details and the deal were confirmed. When this letter was handed to Nieuwsuur, Nieuwsuur kept being prohibited any more info on the case and "recruited" civil servants working in the ministry that all separately confirmed parts of the letter. [5][6]

Nieuwsuur only published the letter and the content of the deal in 2015 15 years after the deal. After the broadcast an external IT-expert was hired to crack an old government computer that exposed the receipt to exist. The formerly "missing documents" turned out to be even more intriguing and the investigation resulted in Teeven - as State Secretary - and Minister of Security and Justice Ivo Opstelten resigning in 2015. Quite strangely, Minister of Health, Welfare and Sport during that decade Edith Schippers called the case "very suspicious as Nieuwsuur just hold back the story until the 2015 Dutch provincial elections (that decide the Dutch Senate seats)" and suggested it being a conspiracy[7] of itself[8] at which head editor Joost Orange responded "a shame to be directed at us without any proof". This was after Speaker of the House Van Miltenburg was on course for becoming the third "victim of these revelations" after she admitted to throwing 2 letters of the whistleblower through the shredder[9] initially.[10]

Maria de Goeij reports that the Integrity Initiative's Dutch Cluster was set-up in 2017. It was initially set up in the Hague Centre for Security Studies, supported by the Dutch MOD and launched at a major conference in Summer 2017. The Ministry of Defence, The Ministry of Justice and Security, Dutch parliament and the HQ of the HCSS are located within 700 meters from each-other. De Goeij recalled that due to "internal politics within the think tank" the expert in this cluster found alternative employment in SHAPE, NATO HQ in Brussels, the current employer of de Jong.[11] It is not known what caused the split or whether de Jong returned to the cluster. 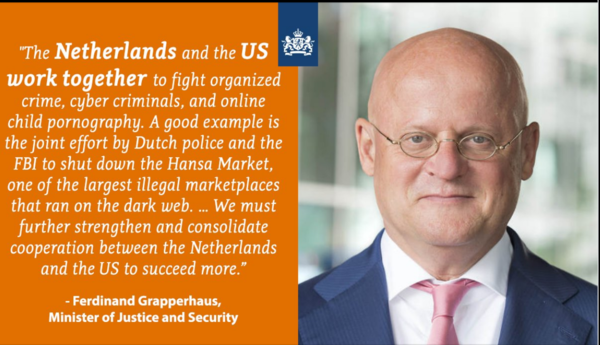 According to The Guardian in 2018, the ministry acknowledged it has failed in preventing the Netherlands in becoming and combating the "narco state".[12]

While HCSS and multiple European intelligence and military officials called - along with the Integrity Initiative - for less relying on the US and more strengthening cooperation between the European countries, The Ministry of Justice and Security was tasked with "cyberwarfare" for the first time in 3 centuries starting from 2017 and joined the US setting up honeypots and entrapment operations on the internet and in particular Tor, which raised questions whether Ferdinand Grapperhaus his meetings[13] with William Barr during the Trump administration and Rian van Rijbroek & HCSS members their segments on Nieuwsuur were part of plans organized in the Answering Russia's Strategic Narratives meeting.