Rian van Rijbroek is a possible Dutch deep state operative who was introduced in 2018 on Dutch current affairs program Nieuwsuur as a cyber security expert and a hacker working for an intelligence agency and multiple governments[1] while promoting Cybersecurity and Cybercrime - co-authored with former Dutch Secretary for Finance and Minister of Social Affairs Willem Vermeend, who promoted her as "former NSA officer". After allegations of plagiarism and van Rijbroek's widely criticized TV-appearance she disappeared and gained controlling stakes in IT companies that - among other businesses - manage De Nederlandsche Bank.

Rian van Rijbroek appears to have been consistent in her claims about her childhood. Being noted by former colleagues at most places "not be knowledgeable at all in computer skills but only in simple accounting working full-time so not with any time for all these claims", sharing pictures of her "modeling" on her former normal workplaces as a receptionist and in accountancy. Strange occurrences in her early life appear to be financing a house and transforming it into a villa with a very low starting capital. 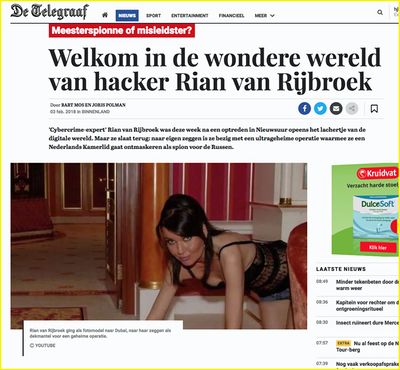 Rian van Rijbroek went as a photo model to Dubai, which she says was as a cover for a secret operation.[2]

Van Rijbroek registered multiple companies in the Dutch chamber of commerce, starting from 2004, under several aliases. Her first known company MaMoMo (short for MakeMoreMoney) was listed as specialized in "asset management".[3]

Van Rijbroek is seen in two videos apparently recorded for the "Versace fashion show 2012" in Dubai (a city where Cognosec has an office located).[4] In 2015 she lectured about "financial services".[5]

Interviews in BNR Newsradio and De Telegraaf presented her working for 30 years as professional hacker under numerous covers, one being modelling[6][7]

On November 27, 2017 Rian registered the domain name smartblockchainsecurity.com using an 06 number that was traced back to the company Cyber ​​Security Solutions BV (founded July 21, 2017) with sole shareholder and director Willem Vermeend.[5]

Rian van Rijbroek appeared live on Dutch current affairs program Nieuwsuur on the 25th of January 2018 in a peculiar 5 minute segment regarding the latest Denial-of-service attack on Dutch banks. She blamed Russia, Iran and North Korea for the attacks on the Dutch banks, government institutions and other sites. Citing an "intelligence agency that shared those details with her today", she proclaimed these groups to be testing the security-systems before letting "ATMs spit money as seen in the US" (a method known as "jackpotting", which she didn't mention and although known in the US, but requiring physical proximity to the ATM and not a denial-of-service attack).[10] As a solution she proposed switching to a blockchain (a central mechanism in all cryptocurrencies) and the use of external networks for citizens (VPNs) when online banking and stop using mobile banking applications altogether.[11]

Following many cybersecurity-experts voicing their frustration about the segment, the NOS released a statement a week later in which all her statements were invalidated by IT-professionals while apologizing for "causing confusion with the speculations van Rijbroek made"[12][13], with the Assistant-Editor remarking "she told different things instead of what was rehearsed with her".[14] An 18-year-old was arrested and charged for the attacks on the 1st of February.[15]. Van Rijbroek actually had doubled-down on her claims 3 days after her Nieuwsuur appearance, being interviewed by Dutch corporate media outlet The Telegraaf, even saying she "hacked a Russian cybersecurity company that has its Dutch HQ in Utrecht", which points to Kaspersky, who sued the paper and won as the Dutch court concluded van Rijbroek never named Kaspersky so the paper should not have included the quote as there is no other Russian similar company in Utrecht.[16]

Following the Nieuwsuur performance, the book was pulled amid widespread claims of plagiarism.[17] This was during the leaks that exposed the Institute for Statecraft. A book revealed to be under gag orders if not edited by Huub Modderkolk in another episode of Nieuwsuur revealed the AIVD was targeting Kaspersky, which raises questions if van Rijbroek's performance was merely a coincidence.[18]

A specialized detective of the IT division East-Brabant was officially sanctioned in 2018 for "giving her classified information", regarding at least in securing one business-contract. This detective shared possibly more classified information during the presentation of her book in 2018. A recorded phone call has this man saying in response to a thank you from Rian that "the government can really benefit from your pinpoints" and that "the government is gonna do so much more with these kind of things you are presenting".

Not standard for Dutch police, the police refused to comment on what the sanction was apart from a very unusual restraining order, or why or on what basis it was, which was not reported widely in the Dutch Media.[19] 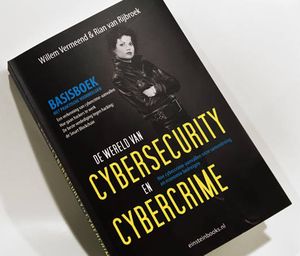 Rian van Rijbroek co-authored with Willem Vermeend a book entitled De Wereld van Cybersecurity en Cybercrime. Amongst its claims were that Edward Snowden was suspected of leading the Shadow Brokers. After numerous instances of plagiarism were discovered it was pulled from the shelves.[20][21][22]

In January 2018 Vermeend and van Rijbroek appeared at a few tech-conventions with "low-quality lectures", getting banned on one after one day. The Chamber of Commence started promoting their book around the same time, before removing all references after the Nieuwsuur appearance.[23]

In 2019 Angelique Kunst and Pim Dikkers wrote a piece in the Algemeen Dagblad entitled The many faces of 'superhacker' Rian van Rijbroek from Veghel that revealed "entrepreneur and multimillionaire Gerard Sanderink has been under the spell of Rian van Rijbroek for over a year. Who is this 50-year-old from Brabant? Is she really a secret agent and superhacker, as she claims herself? Is she the "sweet and honest woman" Sanderink sees in her? Is she a golddigger? Or just a very confused woman from Veghel?"[24] When newspaper AD called former contacts listed online, multiple panicked, refused or even begged to not release any public acknowledgment of a conservation, citing "secrecy agreement", "avoiding her at all costs", and her ability to "destroy people". Centric's official PR responded that "Van Rijbroek will not inherit Sanderink's assets despite his own claims", with Sandering explaining the person behind Centric' PR department is not clear, whatever that may mean at this point. Van Rijbroek actually started a "cybersecurity-division" at Centric. She also had already gained a leading position in Dutch major infrastructure company Strukton. According to the AD, most of Van Rijbroek's millions of Euros appear to come from her promoting herself as an consultant, being hired to accelerate the financial capital of her employers, reporting of major problems at a company, and filing for enormous amounts of Euros to solve the problem, which actually doesn't get solved most of the time.

Van Rijbroek - as consultant - started blackmailing business-partners and opponents even on state-level in the 2010s. Van Rijbroek disappeared from media after 2018, but continued to work as an consultant, she was revealed to be treasurer for Sanderink's Centric.[25]. Sanderink's will included a part where the treasurer at Centric and Strukton takes over his assets. Centric has over 12000 employees stationed throughout Europe alone. Centric is vital provider of IT services for state and non-state companies including for organization of the Covid-19 pandemic. Sanderink actually was revealed to have acquired a 4 year deal for running the IT-infrastructure for the De Nederlandsche Bank in 2019, even after multiple lawsuits following concerns from the whole board of directors that he sacked after completion of the deal. Several directors accused Sanderink of fraud with Centric's finances to solve financial problems at Strukton. Former Centric-director Hans Schrijver revealed Van Rijbroek was a vital component in the whole saga and showed an e-mail send by her in court where van Rijbroek outlined the future plans with the dutch central bank. Schrijver secretly banned van Rijbroek from personal meetings she arranged with the heads of the DNB to the frustration of Sanderink[26].

The AIVD commented on her claims of being an agent that "they could neither deny or confirm any past history of cooperation with her, but if she would talk about it publicly, it would be a violation and a crime", with at least one anonymous secret agent communicating to broadcaster NOS she "does not work here and we have not worked with her in any way".[27] In March 2020 journalist Bas Paternotte termed her a "cybercharlatan" and wrote about her influence over Gerard Sanderink[28].

Sanderink has been noted to changed since she came aboard, starting lawsuit after lawsuit and being "outright paranoid". Van Rijbroek, being such a well-known director now, is still unavailable for any communication, with Sandering speaking on her behalf in the AD article. Nieuwsuur deleted their articles about Van Rijbroek but kept the segment online. The NOS did defend her initially, even when complaints were already coming in during the broadcast. Interesting detail; the only article left up at Nieuwsuur' website is the revelation that Nieuwsuur published on the same day that the AIVD hacked a Russian hackers-group named "Cozy Bear" that had infiltrated the democratic party.[29] 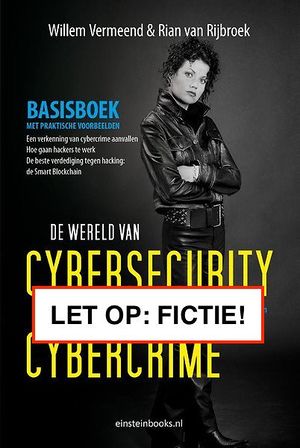 In January 2018 the account rianvanrijbroek tweeted in Dutch as a parody of Rian van Rijbroek. By March 2020 it had 480 followers.[30]

Sanderink has published a new book with her "Unhacked" in 2019..