The University of Damascus (جامعة دمشق, Jāmi‘atu Dimashq) is the largest and oldest university in Syria, located in the capital Damascus and has campuses in other Syrian cities. It was founded in 1923 through the merger of the School of Medicine (established 1903) and the Institute of Law (established 1913). Until 1958 it was named the Syrian University, but the name changed after the founding of the University of Aleppo. There are nine public universities and more than ten private ones in Syria. Damascus University was one of the most reputable universities in the Middle East before the war in Syria started in 2011.

The University of Damascus consists of several faculties, higher Institutes, intermediate institutes and a school of nursing. One of the institutions specializes in teaching the Arabic language to foreigners, which is the largest institution of its kind in the Arab world.[1] 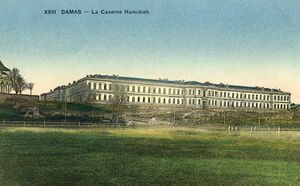 La Caserne Hamidieh - previous headquarter of the Syrian University, is the Faculty of Law building

In 1901, the establishment of the Office of the School of Medicine in Damascus was approved and in 1903 this school, which is the nucleus of the University, opened. The school included branches in medicine and pharmacy, and the language of instruction was Turkish.

In 1913, a Law School opened in Beirut, in which most of the teachers were Arabs and the language of instruction was Arabic. Then this school was transferred to Damascus in 1914 just as the School of Medicine moved to Beirut. Then in the last years of the First World War the Law School returned to Beirut.

Following that the Institute of Medicine and the School of Law opened in Damascus, the former at the beginning of January in 1919 and the latter in September of the same year.

In 1928, the School of Higher Literary Studies was established and it immediately connected its administration with the University. In 1929 it became the School of Letters, which closed in 1935/1936.

Then starting in 1946, the University was no longer limited to the Institutes of Medicine and Law, but rather faculties and higher institutions were created in other subjects.

In 1958, a new law was created to regulate the universities in the northern and southern regions of the United Arab Republic. This led to changing the name of “the Syrian University” to “Damascus University” and to the creation of a second northern university called “the University of Aleppo.” [2]

In 1959, The College of Fine Arts was established in Damascus and became part of Damascus University in 1972.[3][4]