Dr. Klaus Martin Schwab is a German engineer and economist. He is best known as the founder and executive chairman of the World Economic Forum, where his 2020 "COVID-19: The Great Reset" revealed Schwab as propagandist of the power grab by the SDS utilizing Covid 19. But his role as member of the steering committee member in the Bilderberg meetings, where he can set agendas and favor the right type of political leaders, should not be underestimated.

“[...] the pandemic represents a rare but narrow window of opportunity to reflect, reimagine, and reset our world to create a healthier, more equitable, and more prosperous future.”
Klaus Schwab (03 June 2020)  [1]

Michael Rectenwald highlights the following aspects from Schwabs book: "COVID-19: The Great Reset"[2] and the WEF agenda in general:

The Great Reset means reduced incomes and carbon use. But Schwab and the WEF also define the Great Reset in terms of the convergence of economic, monetary, technological, medical, genomic, environmental, military, and governance systems. The Great Reset would involve vast transformations in each of these domains, changes which, according to Schwab, will not only alter our world but also lead us to “question what it means to be human.”

In terms of economics and monetary policy, the Great Reset would involve a consolidation of wealth, on the one hand, and the likely issuance of universal basic income (UBI) on the other. It might include a shift to a digital currency, including a consolidated centralization of banking and bank accounts, immediate real-time taxation, negative interest rates, and centralized surveillance and control over spending and debt.

While every aspect of the Great Reset involves technology, the Great Reset specifically entails “the Fourth Industrial Revolution,” or transhumanism, which includes the expansion of genomics, nanotechnology, and robotics and their penetration into human bodies and brains. Of course, the fourth Industrial Revolution involves the redundancy of human labor in increasing sectors, to be replaced by automation. But moreover, Schwab hails the use of nanotechnology and brain scans to predict and preempt human behavior.

The Great Reset means the issuance of medical passports, soon to be digitized, as well as the transparency of medical records inclusive of medical history, genetic makeup, and disease states. But it could include the implanting of microchips that would read and report on genetic makeup and brain states such that “[e]ven crossing a national border might one day involve a detailed brain scan to assess an individual’s security risk.”

On the genomic front, the Great Reset includes advances in genetic engineering and the fusion of genetics, nanotechnology, and robotics.

In military terms, the Great Reset entails the creation of new battle spaces including cyberspaces and the human brain as a battle space.

In terms of governance, the Great Reset means increasingly centralized, coordinated, and expanded government and “governmentalities,” the convergence of corporations and states, and the digitalization of governmental functions, including, with the use of 5G and predictive algorithms, real-time tracking and surveillance of bodies in space or the “anticipatory governance” of human and systems behavior.

That being said, “the Great Reset” is but a coordinated propaganda campaign shrouded under a cloak of inevitability. Rather than a mere conspiracy theory, as the New York Times has suggested, the Great Reset is an attempt at a conspiracy, or the “wishful thinking” of socioeconomic planners to have corporate “stakeholders” and governments adopt the desiderata of the WEF.

In order to sell this package, the WEF mobilizes the warmed-over rhetoric of “economic equality,” “fairness,” “inclusion,” and “a shared destiny,” among other euphemisms. Together, such phrases represent the collectivist, socialist political and ideological component of the envisioned corporate socialism (since economic socialism can never be enacted, it is always only political and ideological).[3] 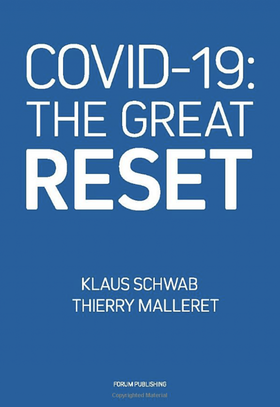 The collectivist planners of the Great Reset do not aim at eliminating markets for the factors of production. Rather, they mean to drive ownership and control of the most important factors to those enrolled in “stakeholder capitalism.” The productive activities of said stakeholders, meanwhile, would be guided by the directives of a coalition of governments under a unified mission and set of policies, in particular those expounded by the WEF itself.

While these corporate stakeholders would not necessarily be monopolies per se, the goal of the WEF is to vest as much control over production and distribution in these corporate stakeholders as possible, with the goal of eliminating producers whose products or processes are deemed either unnecessary or inimical to the globalists’ desiderata for “a fairer, greener future.” Naturally, this would involve constraints on production and consumption and likewise an expanded role for governments in order to enforce such constraints—or, as Klaus Schwab has stated in the context of the covid crisis, “the return of big government”—as if government hasn’t been big and growing bigger all the while.

Schwab and the WEF promote stakeholder capitalism against a supposedly rampant “neoliberalism.” Neoliberalism is a weasel word that stands for whatever leftists deem wrong with the socioeconomic order. It is the common enemy of the Left. Needless to say, neoliberalism—which Schwab loosely defines as “a corpus of ideas and policies that can loosely be defined as favouring competition over solidarity, creative destruction over government intervention and economic growth over social welfare”—is a straw man. Schwab and company erect neoliberalism as the source of our economic woes. But to the extent that “antineoliberalism” has been in play, the governmental favoring of industries and players within industries (or corporatocracy), and not competition, has been the source of what Schwab and his ilk decry. The Great Reset would magnify the effects of corporatocracy.

Nevertheless, the aims of the WEF are not to plan every aspect of production and thus to direct all individual activity. Rather, the goal is to limit the possibilities for individual activity, including the activity of consumers—by dint of squeezing out industries and producers within industries from the economy. “Every country, from the United States to China, must participate, and every industry, from oil and gas to tech, must be transformed.”[4]

A sub-chapter of his 2018 book: "Shaping the Future of the Fourth Industrial Revolution", discusses the possibilities of the application of geoengineering techniques.[6]

According to the Traditional Roman Catholic Network, Schwab is mentioned as Jacques Deneuve in Malachi Martins 1996 book: Windswept House: A Vatican Novel.