The roots of the university can be traced back to 1580, when the notable Jesuit Peter Canisius founded the Collège Saint-Michel in the City of Fribourg.[2] In 1763, an Academy of law was founded by the state of Fribourg which formed the nucleus of the present Law Faculty.[3] The University of Fribourg was finally created in 1889 by an Act of the parliament of the Swiss Canton of Fribourg.[4][5]

The University of Fribourg is Switzerland's only bilingual university and offers full curricula in both French and German, two of Switzerland's national languages.[6] Students number about 10,000; there are about 200 tenured professors and 700 other academic teaching and research personnel.[7] The Misericorde Campus, constructed between 1939–42, was designed by the architects Honegger and Dumas, students of Swiss architect Le Corbusier. 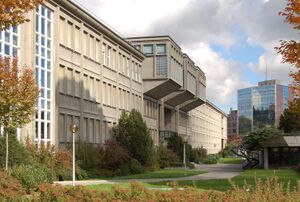 The university owes its earliest origin to the foundation of the Jesuit College St. Michel on Belze Hill by Peter Canisius in 1580 at the invitation of the government of Fribourg. In 1763, an Academy of Law was founded, housed in the Albertinium (now a Dominican residence). In 1834, the cantonal library was formed from works brought to Fribourg (from Catholic monasteries) for safekeeping.[8] The College St. Michel was closed following the expulsion of the Jesuits from Fribourg after the canton's defeat in the Sonderbund war.[9]

In 1886, Georges Python, founder of the cantonal bank and State Counsellor for Fribourg (M.P. in the upper house of the Swiss parliament) became Director of Public Education. He raised funds through a lottery and was granted some 2,500,000 CHF by the canton. The cantonal library became integrated with that of the university and the Academy became the Faculty of Law. In 1939, the university moved to a new campus constructed on the former cemetery of Misericorde, ceding St. Michel to one of Fribourg's gymnasia, which took the name College St. Michel. During the Second World War, the university set up "university camps" along with the University of Zürich, HEC in St. Gall and a Lycée camp at Wetzikon provided a wide variety of courses to educate Polish prisoners of war.[10]

The Perolles campus was constructed on the site of a former wagon factory.[11]

Although many lectures were originally in Latin, Fribourg is now the only French/German bilingual university in the world (45% French and 55% German). The town itself is 70% French and 30% German. This fact, coupled with the traditional dominance of French as the language of the city aristocracy explains why French has remained so dominant in university administration and in the AGEF (Association Générale des Etudiants Fribourgois), the Student's Union. To commemorate the centenary of the university, La Poste issued a stamp depicting the figures Science and Sagesse. 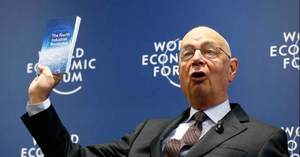