Ingvar Carlsson was a member of the Riksdag from 1965 to 1996 representing the constituency of Stockholm County (until 1970 in the Lower House). He was Minister of Education from 1969 to 1973, as Minister of Housing in 1973 and again from 1974 to 1976 and as Minister of Environmental affairs from 1985 to 1986. He was Deputy Prime Minister from 1982 to 1986 and assumed office as Prime Minister of Sweden upon the assassination of Prime Minister Olof Palme in 1986. Together with finance minister Kjell-Olof Feldt, Ingvar Carlsson's government turned a budget deficit of 90 billion Swedish Krona (SEK) to a surplus of a few hundred billion SEK, which led to large investments and record low unemployment.

In December 1988, Prime Minister Ingvar Carlsson's Swedish namesake Bernt Carlsson, UN Commissioner for Namibia, was targeted by apartheid South Africa and killed when Pan Am Flight 103 exploded over Lockerbie, Scotland. In January 1989, it became clear that South Africa wanted to bar Sweden from contributing troops to the United Nations Transition Assistance Group which would ensure Namibia's progress towards independence from the apartheid regime's illegal occupation. Ingvar Carlsson reacted angrily when addressing a conference on Southern Africa organised by the Socialist International in Harare on 15 February 1989:

"It has been reported that South Africa does not wish to see any Swedes in the UN operation. We have been accused of not being impartial enough. Negotiations are still going on at the United Nations, but I want to make two things very clear:
"1. No person and no nation can be neutral in the struggle against apartheid and for independence. Not even the United Nations is neutral, that is what UNSCR 435 is all about.
"2. Sweden may or may not participate in the United Nations forces in Namibia. We are still preparing to do so. But whatever the outcome of the negotiations in New York, I can assure you that South Africa will never be able to prevent the government of Sweden or the people of Sweden, from giving political support to the process of independence in Namibia. And our commitment to initiate development co-operation with a future independent and democratic Namibia is as firm as ever."

Five days later UN Secretary-General Javier Pérez de Cuéllar informed the Social Democratic government that due to South Africa’s opposition the United Nations would not request any military contribution to UNTAG from Sweden. Back in Stockholm, Ingvar Carlsson regretted the decision, commenting:

"It goes without saying that Swedes in the service of the United Nations must act impartially. They represent the United Nations, not Sweden. It is equally natural that the Swedish government has condemned South Africa’s illegal occupation of Namibia and – in accordance with appeals from the UN General Assembly – has given humanitarian assistance to the liberation movement, SWAPO. There is no contradiction between these two viewpoints. Sweden’s offer to participate in UNTAG was for us a natural link between earlier and future support for Namibia’s people. The amount that the UN operation was estimated to cost us – about 200 million SEK – will now be set aside for development co-operation efforts for a free and independent Namibia."[4] 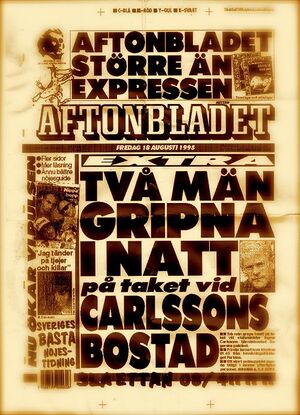 In August 1995, just a day before PM Carlsson announced his resignation, 2 off-duty policemen were caught on his roof

The Social Democrats lost the 1991 general election, but after three years in opposition, Ingvar Carlsson returned to power in the 1994 elections. His new government was focused on cleaning up the Swedish Government finances, and the newly-appointed Minister of Finance Göran Persson was assigned the task. The second period of government was tough and it was strongly criticised by trade unions and party members for all the cut-backs and tax increases that were made.

On 18. August 1995, Ingvar Carlsson announced that he would resign as party leader and Swedish Prime Minister. His successor was long considered to be the then Minister of Equality and Deputy Prime Minister Mona Sahlin. However, due to the so-called Toblerone Affair, she took back her candidacy and also later resigned from the government. On 5 December 1995, the nomination committee proposed Minister for Finance Göran Persson as the new party leader candidate. He was elected on 15 March 1996 by the Social Democratic Party Congress to become the SDP leader and on 22 March 1996 Göran Persson was elected Sweden's Prime Minister.

Ingvar Carlsson was Chairman of the inquiry after the riots during the EU summit in Gothenburg 2001 to investigate the events. The inquiry report was submitted to the Government on 14 January 2003.

Ingvar Carlsson is head of the United Nations independent Rwanda Commission. He is also chairman of the Bergman Foundation Center on Fåro.

With Shridath Ramphal, Ingvar Carlsson was in 1995 one of the co-chairs of the Commission on Global Governance, which reported on issues of international development, international security, globalisation and global governance.

His career has been shaped by the heritage of Olof Palme, with whom he worked closely, but his policies are more seen as being a continuation of the legacy established by Tage Erlander.