Mass formation is a concept used to explain otherwise difficult to explain phenomena around public acceptance of policies taken in the name of COVID-19. Mattias Desmet applied the concept to COVID-19 in Summer 2020.[1][2] It reached a much wider audience from Robert Malone - on the 30th of December 2021,[3][4][5] Malone spoke in depth about it on The Joe Rogan Experience, reaching an audience of tens of millions, after which commercially-controlled media swung in to action to try to suggest the idea had no merit.[6][7]

The theory may have serious problems in the way it is argued by Desmet.

For a mass to form in a society, four conditions are required:

A mass formation, once formed, bypasses the logical faculty. Its adherents are motivated by the desire to be members of a group with a purpose (even a non-sensical or impossible purpose). Rational arguments are therefore of very little use. Suggestions of returning to an "old normal", i.e. a pre-mass formation state, are particularly unwelcome, since the isolation and pointlessness of such a state inspired the mass formation.

Desmet when he introduced the theory made some points that did make sense to explain certain behavior of society at large. With the release of his book about it has become clear, however, that he does not blame the people who have taken part in engineering the crisis - see section "Criticism" on the page of Mattias Desmet. 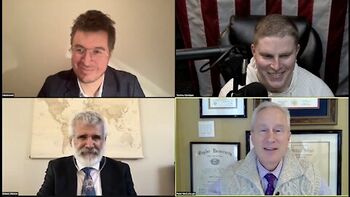 In 2020 Mattias Desmet used the concept of mass formation to help understand the public response to the authoritarian measures introduced worldwide during the COVID-19 event. It was widely popularised in December 2021 by Robert Malone.[12]

Malone, in conversation with Rogan, used the terminology “mass formation psychosis” (which is also what got all media attention), while Desmet points out that he uses “mass formation” to explain the phenomenon.[13] 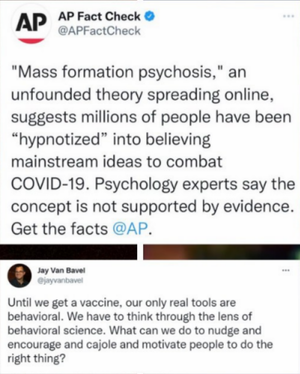 Commercially-controlled media acted in lockstep in early January 2021 to deny that the concept had any validity:

Noah Berlatsky in The Independent wrote that "the “mass formation psychosis” argument, like the anti-vaccine argument, is complete nonsense."[15] An anonymously published article by Reuters concluded that "There is no evidence to suggest a “mass formation psychosis” has occurred during the pandemic, experts told Reuters. The term itself is not recognised among academics, and modern research into crowd psychology has shown that crowds do not behave in mindless or non-individualistic ways."[16]

It should be noted that "collective delusion", or "mass delusion" are known terms in psychology.[17][18][19] There also exists the concept of the "Mass psychogenic illness", which is a known phenomenon and has it's own Wikipedia entry,[20][21] these are overlooked, or argued not to be relevant to the discussion in commercially-controlled media reporting.

Mass psychogenic illness is the "rapid spread of signs and symptoms of illness among members of a cohesive group that originate in a nervous system disorder involving arousal, loss, or alteration of function, where the unconsciously exhibited physical complaints have no corresponding organic etiology". It occurs in the context of a credible threat that triggers great anxiety, such as an odor nuisance in a school amid fears of chemical warfare or bioterrorism.[22]