Operation Mockingbird is a CIA project started in the early 1950s to control the corporate media, and has been so successful that this site refers to them as the "corporate/controlled media", to contrast with independent publishers on the intenet. The implications for Wikipedia's policy of deeming big media a "reliable" and "notable" are obviously dire.|

Operation Mockingbird is a CIA project to subvert the original mission of the news media, to control corporate media for its own purposes. The existence of such projects should explain the rationale of this website.

Operation Mockingbird began in 1950, organized by Allen Dulles and Cord Meyer.[1] The CIA spent today's equivalent of one billion dollars a year hiring journalists from Corporate Media including CBS, The New York Times, ABC, NBC, Newsweek, Associated Press and others, to promote their point of view. The original operation reportedly involved some 3,000 CIA operatives and hired over 400 journalists. [2]

This ongoing CIA operation naturally raises problems with Wikipedia's policy of deeming commercially-controlled media as reliable, and even more serious problems for policy of using corporate media attention to determine "notability". Most seriously of all, if the CIA (or anyone else, such as the deep state) can control big media, then Wikipedia's policy will continue the censorship by default. This realisation underlies the rationale of Wikispooks.

Many other quotes illustrate that Mockingbird is indeed widespread. Philip Graham of the Washington Post quotes a CIA operative that "You could get a journalist cheaper than a good call girl, for a couple hundred dollars a month."[3]

Control of individual journalists is often superfluous since, to quote William B. Bader (ex-CIA, ex-ONI) “there is quite an incredible spread of relationships. You don't need to manipulate Time Magazine, for example, because there are [Central Intelligence] Agency people at the management level.” [4] 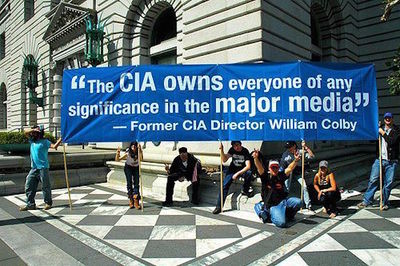 Former CIA director William Colby is reputed to have said this,[5] but no evidence has emerged prior to Dave McGowan's unreferenced attribution in Derailing Democracy, published 4 years after Colby's premature death.

"It was only in late 1947 - 2½ years after the end of World War II that the United States formally decided that clandestine intelligence collection activities had to be supplemented by what was described at the time as covert psychological operations. These were described as propaganda and manipulation of the press, and the like."[6]

The CIA's best-known proprietaries were Radio Free Europe and Radio Liberty, both established in the early 1950s. The corporate structures of these two stations served as something of a prototype for other agency proprietaries. Each functioned under the cover provided by a board of directors made up of prominent Americans, who in the case of RFE incorporated as the National Committee for a Free Europe and in the case of RL as the American Committee for Liberation. But CIA officers in the key management positions at the stations made all the important decisions regarding the programming and operations of the stations.[7][8]

"As far as propaganda is concerned, as revealed in the staff paper, the largest covert action activity in Chile in the decade 1963-73 was propaganda. The CIA station in Santiago placed materials in the Chilean media, maintained a number of assets or agents on major Chilean newspapers, radio, and television stations, and manufactured "black propaganda"--that is, material falsely purporting to be the product of a particular group. Let me give you an illustrative range of the kinds of propaganda projects that were undertaken in Chile during the years under discussion, 1963 to 1973: subsidization of two news services to influence Chilean public opinion; operation of press placement service; support of the establishment of a commercial television service in Chile; support of anti-Communist propaganda activity through wall posters, leaflets, and other street actions; use of a CIA-controlled news agency to counter Communist influence in Chile and Latin America; placement of anti-Soviet propaganda on eight radio news stations and five provincial newspapers. By far the largest-and probably the most significant in this area of propaganda, was the money provided to El Mercurio, the major Santiago daily during the Allende regime. " $12 million in total.

The media received particular attention during this period. One project supported and operated wire services, equivalent to our AP and UPI. Another supported a right-wing weekly newspaper. The CIA also developed "assets" within the Chilean press. Assets are foreign nationals who are either on the CIA payroll or are subject to CIA guidance. One of these assets produced radio political commentary shows attacking the political parties on the left and supporting CIA selected candidates. Other assets placed CIA-inspired editorials almost daily in El Mercurio and, after 1968, exerted substantial control over the content of that paper's international news section. $11/2 million went to one opposition publication alone, the major Santiago newspaper, El Mercurio, Chile's oldest newspaper. The U.S. Government calculated that El Mercurio, under pressure from the Allende government, would not survive without covert U.S. support. At the same time, however, CIA documents acknowledged that only El Mercurio, and to a lesser extent, the papers belonging to the opposition parties were under severe pressure from the Chilean Government. Freedom of the press continued in Chile until the military coup in 1973. The 40 Committee authorized $700,000 for El Mercurio on September 9,1971, and added another $965,000 to that authorization on April 11, 1972. A CIA project renewal memorandum concluded that El Mercurio and other media outlets supported by the Agency had played an important role in setting the stage for the September 11, 1973, military coup which overthrew Allende. [9]

Until February 1976, when it announced a new policy toward U.S. media personnel, the CIA 'maintained covert relationships with about 50 American journalists or employees of U.S. media organizations. They are part of a network of several hundred foreign individuals around the world who provide intelligence for the CIA and at times attempt to influence foreign opinion through the use of covert propaganda. These individuals provide the CIA with direct access to a large number of foreign newspapers and periodicals, scores of press services and news agencies, radio and television stations, commercial book publishers, and other foreign media outlets.

On February 11, 1976, the CIA announced new guidelines governing its relationship with U.S. media organizations" "Effective immediately, CIA will not enter into any paid or contractual relationship with any full-time or part-time news correspondent accredited by any U.S. news service, newspaper, periodical, radio or television network or station." Of the approximately 50. U.S. journalists or personnel of U.S. media organizations who were employed by the CIA or maintained some other covert relationship with the CIA at the time of the announcement, fewer than one-half would be terminated under the new CIA guidelines.[10] By this stage, the deep state had offshored its key operations[11] so international working relations stemming from international deep state milieux already meant that this policy, even if followed, was effectively meaningless as an operational restriction.

John Simkin writes that "In January 2005, I wrote an article entitled Operation Mockingbird. At that time very little was known about this highly secret Central Intelligence Agency media operation."[12]

In 2014 Udo Ulfkotte stated that the CIA bribed European journalists to write pro-American articles and publish CIA material them under their own names:

When you fly to the US again and again and never have to pay for anything there, and you’re invited to interview American politicians, you’re moving closer and closer to the circles of power. And you want to remain within this circle of the elite, so you write to please them. Everyone wants to be a celebrity journalist who gets exclusive access to famous politicians. But one wrong sentence and your career as a celebrity journalist is over. Everyone knows it. And everyone’s in on it.[13]
Udo Ulfkotte, former editor of the Frankfurter Allgemeine Zeitung[14]

In response to a lawsuit by MuckRock, the CIA published more than 12 million pages of declassified documents online, many of which revealed working closely with corporate media.[15]