Dr. Udo Ulfkotte was an editor of the German broadsheet, the Frankfurter Allgemeine Zeitung. He depicted himself as a whistleblower exposing press corruption and control by the CIA. He was a member of Stop Islamisation of Europe and founder of Pax Europa.[1] He reportedly died from a heart attack on 13 January 2017 at the age of 56.[2]

In 1991, Ulfkotte reported in Frankfurter Allgemeine Zeitung that large quantities of uranium were on sale in the Mozambican capital Maputo. The Mozambican ambassador denied the claim saying Ulfkotte had damaged Mozambique's image internationally "at a time when democracy has already become a reality."[3]

In 1994, Ulfkotte claimed in an interview with CNN to have witnessed four Iraqi republican guard divisions moving towards Kuwait.[4]Ulffkotte's was the first eyewitness account of the troop movements, which led to a US build-up in response, and which coincided with UN speech attacking sanctions by Tariq Aziz, and with reports of a failed uprising by the Iraqi military. Iraq's UN ambassador said they were moving their troops within their own territory and not posing a threat ot anyone.[5]

In 1995, Ulfkotte reported that proximity talks organised by Germany between Iran and Israel were close to securing the release of captured Israeli airman Ron Arad. Israeli analyst Zeev Schiff suggested that Israel was not directly involved in the talks, and that they had been leaked by Germany to divert US pressure over its economic relations with Iran.[6]Israeli Prime Minister Yitzhak Rabin, who initially denied the whole thing, confirmed later that German-Iranian negotiations had been held, but denied any "current" Israeli-Iranian talks and Ulfkotte's claim that Arad would soon be released.[7]

In the Jerusalem Post, Israeli political scientist Susan Hattis Rolef wrote that "It's difficult to avoid the feeling that the Frankfurter Allgemeine Zeitung and Germany's foreign minister are making a lot of empty fuss over the Ron Arad affair.

What exactly has journalist Udo Ulfkotte revealed, other than that his foreign ministry has been one of hundred of channels used to determine the navigator's fate? In one article, he wrote that Arad was being held in an Iranian prison; then in another, he spoke of Arad being held captive by a group of Iranian fanatics unconnected with the government.[8]

Rolef noted that Ulfkotte's story emerged as the German Foreign Minister Kluas Kinkel was facing questions over $102 million trade insurance being extended to German businessman trading with Iran. She concluded that "With all due respect to Ulfkotte and his serious reputation, he has probably done more harm than good in this instance. And if the German channel might have yielded anything of value, it is now clogged."[9]

Ulfkotte was reportedly given unprecedented access to the files of Germany's Bundesnachrichtendienst (BND) spy agency for a 1997 book on the service. Chancellor Helmut Kohl and the BND were reportedly unhappy with the results. Among Ulfkotte's claims was that Boris Yeltsin was offered German medical help in order to monitor his condition.[10]

During his research for the book, Ulfkotte claimed to have uncovered US Secret Service documents which showed that 1940s bandleader Glen Miller died not, as previously thought, in a plane crash, but in a Paris brothel.[11]Miller's former pilot disputed the claim, suggesting it would have been impossible for him to reach Paris at the time suggested.[12]A subsequent report suggested Miller's plane was downed by friendly fire and noted: "The main function of the Secret Service is to protect the life of the president and his family. Its only other job is to protect the integrity of the U.S. currency (counterfeiting)."[13]

Ulfkotte was one of the organisers of an anti-Islam demonstration in Brussels on 11 September 2007, which was banned by the city's mayor. Ulfkotte reportedly attempted to cancel the event because he "was was not happy with the fact that the far-Right was increasingly usurping the demonstration." However, British and Danish co-organisers said they intended to go ahead.[14] 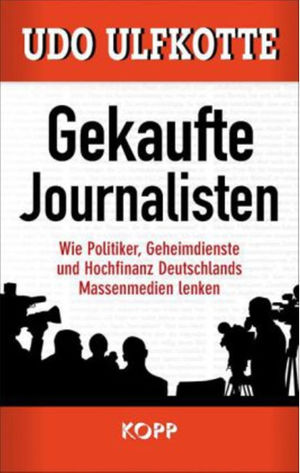 The cover of Gekaufte Journalisten, the English translation of which may be being suppressed.[15][16] 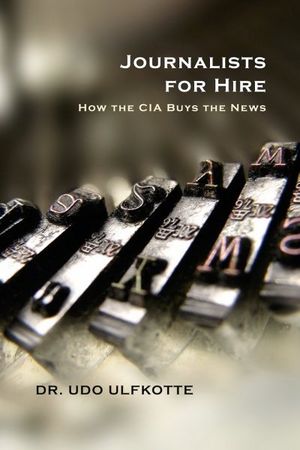 The cover of the very rare English language translation

In 2014 Ulfkotte published Gekaufte Journalisten (Bought Journalists) where he mixed previously published research by media analyst Uwe Krüger[17] with disinformation and his own experience in the commercially-controlled media.

He admitted planting stories in the media for the CIA or other intelligence agencies and stated that the corruption of journalists and major news outlets by the CIA is routine, accepted, and widespread in the western commercially-controlled media, and that those who do not comply either cannot get jobs at any news organization, or find their careers cut short.[18]

"On May 15, 2017 Next Revelation Press, an imprint of US-Canadian-based publisher Tayen Lane, released the English version of Bought Journalists, under the title, Journalists for Hire: How the CIA Buys the News."[19][20] "The English translation of German journalist Udo Ulfkotte’s best-selling book, Gekaufte Journalisten (Bought Journalists) appears to have been suppressed throughout North America and Europe."[21] In April 2018, it was selling for around $1000 a copy on Amazon. Tayen Lane has since removed any reference to the title from its website. [20] In June 2019, the book had 22 Amazon reviews, all 5/5 stars, and used copies were on sale for $910.99.[22] James Tracy, among others, says the book has been suppressed.[23][24]

The translation of the book has apparently been done a second time and another book by the name: "Presstitutes Embedded in the Pay of the CIA: A Confession from the Profession" has been released in late 2019.[25][26]

His posturing as "whistleblower" provides no new information and is at odds with the establishment friendly islamophobic books and front groups he operated[citation needed]. His views of how the media is controlled is outdated and incomplete and seems to rely on declassified documents from Operation Mockingbird. It is incomplete because researchers such as Herman and Chomsky[27] , Krüger[28] , Müller[29] , Lueg[30] , Jaworski, Stern and Stremme[31] , Husting and Orr[32] have shown that direct control of journalists is a rare exception today. Instead control is represented by a kind of Darwinian selection process. Those "fittest for the job" survive by a top-down controled process influenced by their socialization, schooling, class conciousness, higher education, etc.[33].

Of concern was the way Ulfkotte implies that by revealing this incomplete and outdated information his life might be at danger, which makes it easy to question the mental health of those citing his "revelations":

"When I told the Frankfurter Allgemeine Zeitung that I would publish the book, their lawyers sent me a letter threatening with all legal consequences if I would publish any names or secrets – but I don’t mind. You see, I don’t have children to take care of. And you must know I was severely injured during the gas attack I witnessed in Iran in 1988. I’m the sole German survivor from a German poison gas attack. I’m still suffering from this. I’ve had three heart attacks. I don’t expect to live for more than a few years."

Ulfkotte reportedly died from a heart attack on 13 January 2017 at the age of 56, after a history of heart trouble.[2]