Document:Greenwald-Omidyar Joint Venture: The Blurring Lines Between Being A Source & Being A Journalist 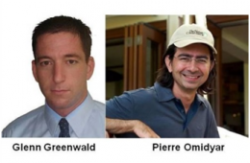 Greenwald-Omidyar Joint Venture: The Blurring Lines Between Being A Source & Being A Journalist

What Do Ethic Guidelines Say about Paying Sources for Information?

In the past, up until very recently, the field of journalism was viewed as having to remain outside and above the commoditization of high-value information and sources. Please don’t get me wrong. Journalists have been far from being independent or neutral, and their motives have always been in line and in harmony with the ruling class: government and major corporations. Whether for good or very bad, things are changing even further with the corporate media, and some unfortunately, for worse. Ethical guidelines for journalists and journalism appear to have lost all relevancy and application. Further, the lines that were once drawn separating journalists from sources-information have been blurring to a point where all you see is sand and no line. Nowhere is this more obvious than the recent business venture struck between billionaire corporatist mogul Pierre Omidyar and self-proclaimed journalist Glenn Greenwald.

This past summer NSA whistleblower Edward Snowden entrusted his 50,000+ documents with Glenn Greenwald and Laura Poitras [1]. He was a source who made a decision, good or bad, to provide the obtained documents, his incriminating information, to the duo. At that point, he removed himself as the primary source. At that point, Greenwald and Poitras became the information source.

To date, more than six months since the duo obtained the 50,000+ documents, only one percent (1%) has been released to the public. By choice, the duo decided to withhold the rest of the cache-99+% of their documents.

In October 2013 the billionaire owner of e-Bay and PayPal Corporation set up a brand new news corporation, and offered Greenwald and Poitras $250 million for these documents and information. And they accepted. [2]

Is Glenn Greenwald A Journalist or A Source in This Case?

A major conflict of interest and convoluted fact in this case stems from the presence of a blurry line between being a source (information source) and a journalist.

A broad definition of a journalist is summed up below:

A journalist is someone employed to regularly engage in gathering, processing, and disseminating (activities) news and information (output) to serve the public interest (social role). [3]

And here is a broad definition of a source in journalism:

In journalism, a source is a person, publication, or other document that gives timely information. Examples of sources include official records, publications or broadcasts, officials in government or business, organizations or corporations, witnesses of crime, accidents or other events, and people involved with or affected by a news event or issue.

Up until this stage, Glenn Greenwald had been known and worked as a commentator and a columnist. At no point in time was he hired or represented as a journalist. That is a fact, and it is recorded as such.

He did a decent job as a commentator and author. However, there is no record ever identifying him as a journalist. He was a paid columnist for Salon and Guardian until he came into possession of Edward Snowden’s 50,000-page document cache. Therefore, what did he become once he received the whistleblower’s evidence (documents), and was told to become the source to provide the documents to the public?

As far as the media was concerned, Greenwald then became the source to whom they went to gather information. The newspaper went to him to inquire of documents (information obtained by Edward Snowden), not as an Intelligence expert or a reporter. The networks brought him on as a witness, and of course, as a source.

Most importantly, the corporate mogul, Pierre Omidyar, the billionaire who owns e-Bay and PayPal, set up another corporation to acquire Glenn Greenwald as an exclusive source to be owned by his $250 million corporation.

Greenwald had been around for a decade as a pundit, columnist, writer. Yet, during these years, billionaires such as PayPal’s Omidyar had never expressed any interest in him. Same went for other corporate media outlets. Sure, Greenwald was a good author and a pundit, but to them he was not worthy of hiring with millions of dollars and employing as a journalist. So what gave? What did change in Greenwald’s value as a commodity?

There is only one thing that changed: he became a source. Once Snowden gave him the entire cache, he became the primary source. He became the man who possessed documented evidence that could expose not only the monstrous government and its illegal activities, but also monstrous corporations in cahoots with the government and its criminal activities.

Now, if you add to that PayPal Corporation’s stakes in this- its cooperation and partnership with the NSA in providing millions of people’s financial information and transaction data, then you are looking at Greenwald becoming a valuable commodity, someone worth spending $250 million for, for PayPal’s owner, the billionaire Pierre Omidyar.

This makes Greenwald a source, a valuable commodity, when it comes to his position and worth to PayPal Corporation’s Omidyar. Not a journalist. Not a columnist. But a source who possesses some extremely valuable and crucial information.

Now, let’s see how the journalistic ethics guide views sources that are paid and bought out. Shall we?

When it comes to payments to information sources in journalism Society of Professional Journalists’ Ethics Committee (SPJ) states the following: {{ Checkbook journalism, the practice of obtaining exclusive interviews by the roundabout method of licensing photos and videos, violates the SPJ Code of Ethics, which advises journalists to “act independently.” That includes being “wary of sources offering information for favors or money; avoid bidding for news.” [5] }} The following statement puts forth the unethical practice of paying sources bluntly and appropriately:

After all, it’s one of the Commandments of Good Journalism: Thou shalt not pay for information. Only the tabloids, of both the supermarket and TV variety, regard news as a tradable commodity.

“The standard line is news organizations don’t pay for information,” says Bob Steele, director of the ethics program at the Poynter Institute for Media Studies. “The public perceives that the information is tainted by financial motives…. They will discount the value of the information.“ [6]

SPJ’s guideline for the journalistic code of ethics makes it very clear that journalists must::

And why must we take checkbook journalism and its implications very seriously? Again, SPJ says it loud and clear:

Work for Hire is similar to “All Rights,” except that in this case, you have no claim to copyright at all. Most “work for hire” is done within the scope of employment, or when working for a commission. However, many publications also expect freelance writers to sign work-for-hire agreements. When you do this, you are transferring not just your rights but your actual copyright to the publication (or employer). You have no rights to the material, which can be altered, resold, published under another name, or used in any other fashion the publication desires, without additional compensation to you. [7]

In this case it is not Greenwald’s work or writing that is of any value to Billionaire Pierre Omidyar. As we have established, billionaires like him had never spent a penny on commentators and pundits like Greenwald. Omidyar’s corporation bought out Greenwald as a source, and established ownership and directorship of Snowden’s documents entrusted with Greenwald. Now, both remain as exclusive properties of PayPal Corporation’s owner.

On December 11, 2013, at 4:16 pm, after the publication of our report on NSA-PayPal partnership and long-going cooperation, Glenn Greenwald responded via twitter, and here is what he said-verbatim:

“I don’t doubt PayPal cooperates with NSA – that this is in the docs that we’ve been paid to withhold are total lies.”

Even Greenwald does not deny the fact that the billionaire’s PayPal Corporation is a major stakeholder in the release of the 50,000-page NSA cache. He stands to lose billions of dollars if the details of his corporation’s partnership and cooperation with the NSA were to be made public. What is $250 million spent to buy out the source and information compared to billions of dollars? How about gaining advantageous information that could help Omidyar and his corporations blackmail or marginalize their competitors such as Amazon? How about owning information that would allow Omidyar and his corporations to blackmail and or bribe the US Congress and government regulatory agencies for favors and special treatment in return?

You see, this is what I have been trying to accomplish despite all the vicious and ugly attacks from Glenn Greenwald and his supporters: to highlight the incredible conflict of interest, unethical practices, and grave consequences to transparency, whistleblowers, and the public’s right to know. I believe you must do the same: take them on: Greenwald, Billionaire Omidyar, and all others who have been conspiring to profit from yet censoring information that was obtained for you, the public, and your right to know.