In May 1975, the Bulletin of the Atomic Scientists reported that the United States had over 30,000 nuclear weapons at home, at sea, in Europe, and in Asia. Of these weapons, 8,500 were considered strategic weapons and 22,000 tactical weapons. The main difference between strategic and tactical nuclear weapons (TNW) is their range.[1][2][3] TNW include gravity bombs, short-range missiles, artillery shells, land mines, depth charges, so called mini-nukes and torpedoes which are equipped with nuclear warheads.[4]

In July 2017, the International Campaign to Abolish Nuclear Weapons (ICAN) estimated that the US had reduced its nuclear weapon stockpile to 6,800 warheads.[5]

According to the Treaty on the Non-Proliferation of Nuclear Weapons, those nations which have these weapons of mass destruction are obliged to try to prevent their spread and to eliminate their own holdings of these weapons. A nuclear war involving USA or Russia could quite possibly result in a nuclear winter and cause humans and most other life forms to go extinct.[6]

Nuclear weapons were first developed by the Manhattan Project in the USA and twice deployed on Japan at the end of World War II. Their creation and stockpiling was a major element in the cold war. At least 33,000 US citizens were killed by their development and mass production.[7] Many tens of thousands of other people were killed as a result of the nuclear tests carried out in remote locations such as Pacific islands.[8]

The development and wide deployment of MIRV technology (multiple independently targetable reentry vehicle) from the 1960s onwards worsened the situation, since the possible number of detonations in a war-scenario multiplied several times along with the increase in payloads. 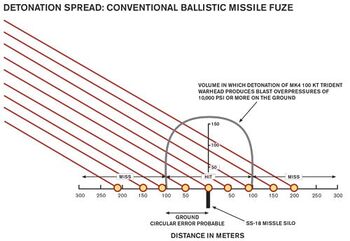 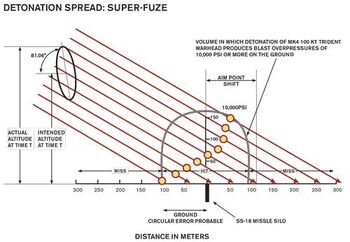 Hit pattern with the new fuze.

The nuclear forces modernization program, also life-extension program, is understood to be an effort to ensure the reliability and safety of warheads in the US nuclear arsenal, not to enhance military capabilities.

Since 2009 this program has implemented new technologies that will vastly increase the targeting capability of the US ballistic missile arsenal by a factor of roughly three. The so called "super-fuze" can adjust in flight (adjustable height-of-burst) to let the bomb detonate near, or over hardened targets in a distance that would still produce enough pressure to destroy them. Before only fuses with a fixed height were used, resulting in misses when the bomb over- or undershoots. Since the new technology is flexible and can adjust shortly before reaching the target, in connection with a change in aiming, the resulting trajectory of the missile makes it possible to reliably detonate the bomb in proximity to the target and build up enough pressure to destroy it. It enhances the capacity of the existing US ballistic missile forces by a factor of roughly three. Hans M. Kristensen and his co-authors for the The Bulletin explain:

“Before the invention of this new fuzing mechanism, even the most accurate ballistic missile warheads might not detonate close enough to targets hardened against nuclear attack to destroy them. But the new super-fuze is designed to destroy fixed targets by detonating above and around a target in a much more effective way. Warheads that would otherwise overfly a target and land too far away will now, because of the new fuzing system, detonate above the target.”
Hans M. Kristensen [9]

Which means that when three missiles were calculated to destroy one target (missile silo) before, now one will do in most cases do. Leaving room to direct two, or at least one, onto other targets. They further elaborate that:

“it creates exactly what one would expect to see, if a nuclear-armed state were planning to have the capacity to fight and win a nuclear war by disarming enemies with a surprise first strike”
Hans M. Kristensen [9]

and Kristensen writing at FAS adds:

“[...]the SSBN force, rather than simply being a stable retaliatory capability, with the new super-fuze increasingly will be seen as a front-line, first-strike weapon that is likely to further fuel trigger-happy, worst-case planning in other nuclear-armed states.”
Hans M. Kristensen [10] 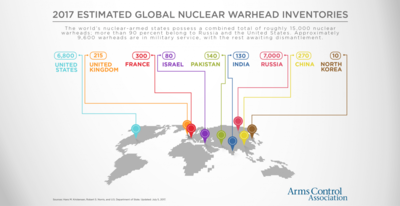 The United States conducted its first nuclear test explosion in July 1945 and dropped two atomic bombs on the cities of Hiroshima and Nagasaki in August 1945. Just four years later, the Soviet Union conducted its first nuclear test explosion. The United Kingdom (1952), France (1960), and China (1964) followed. Seeking to prevent the nuclear weapon ranks from expanding further, the United States and other like-minded states negotiated the nuclear Non-Proliferation Treaty (NPT) in 1968 and the Comprehensive Nuclear Test Ban Treaty (CTBT) in 1996.

India, Israel, and Pakistan never signed the NPT and possess nuclear arsenals. Iraq initiated a secret nuclear program under Saddam Hussein before the 1991 Persian Gulf War. North Korea announced its withdrawal from the NPT in January 2003 and has tested nuclear devices since that time. Iran and Libya have pursued secret nuclear activities in violation of the treaty’s terms, and Syria is suspected of having done the same. Still, nuclear non-proliferation successes outnumber failures and dire forecasts decades ago that the world would be home to dozens of states armed with nuclear weapons have not come to pass.

At the time the NPT was concluded, the nuclear stockpiles of both the United States and the Soviet Union/Russia numbered in the tens of thousands. Beginning in the 1970s, US and Soviet/Russian leaders negotiated a series of bilateral arms control agreements and initiatives that limited, and later helped to reduce, the size of their nuclear arsenals. Today, the United States and Russia each deploy more than 1,500 strategic warheads on several hundred bombers and missiles, and are modernising their nuclear delivery systems.

In 2010 the Pentagon revealed that the US had 5113 nuclear weapons, down from over 31,000 in the late 1960s. More recent FOIA requests to determine the current number have been denied, notwithstanding their claim that "increasing the transparency of global nuclear stockpiles is important to non-proliferation efforts".[12]

The only nation to have acquired but then given up nuclear weapons is South Africa. The exact fate of some of South Africa's weapons is uncertain, and rumours suggest that three of them were "misplaced".[13] 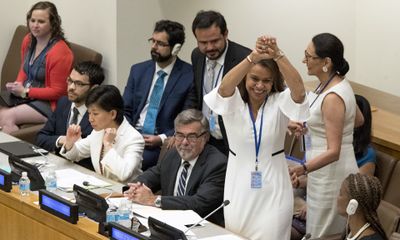 Elayne Whyte Gómez, president of the UN conference on banning nuclear weapons, after the vote to adopt the treaty

On 7 July 2017, the Nuclear Weapon Ban Treaty was endorsed by 122 countries at United Nations headquarters in New York after months of talks in the face of strong opposition from nuclear-armed states and their allies.[14] Only the Netherlands, which took part in the discussion, despite having US nuclear weapons on its territory, voted against the treaty.

All of the countries that bear nuclear arms and many others that either come under their protection or host weapons on their soil boycotted the negotiations. The most vocal critic of the discussions, the United States, pointed to the escalation of North Korea’s nuclear and ballistic missile programme as one reason to retain its nuclear capability.[15] The United Kingdom did not attend the talks despite government claims to support multilateral disarmament.

“It’s been seven decades since the world knew the power of destruction of nuclear weapons and since day one there was a call to prohibit nuclear weapons. This is a very clear statement that the international community wants to move to a completely different security paradigm that does not include nuclear weapons.”

The 10-page treaty on the prohibition of nuclear weapons will be open for signatures from any UN Member State on 20 September 2017 during the annual UN General Assembly. While countries that possess nuclear weapons are not expected to sign up any time soon, supporters of the treaty believe it marks an important step towards a nuclear-free world by banning the weapons under international law. Beatrice Fihn at ICAN in Geneva said:

“It’s a prohibition in line with other prohibitions on weapons of mass destruction. We banned biological weapons 45 years ago, we banned chemical weapons 25 years ago, and today we are banning nuclear weapons.” Within two years the treaty could have the 50-state ratifications that it needs to enter into international law, she said. Previous UN treaties have been effective even when key nations have failed to sign up to them. The US did not sign up to the landmines treaty, but has completely aligned its landmines policy to comply nonetheless. “These kinds of treaties have an impact that forces countries to change their behaviour. It is not going to happen fast, but it does affect them,” Fihn said. “We have seen on all other weapons that prohibition comes first, and then elimination. This is taking the first step towards elimination.”

Under the new treaty, signatory states must agree not to develop, test, manufacture or possess nuclear weapons, or threaten to use them, or allow any nuclear arms to be stationed on their territory.

Richard Moyes, managing director of Article 36, a UK organisation that works to prevent harm from nuclear and other weapons, said:

"The negotiations had made clear that a substantial number of states think that killing hundreds and thousands of people and poisoning their environment is morally wrong and that this should be reflected in law. The UK, along with other states that possess nuclear weapons, has chosen to boycott these talks, but the process has shown that any group of committed and concerned states can and should take collective responsibility to reject these horrific weapons.”

Instead of scrapping their nuclear stocks, the UK and other nuclear powers want to strengthen the 1968 nuclear Non-Proliferation Treaty (NPT), a pact that aims to prevent the spread of the weapons outside the original five nuclear powers: the US, Russia, Britain, France and China. It requires countries to hold back from nuclear weapons programmes in exchange for a commitment from the nuclear powers to move towards nuclear disarmament and to provide access to peaceful nuclear energy technology. The new treaty reflects a frustration among non-nuclear states that the NPT has not worked as hoped.[16]

A proper accounting of the risks of nuclear power reveals that its development was never economically justifiable, but was primarily intended as a method of deriving radioisotopes for use in nuclear weapons - explaining a lot of the lies and other hypocrisies which continue to surround the topic.[17]

Many alternative uses have been proposed for nuclear weapons, including bizarre ones such as the disruption of hurricanes, expedite excavation, generate power, rearrange the solar system or even to attempt to plug the leaking deep water horizon oil spill. No uses have proved feasible apart from the mass extermination of living beings.[18]

Nuclear weapons continue to pose a real risk of human extinction.[19] Even a confrontation between smaller nuclear powers such as India and Pakistan is predicted to have the potential to cause the death of several billion people due to changes in whether patterns and the cooling effect of smoke and dust.[20][21][22] In September 2019, due to the again erupted tensions over the Kashmir region, Pakistan's Prime Minister Imran Khan discussed in an Al Jazeera interview the potential use of the arsenal of his country in a situation of military defeat.[23] A situation that would likely occur in case of a full scale war, since India at present does have supremacy with its military over Pakistan.[24]