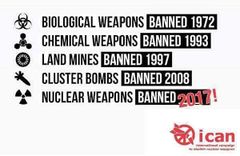 After a treaty banning nuclear weapons is approved at UN backed by 122 countries, Bill Ramsay examines the implications for Scottish and wider UK politics: "The Nuclear Weapons Ban Treaty, a Challenge for both the SNP and Labour".

An important aspect of the Corby narrative is the historical dimension. Two competing narratives have been slugging it out. One very personalised narrative, in a mainly hostile mainstream media focused upon alleged links to this group or that group. Another more institutional and in my view, a tad more empirical, has been looking back at the achievements of the Attlee government of 1945. A prominent example of this is Ken Loach’s "Spirit of 45".

On the other hand there is third narrative, also institutional and also looking back at something else the Attlee government built, namely the nuclear bomb.

In this aspect the Labour Party of Corbyn, is no different from every other iteration of the the Labour Party bar the of Michael Foot. Billy Bragg usefully reminds us there are different, more positive, English identities, that are sidelined, even ignored. However the nuclear thread has been strong in Labour since the bomb was invented and the 2017 manifesto makes it crystal clear that it is to remain.

However the prompt for this short essay is not Labour's nuclear legacy: it is the events that took place in the UN General Assembly last Friday when, in overwhelming numbers the Nuclear Weapon Ban Treaty passed into international law.

However the terms of the treaty present real challenges, not only for Corbyn’s Labour Party but for the Scottish National Party.

Only a fool would deny that the Labour Party has been reinvigorated by Jeremy Corbyn. His explicit social and economic policy positions made huge inroads amongst the working class in general and younger voters in particular.

However like Labour Foreign Secretary Ernest Bevin in the socially and economically radical 1945 Labour Government, Corbyn has made his Faustian pact with nukes and NATO. It is not only the the attitude of NATO and other nuclear armed states towards the NWBT negotiations that are at issue, indeed there response was predictable. Rather it was the behaviour of non-nuclear NATO members towards the NWBT that present particular challenges for the SNP.

There was a case (in my view a very weak case, certainly one I opposed) for the SNP to adopt a pro NATO position. This case prevailed by a 15-vote margin at the SNP conference in 2012, though one can only speculate what the result would have been had the then leadership not turned the vote into one of confidence in the leadership.

However the advent of the Nuclear Weapon Ban Treaty makes the SNP policy of support for NATO membership while opposition to nuclear weapons, contradictory. The reality of the negotiations at the General Assembly this year revealed that the treaty prevailed in the teeth of opposition from the North Atlantic Treaty Organisation. Non-nuclear members of NATO played a prominent and happily ultimately unsuccessful role in the resistance against the treaty.

This collective defence of nuclear weapons on show in New York last week by a broad range of NATO members, including the non-nuclear NATO states, finishes off the already weak case adopted by the 2012 SNP Conference when it opted for membership of NATO.

However it is important to stress that although a clincher, the NWBT of 2017 is not the only development that demands a change in the SNP’s NATO position. There have been important technological developments coupled to political developments that make abandonment of the NATO membership position by the SNP pressing.

England has had Corbyn and the world has President Trump, or to put it more directly, Donald Trump, Commander in Chief of the world's only military hegemon.

Ernest Bevin built the bomb for Labour. He believed its possession was an absolute necessity in the maintenance of the Great in Britain. He famously demanded that a Union Jack be painted on the side of the “British” bomb.

History proves that the paintwork is indeed British but since the Polaris Sales Agreement of 1962 the avionics of it and its Trident successors have been American.

The submarines that carry Britain's share of the common US/UK pool of Trident missiles, the Vanguard class submarines, may not be carbon copies of the US Navy’s equivalent, the Ohio class. However, the Trident missiles they carry are carbon copies. The missiles are stored together and reconditioned together at the home port of the US Navy’s ballistic missile submarine fleet in Kings Bay, Georgia.

I would argue that advances in cyber warfare capability means that it is virtually certain that US Cyber Command, budget $8 billion and growing, can override a UK Trident launch if a US President wishes so do so. President Obama may or may have opted to eliminate the so-called “independent” so called “deterrent” for Britain. Donald “America First” Trump may observe the diplomatic niceties in public. However, a post Brexit Britain, more reliant on the USA than at any time since 1941 can say nothing in public if Trump signs off a Cyber Command mission to effectively augment the US Navy’s 15 strong SLBM fleet with the four British subs.

In terms of the current pro NATO SNP position, the notion that an Independent Scotland, out with NATO, would be an isolated (the key argument of the pro NATO supporters in 2012) diplomatic pariah is absurd.

Finland and Sweden, who share borders with Russia are not members of NATO and do not propose to join NATO. They have close, indeed in the case of Sweden arguably intimate working relationships with NATO and use the threat, as opposed to the reality of NATO membership as diplomatic currency with their neighbours both to the East and the West. Are the SNP’s proponents of NATO membership seriously saying that the foreign ministry of a sovereign Scottish state would lack the intellectual ability to develop nuanced diplomatic tools? Note that both Finland and Sweden voted FOR the NWBT last Friday.

SNP branches have what is left of July to submit motions for consideration at this years SNP Conference to take place on Sunday 8th to Tuesday 10th October. Something like “Conference endorses the terms of the 2017 Nuclear Weapons Ban Treaty passed by the General Assembly of the United Nations of 7th July. Conference also resolves that it will put aside any prospect of joining the North Atlantic Treaty Organisation until an independent sovereign state fully complies with the NWBT”, could be a good starting point.