The 2001 Bilderberg Meeting was the 49th such meeting and had participants from __ European countries, the United States and Canada. It was held at Versailles, France.

The 2001 Bilderberg Agenda has not been leaked, but the website at Bilderberg Meetings has posted an agenda.

2. Consequences of the Italian Elections

3. What Does EU Enlargement Mean for the EU and the Rest of the World?

4. Productivity in Europe and the United States - Is the Gap Widening?

6. What Can the World Do About the Middle East?

7. The New US Administration

9. The Rise of China: Its Impact on Asia and the World

11. What Should Governments Do About Food Quality? 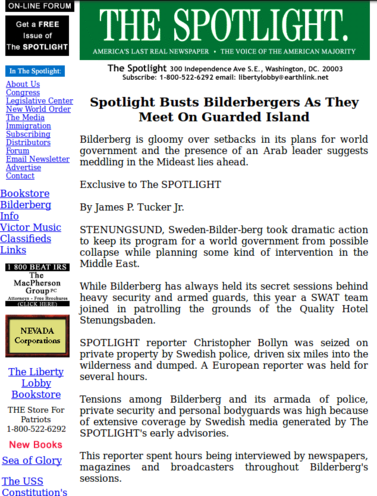 Online reporting about the 2001 Bilderberg

The 2001 Bilderberg was reported on using the WWW. On May 23, Reuters put out a press release describing the group as "a semi-secret discussion forum for the Western world's power elite".[1][2]