Legally mandated vaccination or "forced vaccination" has long understood to be a grievous infringement of freedom, but has been carried out in some countries, including in the US.[1][2] Mandatory vaccination of children has been the law in most countries for a long time, starting in Britain in the late 19th century[3], while forcible vaccinations of adults is a rare occurrence, generally seen as medically unethical - at least until the Covid-19 vaccine is rolled out.

Vaccines have regularly been made de facto mandatory in environments where existing power relations are highly imbalanced. Even if people are offered a theoretical chance to refuse, extreme pressures can brought to bear on them to try to compel them to submit. Employers might threaten to fire workers who did not submit to vaccination. Schools or other organisations might expel members who do not comply.

Soldiers are trained to be unflinchingly obedient, are generally young and in good physical health, so have been used the limits of what the human body can endure. In 1942, all military personnel received typhoid, smallpox, and tetanus vaccines, and soldiers who refused vaccination were subject to court-martials—a military legal principle originating in World War I and continuing to this day.[4]

In the Gulf War, soldiers developed so-called "Gulf War Syndrome". This was arguably also related to depleted uranium and/or exposure to other WMD, but many soldiers were given a lot of experimental vaccines, some under the pretext that they would protect them against Iraq's (phoney) WMDs.

There are some international legal principles that apply. The Nuremberg Code, is a set of ethical principles introduced as part of the verdict in 1946 in the Doctors' trial of the Nuremberg Tribunal after WW2. The Code, created after the horrors of the Nazi German medical experiments, states as its first principle that[5]:

This principle was continued and expanded in the UNESCO Universal Declaration on Bioethics and Human Rights, adopted by acclamation[6] at the UNESCO General Conference on 19 October 2005,[7], where it states in Article 3.2, that:

The UNESCO principles were incorporated in national law by some jurisdictions[Which?][citation needed], but is not a binding international treaty. Although accepted as a part of basic human rights by all UN member states in 2005, the declaration is expected to be ignored in the push for a Covid-19 mandatory vaccine.

Historically, many jurisdictions have recognised a religious exemption as valid groups to refuse a vaccination, although in 2021 some rolled back this option.[8]

In 1901, smallpox vaccinations were carried out at gunpoint in the US. During a 1901 smallpox vaccination raid in New York, 250 officers arrived at a Little Italy tenement house in the middle of the night and set about vaccinating everyone they could find. "There were scenes of policemen holding down men in their night robes while vaccinators began their work on their arms.[9]"[10]

In Middlesboro, Kentucky, the police and a group of vaccinators went into an African-American section of town, rounded up people outside this home, handcuffed the men and women and vaccinated them at gunpoint.

The battle between the government and the vocal anti-vaccinators was decided in a landmark 1902 Supreme Court decision, where the Supreme Court upheld the right of a state to order a vaccination for its population during an epidemic to protect the people from a devastating disease.

A 1902 US Supreme Court ruling "upheld the right of a state to order a vaccination for its population during an epidemic to protect the people from a devastating disease", although other restrictions were placed on this practice, conceding that vaccines are "unavoidably unsafe."[11] 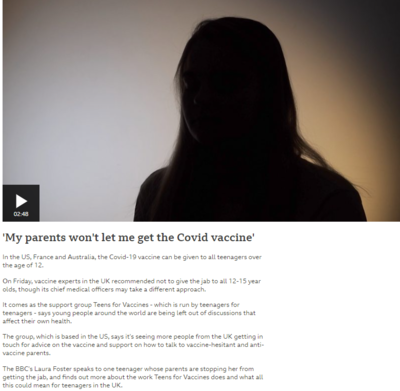 "Evil parents want the worst for their children" - The BBC. This was part of an article published on 4 September 2021, days before the UK chief medical officers will make the decision whether or not to inject healthy children with the COVID-19/Vaccine.[12]

Vaccination of children has been mandatory in many (most) countries for a long time. For example, Prussia (Germany) introduced a mandatory vaccine for children against smallpox in 1874.[13].

The general trend is ever more vaccines being mandatory, with a sharp increase after 1990[citation needed]. More recently, from 2018, parents in France were legally obliged to vaccinate their children[14]. The same year, Italy banned non-vaccinated children from attending state schools.[15], following a July 2017 law change which extended the number of mandatory vaccines from four to 10 vaccines for those aged 0–16 years[16].

Many jurisdictions gives the parents a possibility to say no to vaccination of their children[17], normally on religious grounds. A noticeable trend the last decade has been the restriction of this right, as the rhetoric against 'anti-vaxxers' heat up.

A bill passed in Washington DC October 2020, will give children as young as age 11 the right to get vaccinations against their parent's wishes and without their parents knowing, as long as the children get "age-appropriate" information.[18]

Until June 2016, California recognised personal beliefs to the except that they may offer an exemption from otherwise mandated vaccines. Reporting on vaccination rates in California, CNN reported in December 2015 that "Vaccine exemption percentages were higher in mostly white, high-income neighbourhoods such as Orange County, Santa Barbara and parts of the Bay Area."[19] In June 2015, California was passing legislation to ban unvaccinated kids from attending public schools.[20]

During COVID, promoted by the CCM. The BBC for example, has repeated government talking points.[21]

2015 Push towards US legal requirement

In February 2015 the US Department of Health and Human Services announced "The Adult Immunization Plan" which aims "to reduce racial and ethnic health disparities includes a measure to increase the percentage of the minority population who receive the seasonal influenza vaccination." It also stated that "All healthcare professionals must ensure that adult patients are fully immunized." It was criticised by some as being a step towards compulsory immunization.[22]

Natural News reported on March 1st 2015 that "A WhiteHouse.gov petition calling for the prohibition of laws requiring mandatory vaccines has been throttled by the White House, buried from public view and finally frozen for over 36 hours to prevent the petition from achieving 100,000 signatures". The tactic appears to have failed as by March 4th, the petition had over 111,000 signatures.[23]

The US tested an unknown number of vaccines on its armed forces, in reality a forced situation, resulting in "Gulf War syndrome". 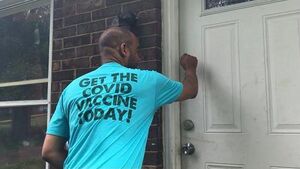 In 2021 Deep state actors in most countries in the world began an the overt phase of an intense campaign to prepare the ground for a globally mandated Covid-19 vaccine.

The campaign began in earnest after the population eager to take it had been exhausted. Legal considerations and medical science aspects such as natural immunity and the minimal risk the virus presents to youngsters were ignored, and strenuous efforts made to tighten the noose on so-called "vaccine hestitants".