The 2009 Queen's Day Attack occurred when one individual named Karst Roeland Tates drove through a crowd watching the parade of the royal family and ended in missing the Dutch royal family at about 10 meters crashing into a monument on the square in Apeldoorn instead. Tates killed 8, and went knock-out shortly after explaining to an officer that the reasoning for trying to kill the Royal family was that Prince "Willem-Alexander was a racist and a fascist". The attack resulted in permanently increased police powers and counterterrorism measures at public events.[1]

200 investigators have not found any definitive reasoning or trace why he attempted to kill the royal family on Queen Beatrix her birthday, marking him a lone wolf, "but not having a condition" if having been investigated earlier, remarking 7 people recalled moments he did hint these intentions, but nothing dangerous, with commercially-controlled media agreeing it will be a national mystery.

According to the Dutch State Investigation Service Tates "Suddenly decided to quit his job and stop his rent, lived in his car for a few days and decided to kill the royal family and at least a dozen of others because he thought Willem Alexander was racist, we don't know why. More powers for the police is what we need and let's forget about him further." Tates actually called his mother always as the first of her children to congratulate her on a birthday... one day before the attack, sounding "quite happy".

Tates drove his small Suzuki car through rows of attendants of the yearly royal parade of Queen's day, killing 8 people live on national-TV.

He was reportedly seen with binoculars timing the moment the open bus of the royal family would turn up on the road in Apeldoorn and hit the parade watchers with 112 km/h (70 mph) resulting in a barrier hitting his head and knocking him unconscious and his car severely damaged before hitting a monument 10m left of the open bus. The royal family - having a front row seat - saw the event happening and Queen Beatrix teary-eyed recited the attack on TV.[2]

The investigation noted his sole reasoning given to the first police officer that dodged him and arrested him hanging out of his car that "Willem-Alexander was a fascist and a racist", and confessing he wanted to hit the open bus. His only noted problem was his recent abuse of cannabis, but it was specifically noted he was not high at the time.[3] Some of Tates last words were spoken in German. Although he appeared to have spoken to some officers later that day as he did not die until the next night.

1. He did appear at times depressed and lost in life but not enough for a psychiatric condition.

2. There were signs that he had thought about this in his past, but we don't know if he actively tried to kill the royal family.

4. He didn't knew people would be standing at that side of the square, but we can't be sure he tried to evade the spectators.

5. He didn't act on behalf of radical or "extremist" motives, and nobody is really sure why he did it.

The definitive report from the Dutch Inspection for Order and Security mentioned one unknown man moved the fences on the part of the junction Tates would be coming from a few minutes before the attack. A Commander of the Army responsible for that part of the road told inspectors "there was no plan of fences" and "they told me everyone should just stand behind fences" explaining why the fences were not placed back in the original place which would've caused the victims to not stand on the place the car hit them: a long road leading up to the square, something denied by the general plan listed on 20 other pages of the report, which raises questions why Tates chose this road in the morning. The private security personnel failed to clear this part of the square.[5]

Apart from the secured mobile connection systems of the government failing at the exact moment Tates hit the crowd, dozens of traffic wardens responsible for the long roads leading to the square where Tates struck had no way of communicating with the police or other officials at all and couldn't alert anyone when Tates drove past them.[6]

Working for the Royal Family

Apparently, according to two different sources, one writer citing a security official and a close friend, Tates worked at a security firm for the royal family in the 2000s securing a castle during the renovation.[7] He got fired after pictures of the renovation were published. He took it personal that he was fired which seems strange given his dying remarks to the officer that escaped death and arrested Tates after hitting the monument that he wanted to hit "racist" Willem-Alexander. The authorities denied the allegations.[8]

The Dutch had never seen a "terror-attack" on live TV since the 70s. The closest they came to that was the filming of the dead body of Pim Fortuyn, which made the Dutch quite ashamed and not at ease with how to handle this. Not many activists or government-critics tried to do their own investigation, and Jan Peter Balkenende even refused to comment for the first months.

National security would never be the same again, and although the conclusive report[9] mentioned the local and state security officials didn't neglect or failed in following procedures before and after the attack it was noted the security personnel didn't expect a vehicular assault and were in a state of chaos on-site as their mobile communication systems didn't work, according to officials that wanted to remain anonymous[10], new chains of command should be implemented, with the National Coordinator for Security and Counterterrorism now being the leading organization in the new national police law[11], being also responsible for deciding the local, state and national threat levels in case of such events with public officials, even regardless of threat-levels, and the chains of command to work in separate confidential "rings". A decade after the events, it appears to be, the events have increased police powers which according to internal studies, didn't really have the desired effect and noted the increased ring of command with even classified private security personnel resulted in breaches[12][13], with the police able to send random individuals home, telling certain dissidents to stay home and creating a strategy of tension.[14] 35 intern police reports subsequently showed a massive amount of unstructured organization in the following decade as well.[15]

At the Remembrance of the Dead day of 2010 with the royal family and government officials in attendance, during the 2 minutes of silence, a man screamed on the Dam Square in Amsterdam resulting in a massive stampede of 5.000 people (including the royal family and the coalition government) and 87 injured spectators. [16] At the reveal of a monument for the deceased one year later, the mayor of Apeldoorn called the new measures "absurd", explaining the National Coordinator for Security and Counterterrorism employed at least 200% of the available police officers of the entire province, with the bill being several hundreds of thousands of Euros per event (even the ones having no spectators), with inhabitants having to move their own cars from their homes when deemed to close to the monument this time, and noted that all these officers would not be able to perform work for the next 24 hours due to labour laws.[17] Many people noted and voiced their opinion on newly found social media platforms that his usage of cannabis and the bottle seen in his car at the time of his arrest as a message that the Dutch drug policy needed or would end by public opinion as multiple high prolific murderers during the time were all using cannabis. 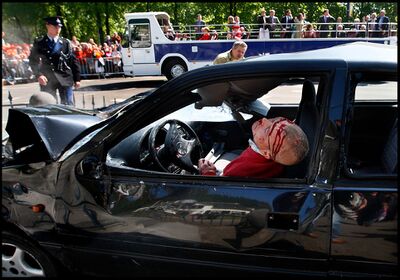 Tates unconscious with the royal family (and Queen Beatrix sitting, and smiling as seen in other footage)

Several questions still remain. Did Tates actually work for that security firm? Why did he suddenly quit his job and leave his house? What did he mean by his last words? Why didn't he leave any letter for his family? Why did the local police reject the idea of the attack with a car? Tates could've not actually killed the open bus by hitting it, as there were even more secret service agents sitting in the bus and he was unarmed. So, why did a man - who was not under the influence, nor mentally disabled - attempt this? According to two police officers, he spoke to them during his transport to the hospital, why did they not question him with these questions knowing he would die from brain-trauma within the next few days, which you could guess by looking at his car? Why did the local security officials just put one fence on the street where Tates entered the road leading to the square where he drove up to 120 km/h on, and why was there no officer standing along that road that could've reported someone attempting to hit his engine rev limit?

Was the attack an attempt to shift the public opinion for the continuation for the war on terror and war in Iraq or Afghanistan, at a point where Jan Peter Balkenende got cornered in parliament for not having support? A Wikileaks memo specifically acknowledged how "he kept his country a partner of the US in the middle east in fragmented Dutch politics".[18] The US diplomats mentioned Balkenende coalition partner Wouter Bos tried to make Afghanistan and pulling out of it a breakpoint to voters as most socialists were already against the war.[19]

Some other questions were never answered either; 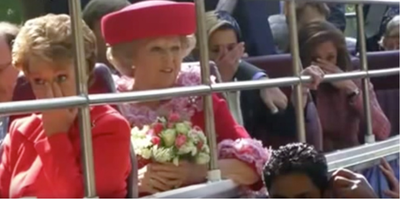 Why exactly was Beatrix smiling[20] here?)

One speculative piece also mentioned a very telling point; Tates was seen with binoculars timing the moment from the road where he would drive up to the square. If so, how did he not realize he couldn't see the open bus when attempting his attack due to the amounts of trucks, an army tank and jeep and the crowd blocking his view along with his... "small weapon"? How did - if he acted alone - even time it right when the bus route was 20 minutes delayed, as his radio must have had a delay if that was his cue as his Suzuki had the radio missing, but Tates was precisely on time. The piece recalled Ole Dammegård lectures and concluded the attack was a false flag. [21]

Most of the questions will never be answered while the Dutch join the culture of fear and seemingly continued this weird trend of vehicular assaults in Europe in the 2010s.