The Money Trust (also called The Money Power) was a cabal of bankers at the heart of the US Deep state around a century ago. Their control over the US government was evidenced by their capture of the immense profits stemming from control of the US dollar. This moved from public to private ownership in 1913 with the passing of the Federal Reserve Act. These allowed the group to further tighten their control over Wall St and the US economy, leading eventually to the great depression of the 1930s during which they staged a failed fascist coup, The Business Plot. Although successful at avoiding prosecution, this damaged their credibility as an effective state, and World War II was to shift the locus of power towards the Georgetown Set and its associated intelligence agencies. 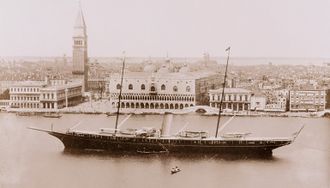 The deep state milieux used by The Money Trust we more local and transient, less international than those use by deep states, reflecting the restricted travel options available. Dining clubs were popular in the US. An important exception to their parochial nature was The Pilgrims Society.

The Pilgrims Society, begun in 1902 in UK, is a deep state milieu populated largely by financiers. On 13 January 1903 at the Waldorf Astoria Hotel in New York, a US chapter was inaugurated, which continues to this day and has a reciprocal membership arrangement with the UK group.

Skull and Bones, a secret society at Yale University was important in the development of The Money Trust, as were others to a lesser extent. In the 1880s the group set up the American Historical Association and the American Economic Association to help control the narrative and hide their influence.[1]

Sullivan & Cromwell, the New York based law firm, did important work for The Money Trust, a relationship which went at least as far back as 1882 when they assisted J. P. Morgan in the establishment of Edison General Electric and in 1901 assisted in the formation of U.S. Steel.[2]

Cromwell developed the concept of a holding company, which The Money Trust helped introduce into the law of the state of New Jersey. This was effective in reducing the effectiveness of antitrust laws.[3] 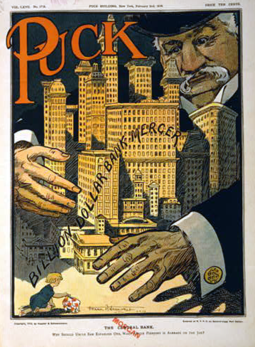 A 1907 cartoon of J. P. Morgan seizing control of banks

The activities of the Money Trust were focused not only on self-enrichment, but on securing their privilege by using control of the US government to implement legal protections. Often they were duplicitous in playing both sides and misrepresenting their purposes.

Edward Mandell House was Woodrow Wilson's handler for The Money Trust. He was so close to Wilson that he lived at the White House for some time, and managed the US President on their behalf.

The Money Trust organised the 1907 Panic. This strengthened their control over Wall St by enriching the trust's members, who had advance warning, and by impoverishing or bankrupting others, notably Frederick Heinze who was not member of the cabal.[4]

The Aldrich Plan aimed to wrest control over the production of money from the US government and place it under control of The Trust. It was defeated.

After the failure of The Aldrich Plan, the money trust arranged for the 1910 Jekyll Island meeting to devise an alternative. This rebranded it as the Federal Reserve System, which paid more attention to the appearance of federalisation, but was essentially similar. Some Money Trust members publicly opposed it, in order to hide this fact. The Federal Reserve Act was passed just before Christmas, 1913, when many senators had already gone home for Christmas. 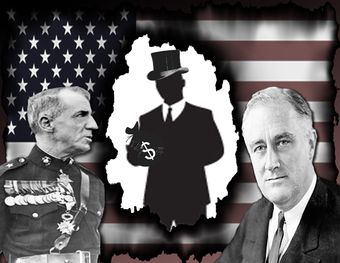 In the 1930s, fascism was on the rise in Europe, an attractive development in the eyes of some leaders of large corporations and members of The Money Trust. In 1933, B bond trader, Gerald MacGuire, approached General Smedley Butler, to sound him out for a role as a potential figurehead for a military coup, to be carried out on grounds of FDR's failing health. Butler, however,wanted nopart of it, though he feigned interest and gathered evidence which he later presented to the McCormack-Dickstein Committee.[5] Once alerted to the coup plan, FDR apparently cut a secret deal with the leaders: they would back his new deal and in return he halted the investigation and censored the names of the senior leaders. As a result, the plot is relatively little known today, but the power of The Money Trust was greatly weakened.

The Great Depression was created by manipulation of the US money supply which post-1913 was under the control of The Trust. Inflation of money in circulation lead to the "roaring 20s", which ended abruptly in 1929 when the creation of currency was tightened.[citation needed] After a decade of financial hardship, WW2 shook up the old order. Post WWII, the Georgetown Set set up the OPC and CIA, peacetime replacements for the more ad hoc wartime intelligence agencies and institutionalisations of the Cold War permanent war mentality.

At least in terms of wealth, J. P. Morgan led The Money Trust.

This power of the Money Trust was investigated in the US by the Pujo Committee from 1912 to 1913. The report unanimously declared that a small cabal of financiers had gained consolidated control of numerous industries through the abuse of the public trust. The chair of the House Committee on Banking and Currency, Representative Arsène Pujo convened a special committee to investigate a "money trust", the de facto monopoly of Morgan and New York's other most powerful bankers. The committee issued a scathing report on the banking trade, and found that the officers of J.P. Morgan & Co. also sat on the boards of directors of 112 corporations with a market capitalization of $22.5 billion (the total capitalization of the New York Stock Exchange was then estimated at $26.5 billion).[6]